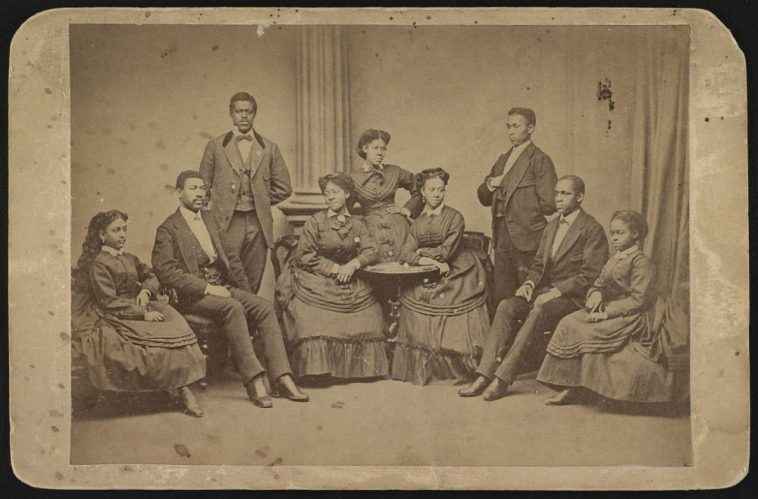 From the moment of capture, through the treacherous middle passage, after the final sale and throughout life in North America, the experience of enslaved Africans who first arrived at Jamestown, Virginia, some 400 years ago, was characterized by loss, terror and abuse.

The Abolition of the Slave Trade Act of 1807 made it illegal to buy and sell people in British colonies, but in the independent United States slavery remained a prominent – and legal – practice until December 1865. From this tragic backdrop one of the most poignant American musical genres, the Negro spiritual, was birthed.

Sometimes called slave songs, jubilees and sorrow songs, spirituals were created out of, and spoke directly to, the black experience in America prior to the Emancipation Proclamation of 1863, that declared all slaves free.

Spirituals have been a part of my life from childhood. In small churches in Virginia and North Carolina, we sang the songs of our ancestors, drawing strength and hope. I went on to study, perform and teach the spiritual for over 40 years to people across the U.S. and in various parts of the world.

Despite attempts, white slave-owners could not strip Africans of their culture. Even with a new language, English, and without familiar instruments, the enslaved people turned the peculiarities of African musical expressions into the African American sound.

Rhythms were complex and marked by syncopation, an accent on the weak beat. Call-and-response, a technique rooted in sub-Saharan West African culture, was frequently employed in spirituals. Call-and-response is very much like a conversation – the leader makes a statement or asks a question and others answer or expound.

In Africa, drums were used to communicate from village to village because they could be used to mimic the inflection of voices.

As early as 1739 in the British colonies, drums were prohibited by law and characterized as weapons in an attempt to prevent slaves from building community and inciting rebellion.

As a result, enslaved people “played” drum patterns on the body. Hands clapped, feet stomped, bodies swayed and mouths provided sophisticated rhythmic patterns. This can be observed in Hambone, an example of improvised body music.

Some spirituals were derived from African melodies. Others were “new,” freely composed songs with a melodic phrase borrowed from here and a rhythmic pattern from there – all combined to create an highly improvised form.

The spiritual was deeply rooted in the oral tradition and often created spontaneously, one person starting a tune and another joining until a new song was added to the community repertoire. The sophisticated result was beautifully described in 1862 by Philadelphia musicologist and piano teacher Lucy McKim Garrison.

“It is difficult to express the entire character of these negro ballads by mere musical notes and signs,” she said. “The odd turns made in the throat; the curious rhythmic effect produced by single voices chiming in at different irregular intervals, seem almost as impossible to place on score.”

Textually, the spiritual drew from the Hebrew-Christian Bible, particularly the Old Testament, with its stories of deliverance and liberation. Songs like “Go Down Moses” direct the awaited deliverer to “go down” to Southern plantations and “tell ole Pharaoh” – the masters – to “let my people go.”

For the slaves, the spiritual proved to be an ingenious tool used to counter senseless brutality and the denial of personhood. In order to survive emotionally, resilience was critical. In the spirituals, slaves sang out their struggle, weariness, loneliness, sorrow, hope and determination for a new and better life.

Yet these are not songs of anger. They are songs of survival that voice an unwavering belief in their own humanity and attest to an abiding faith in the ultimate triumph of good over systemic evil.

Interspersed within these seemingly hopeless texts are phrases that reflect the heart’s hope: the words “true believer” amid the acknowledgment that “sometimes I feel like a motherless child,” for example; and “glory, hallelujah” interjected after the text, “nobody knows the trouble I see.”

Songs declaring, “I’ve got a crown up in a dat kingdom. Ain’t a dat good news” proclaimed the certainty of a future hope totally unlike the day-to-day reality of enslavement.

People whose every movement was dictated audaciously declared, “I’ve got shoes. You’ve got shoes. All God’s children got shoes. When I get to heaven gonna put on my shoes, gonna walk all over God’s heaven.” In the same song they denounced the hypocrisy of the slaveholders’ religion: “Everybody talkin’ ‘bout heaven ain’t going there.”

Spirituals weren’t simply religious music. In his seminal work, “Narrative Of The Life of Frederick Douglass An American Slave,” published in 1845, the abolitionist explains,

“they were tones loud, long, and deep; they breathed the prayer and complaint of souls boiling over with the bitterest anguish. Every tone was a testimony against slavery, and a prayer to God for deliverance from chains.”

The spirituals were also acts of rebellion. They were used to organize clandestine meetings, and announce activities of the Underground Railroad. For example, songs like “Great Camp Meeting,” were used to announce when secret gatherings were being planned.

The spiritual served as a mediator between the dissonance of oppression and the belief that there was “a bright side somewhere.”

Four hundred years after the birth of slavery, as the world still struggles with racial division, injustice and a sense of hopelessness, spirituals can teach how to build hope in the face of despair and challenge the status quo.