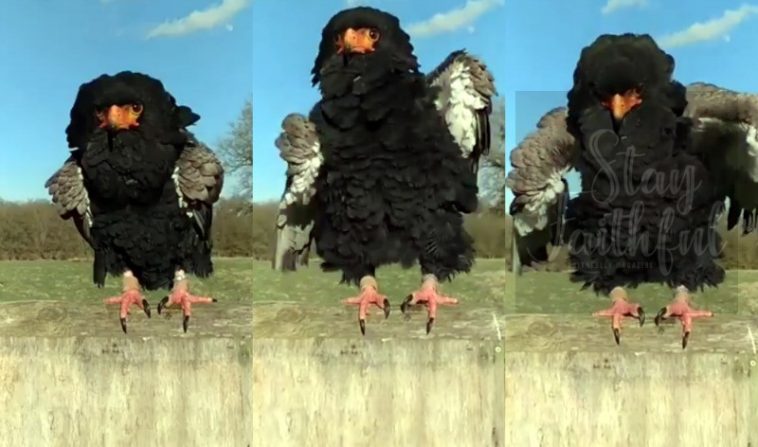 I came across a gif on Twitter Monday night (July 15) purporting to show the beautiful bateleur African eagle performing a mating dance. The tweet, dated March 14, 2019, is actually not where the bateleur eagle dance gif originated. Neither is the bateleur eagle shown doing a mating dance. Here’s the scoop that will, hopefully, set the record straight and end all debates about whether the video is “real” or “fake.”

Actually, this isn’t much of a scoop. The original video of the bateleur eagle “dancing” is from 2018. However, the fact that it’s still causing confusion more than a year later simply means no one took the time to address their concerns about how “real” or “fake” this awesome video is.

This issue also highlights another serious problem with social media nowadays ⁠— no one likes to give credit where it’s due. If the original source of the video had been maintained as people picked it up and re-posted it (passing it off as their own), there wouldn’t be a debate about the bateleur eagle dance supposedly being fake.

This is the tweet I saw Monday night of the bateleur eagle performing a “mating dance.”

Bateleur is an African Eagle with long wings and very short tail. It is a colourful raptor, and one of the most beautifu: it performs this mating-dance on the ground, in order to expose its beautiful coloured plumage https://t.co/Vg5W8dgUil pic.twitter.com/oRSLZbfi5y

After googling around briefly to see if I could find other posts and information on the video to discern its authenticity, I decided to believe that the video showed an actual bateleur African eagle doing what the description said it was doing. 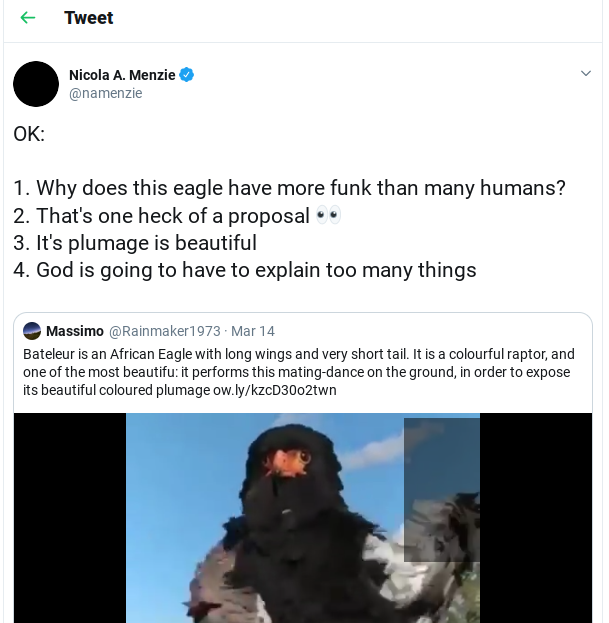 However, the following morning, a Twitter friend suggested that the video was, in fact, fake. I wasn’t convinced. Sure, the angle of the camera and proximity to the bird seems a little exaggerated, but those look like actual bird feathers, actual moving bird eyes, etc. to me. The video may be somewhat manipulated, I thought, but the contents seem too real. So I went digging again.

The gif / video of the bateleur eagle dancing sparked debate far and wide, that is, on Twitter and Reddit :). I at least expected the good folks at Reddit would have crowd-solved the mystery. But confusion was rife there as well. Many seemed convinced the video was of some guy in a (really well-made, practically authentic) bateleur eagle “bird suit.”

So I Googled “bateleur eagle dance” again and tried to just focus on videos. I learned that bateleur eagles like to eat snakes, tend to have the same mating partner for life, and prefer to use the same nest for a very long time.

But then I found a Twitter post dated April 10, 2019 ⁠— the gif / video had been in heavy rotation online since March. The tweet was by Paul Brooks, who did, in fact, point to the source of the video.

Brooks’s link sends folks to the Instagram account for The Raptor Centre, a U.K. sanctuary for birds of prey founded in 1977.

The Raptor Centre’s page features dozens of photos of beautiful eagles, owls, and other birds along with human caretakers. Once you start scrolling through, this guy should catch your eye…

This is Rags, our friend from the viral bateleur “mating dance” video.

Scroll down a bit more and you’ll find the original video of Rags, dated April 2, 2018, doing an intricate movement common only to bateleur eagles :).

Yes, Rags the sleepy bateleur eagle is simply shaking himself — not looking to attract any female attention.

As the Instagram caption explains, the video of the bateleur eagle dance has been slowed down, with a bit of music added on for a fun effect.

So, sure, the video is “fake” in the sense that it’s: not at actual speed and not a bateleur eagle mating dance.

Don’t know about you, but I like the “fake” aspect of this bateleur “mating dance” video. Otherwise, we’d just have a sleepy bird shaking himself awake (although, if you watch the bateleur Instagram video at any speed, it’s still interesting).

Faithfully Magazine started 2016/2017 with the mission to keep Christian media diverse by centering our content on Christian communities of color for an ethnically-inclusive audience. In that time, we’ve made an impact on Christian media and achieved meaningful milestones -- such as creating a volunteer Associate Editor role, launching an Editorial Fellowship, and proudly paying our contributing writers. But we need your support to keep going. In addition to partnering with advertisers, nurturing a subscription/membership, and exploring paid live events, we rely on the generosity of readers who see value in our work and in our mission. We invite you to join us, and keep walking with us, in our mission. Every amount, big or small, empowers us to stay the course. Here are a few ways you can join us: We are grateful for your support. Thank you!

Join us for a live chat on 'If God Still Breathes, Why Can't I?' Dismiss