What Does the Bible Say About Race and Skin Color?

What Does the Bible Say About Race and Skin Color? 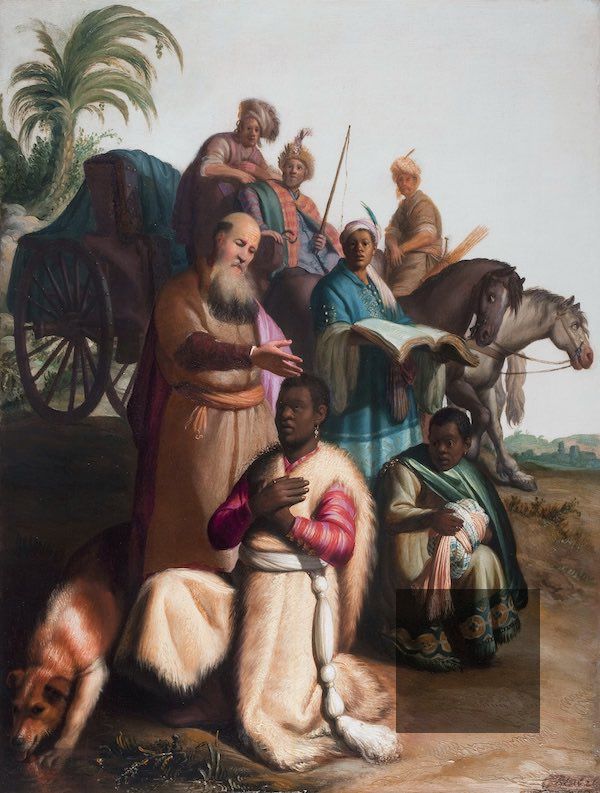 "The Baptism of the Eunuch" by Rembrandt Harmenszoon van Rijn (Photo: Wikimedia Commons)

Scholars in the field of race define racism not as the recognition of racial differences but ascribing value to certain differences over others. Foundational to the work of anti-racism is upending beliefs and ideas that artificially place value upon certain racial differences at the expense of others.

Christians living in the midst of a racialized society should rightfully ask what the Bible says about race and skin color. Does the Bible itself place a higher value on certain skin colors than others? And if not, where does this idea come from?

Dr. Roger Barrier, founder of Preach It, Teach It, offers insights into how the Bible addresses the question of skin color and explains how misguided readers of the Bible invented a “Curse of Ham” in order to justify the institution of slavery.

By Dr. Roger Barrier, Preach It, Teach It.

Skin colors are a nonissue in the Bible. Skin colors are also a nonissue in the human genome. Of the 30,000 to 40,000 genes embedded in human DNA, only a very few have anything to do with skin color. In fact, when we consider the incredible multiplicity of possibilities as genes turn on and off and act upon each other (homeotic genes) we are struck by the infinitesimally small number of genes involved in producing skin color! Truly, skin color is only skin deep.

“…when we consider the incredible multiplicity of possibilities as genes turn on and off and act upon each other (homeotic genes) we are struck by the infinitesimally small number of genes involved in producing skin color! Truly, skin color is only skin deep.”

All races are basically alike in mental, emotion, and physical makeup. Skin color is only cosmetic. Imagine all the pain, hurt, and anguish that have come to mankind over things no more genetically important than blusher and eyeshadow.

As far as I know, varying skin colors are never expressly mentioned in the Bible. Inferences are made today, but no single skin color can be identified in the Scriptures.

Some assume that the Queen of Sheba who visited Solomon was Black because she was from the country of Sheba. But Sheba is not in Africa. It was Abyssinia, which is located in southwest Arabia on the eastern tip of the Red Sea (1 Kings 10:1-13).

Others have taught that Solomon’s first wife was Black because she mentioned her “dark skin.” She sang in Song of Solomon 1:5-6: “Dark am I, yet lovely, O daughters of Jerusalem, dark like the tents of Kedar, like the tent curtains of Solomon. Do not stare at me because I am dark, because I am darkened by the sun.” Notice that even a cursory reading reveals that her skin color was not black; she was deeply sunburned from working outdoors in the fields.

Others have taught that the Ethiopian Eunuch who was baptized by Philip in Acts 8 was Black. The Bible never says this. We just assume that he was Black because he was from that African nation! He probably was Black—although the Bible never says.

Both Esau (Genesis 25:25) and David (1 Samuel 16:12) are mentioned as having “ruddy” or “red” complexions. This obviously refers to a reddening of their Middle Eastern-olive-skin tones. In fact, many say that both Esau and David had red hair and probably freckles to go with their redden skin. It is interesting to note that David’s son, Solomon, was also described as of “ruddy” complexion (Song of Solomon 5:10).

The Bible never uses any skin colors or tones as indicators of racial or ethnic affiliation.

The Table of Nations

The table of nations is listed for us in Genesis 10. By the way, this listing of nations (read races) occurs before the Tower of Babel story of the scattering of the races as related in Genesis 11. The order here is of little significance. The list is given and then the next chapters detail how the migrations began. In the listing we see that the descendants of Noah’s three sons, Shem, Ham and Japheth, migrated to different parts of the world after the subsiding of the Flood.

We know from the countries mentioned that Shem fathered the Semitic peoples who are considered Jewish or Arabic. His descendants settled throughout the Mideast and southern Asia.

Japheth fathered the Japhethite peoples who moved northward into Turkey and Russia and then migrated into Europe and across much of Asia. Today, most of these people are identified as white-skinned Caucasian or browned-skinned Asians and Mongolians or more yellow-skinned Chinese.

Ham fathered the Hamitic peoples. His descendants settled from Canaan southward into Egypt and Africa.

Invention of the ‘Curse of Ham’

A curious belief has arisen among some people about the origin of black-skin coloring. In Genesis 9:20-25 Ham is cursed by his father Noah for his dishonoring Noah in a situation regarding one of Noah’s drunken stupors. Some think Ham and his descendants were cursed with black skin.

Some of Ham’s descendants, Cush and Put, for example, settled in Africa in the present-day countries of Ethiopia and Libya. These misguided people conclude that Cush and Put spread their black skin throughout Africa. Therefore, they conclude that Black Africans are a cursed race and thus inferior to White races. The fact that Ham had many other sons who did not settle in Africa is ignored by them.

This awful premise was often invoked by White people in the Southern United States as biblical “proof” to justify the institution of slavery. In fact, in “Dred Scott v. Sanford” in 1856 and a series of other cases, the U.S. Supreme Court ruled that Black slaves could not be citizens, were not real human beings and thus had no protection under the U.S. Constitution. Furthermore, other rulings concluded that slaves were nothing more or less than the property of their owners—little different from horses and plows.

Horribly, many Southern preachers and Christians used this line of reasoning to circumvent the idea that slaves were to be treated as equals for whom Christ died a substitutionary death on the cross. This is not to say that all Southern Christians agreed with this concept. Some repudiated it fiercely! Many operated underground railroads to move runaway slaves to “safety” in the North.

“Different skin colors are not a curse. They are life giving.”

Different skin colors are not a curse. They are life giving. Certainly you have noticed that as we move farther north from the hot Tropics, to the more moderate Temperate Zones, to the frigid Arctic, skin colors gradually morph from deep black to pale white (except for the Eskimos—but that is another story).

Why is there such a variety of skin colors and shades? No one knows for certain. Multiple reasons exist. Let me mention two.

Melanin acts as a sunscreen and protects the skin from ultraviolet light. Since the deadly skin cancer melanoma often results from extreme exposure to the sun, dark skin with more melanin effectively limits the effects of long exposure to the sun, thus reducing the risk of skin cancer. By the way, freckles, which occur in people of all races, are small, concentrated areas of increased melanin production.

Another reason for varying skin colors probably involves the human need for Vitamin D. A certain amount of ultraviolet radiation is necessary for the body to produce Vitamin D. Approximately 90 percent of Vitamin D is synthesized in the skin. The remaining 10 percent comes from foods such as fatty fish and egg yolks. The lighter the skin color, the quicker Vitamin D is absorbed. Since the higher latitudes get much less sun than the tropics, light-colored skin enables people to quickly absorb Vitamin D. By the way, too much ultraviolet radiation may cause the breakdown of folic acid, which can cause anemia. Too little Vitamin D can bring on rickets in children and osteoporosis in adults. This is another reason why dark skin is advantageous in the tropics and light skin is such a boon for those living in the Arctic.

Editor’s note: A version of this article was published on Preach It, Teach It.