Black Church Survey: What Black Christians Really Think About the Church and Their Pastor

Black Church Survey: What Black Christians Really Think About the Church and Their Pastor

Most Black churchgoers view pastors of African American churches as “the most important leaders within the Black community,” according to a survey by Barna Group.

In its “State of the Black Church” project, the Christian polling firm reveals data from its extensive research on the Black church.

In addition to thoughts on Black pastors, the survey explores African Americans’ sentiments on church involvement, the place of faith in their lives, and how they view the Black church.

Below are a few charts that reveal some of Barna’s findings on how Black Americans really feel when it comes to the Black church.

In the past 24 years, Black Americans’ general view of the place of Black church pastors has improved, with 69 percent agreeing that “The pastors of African American churches are the most important leaders within the Black community.” Sixty-three percent of Black Americans agreed with that view in 1996.

As Kenyatta R. Gilbert of Howard University explains, the Black pastor/preacher emerged out of necessity due to slavery and racism.

“In slave society, [B]lack preachers played an important role in the community: they acted as seers interpreting the significance of events; as pastors calling for unity and solidarity; and as messianic figures provoking the first stirrings of resentment against oppressors,” Gilbert states.

Their role took on added significance throughout the Great Awakening of the 18th century, after Reconstruction, and during the Civil Rights Movement.

Based on this chart, Black church attendees today (77 percent) hold the highest view of the place of Black church pastors in their communities.

However, as a second separate chart shows, Black churchgoers born between 1946 and 1964 (Boomers) are least likely to “agree strongly” that Black church pastors are the most important leaders in the Black community (33 percent). 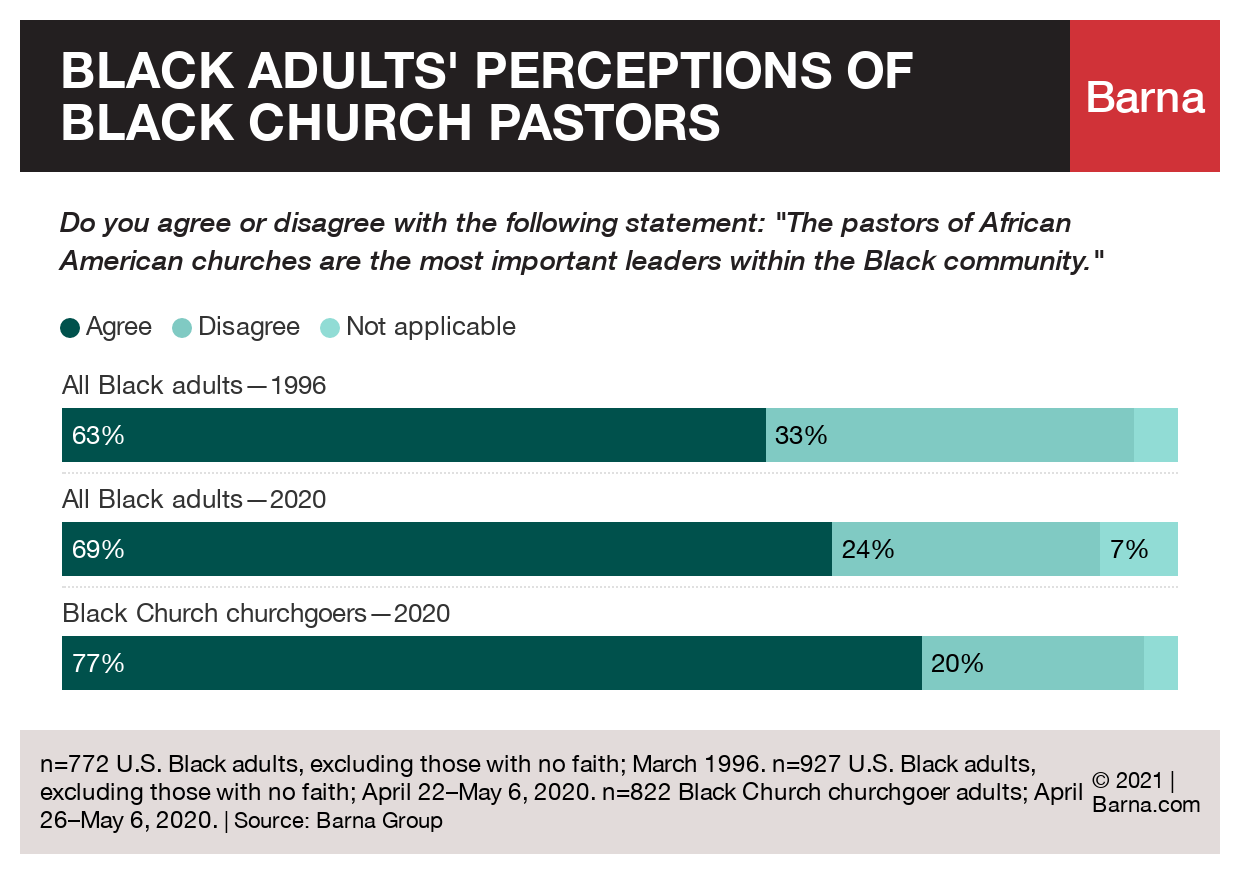 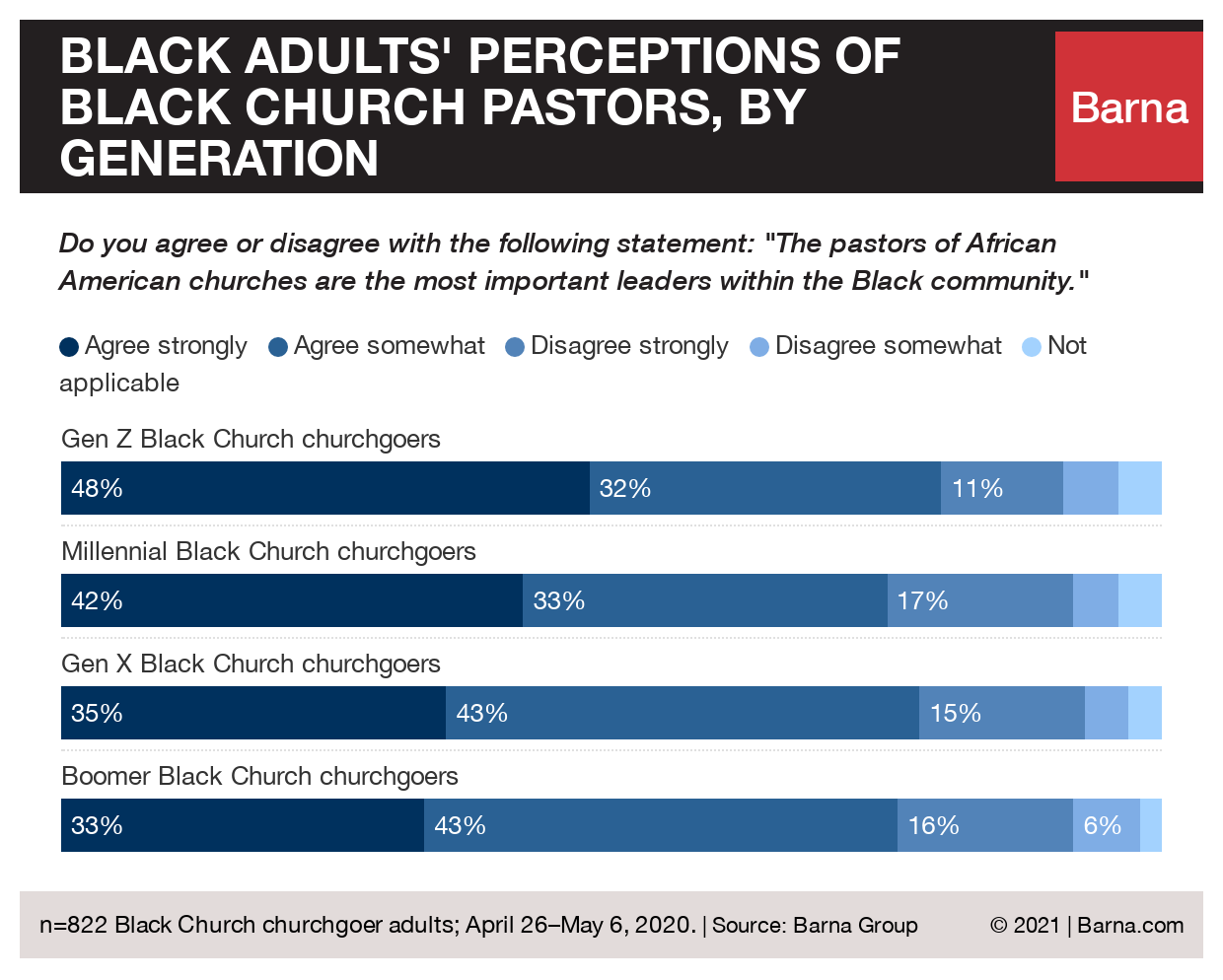 The Black Church as a Place of Safety and Healing

Black church attendees appear middle-of-the-road when it comes to whether they find the Black church “reliable” or “unreliable;” “safe” or “unsafe;” and “healing” or “damaging.” Yet, a strong segment does think of the Black church as “important” (42 percent) and “safe” (40 percent). 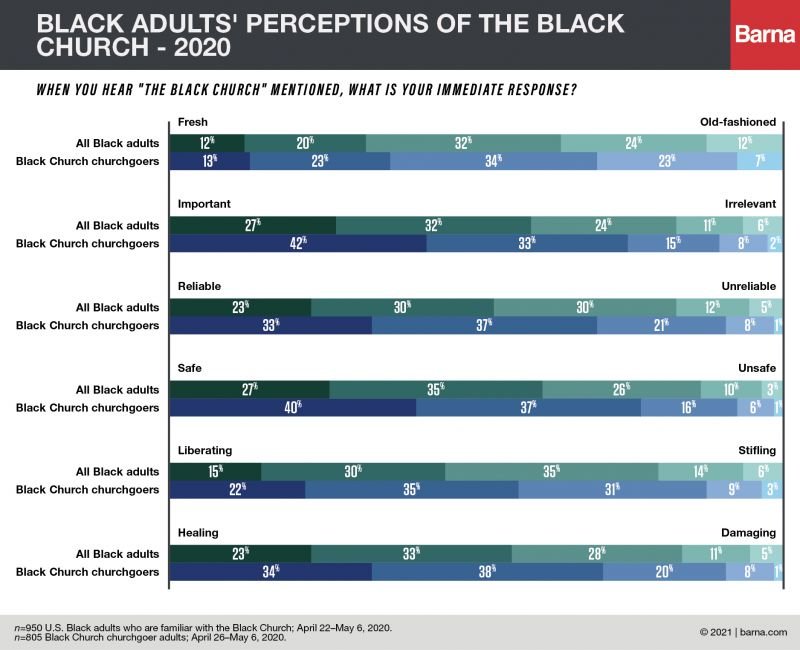 Most Black adults today (79 percent) maintain the view that understanding the African American experience and the role of religious faith in Black people’s lives go hand-in-hand.

Black church churchgoers are the segment most likely to feel this way (88 percent)—as programs like “The Black Church” documentary from PBS make abundantly clear. 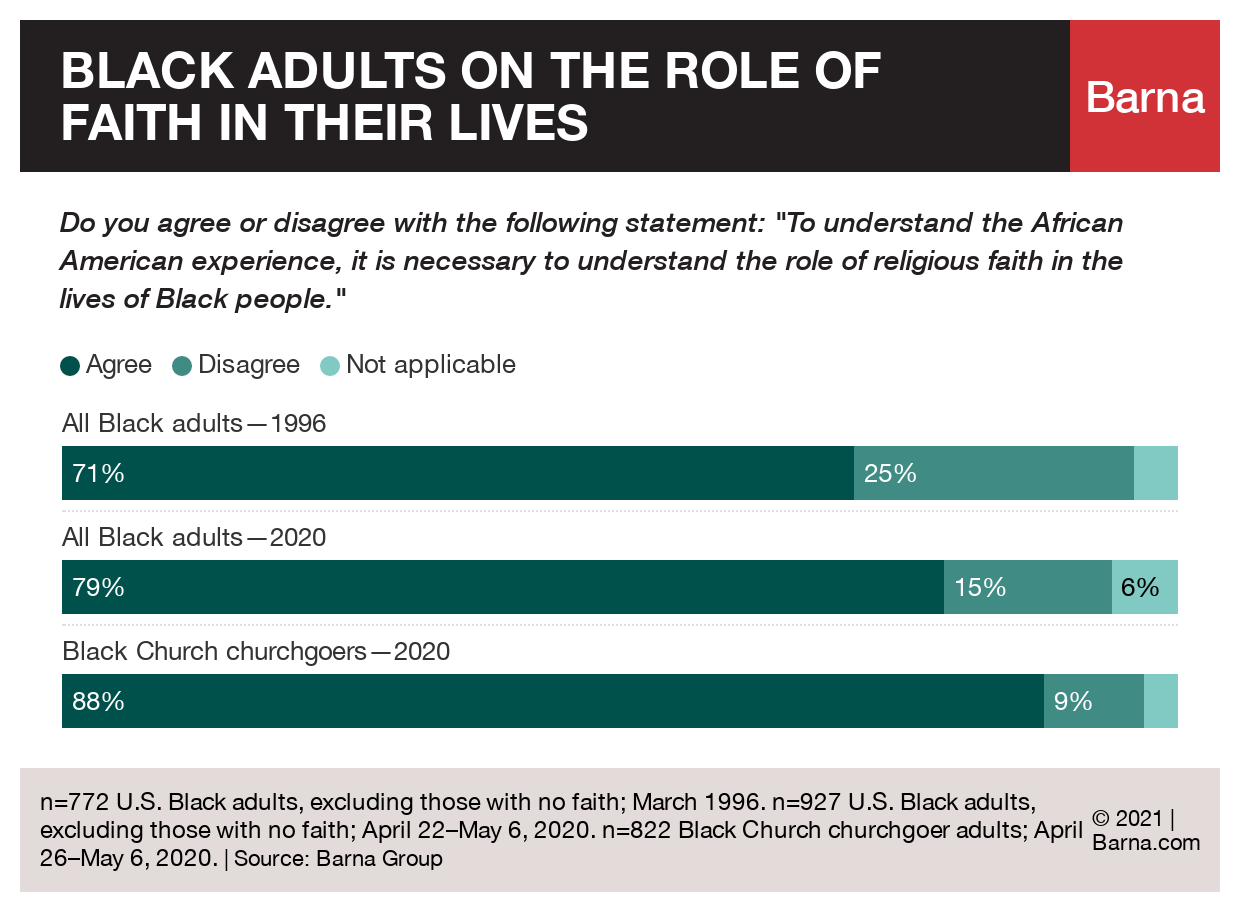 These are just a few findings revealed by Barna Group in its “State of the Black Church” project.

While acknowledging the absence of a monolithic “Black Church,” the polling firm defined “Black Church churchgoers” based on the self-identification of survey respondents as Black and whether they consider their congregation as primarily Black and labeled their pastor as Black.

The polling firm plans to release its full findings later this summer with a Trends in the Black Church report.