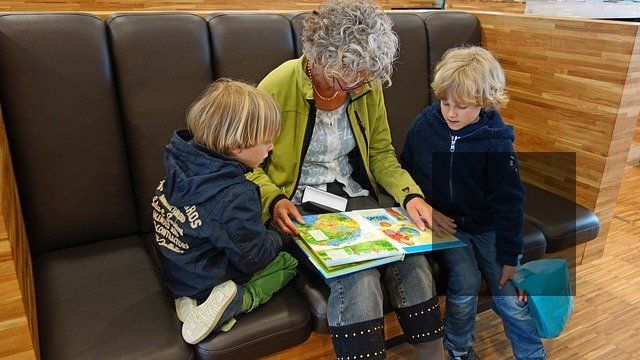 Seventh grader Jordan Banks loves nothing more than drawing cartoons about his life. But instead of sending him to the art school of his dreams, his parents enroll him in a prestigious private school known for its academics, where Jordan is one of the few kids of color in his entire grade.

As he makes the daily trip from his Washington Heights apartment to the upscale Riverdale Academy Day School, Jordan soon finds himself torn between two worlds—and not really fitting into either one. Can Jordan learn to navigate his new school culture while keeping his neighborhood friends and staying true to himself? Age 8+

Imani and Kayla are the best of friends who are learning to celebrate their different skin colors. As they look around them at the amazing colors in nature, they can see that their skin is another example of God’s creativity! This joyful story takes a new approach to discussing race: instead of being colorblind, we can choose to celebrate each color God gave us and be colorFULL instead. Age 4+

God’s very good idea is to have lots of different people enjoying loving him and loving each other. This stunningly illustrated journey from the garden of Eden to God’s heavenly throne room shows how despite our sinfulness, everyone can be a part of God’s very good idea through the saving work of Christ. This book will help children see how people from all ethnic and social backgrounds are valuable to God and how Jesus came to rescue all kinds of people. It will also excite them about being part of church. Age 4+

Something Happened in Our Town: A Child’s Story About Racial Injustice

Something Happened in Our Town follows two families — one White, one Black — as they discuss a police shooting of a Black man in their community. The story aims to answer children’s questions about such traumatic events, and to help children identify and counter racial injustice in their own lives. The book includes an extensive “Note to Parents and Caregivers” with guidelines for discussing race and racism with children, child-friendly definitions, and sample dialogues. Age 4+

Originally performed for ESPN’s The Undefeated, this poem is a love letter to black life in the United States. It highlights the unspeakable trauma of slavery, the faith and fire of the civil rights movement, and the grit, passion, and perseverance of some of the world’s greatest heroes. The text is also peppered with references to the words of Martin Luther King, Jr., Langston Hughes, Gwendolyn Brooks, and others, offering deeper insights into the accomplishments of the past, while bringing stark attention to the endurance and spirit of those surviving and thriving in the present. Robust back matter at the end provides valuable historical context and additional detail for those wishing to learn more. Age 6+

Hidden Figures: The True Story of Four Black Women and the Space Race

Dorothy Vaughan, Mary Jackson, Katherine Johnson, and Christine Darden were good at math…really good. They participated in some of NASA’s greatest successes, like providing the calculations for America’s first journeys into space. And they did so during a time when being black and a woman limited what they could do. But they worked hard. They persisted. And they used their genius minds to change the world. In this beautifully illustrated picture book edition, we explore the story of four female African American mathematicians at NASA, known as “colored computers,” and how they overcame gender and racial barriers to succeed in a highly challenging STEM-based career. Age 4+

Raised in South Carolina and New York, Woodson always felt halfway home in each place. In vivid poems, she shares what it was like to grow up as an African American in the 1960s and 1970s, living with the remnants of Jim Crow and her growing awareness of the Civil Rights movement. Touching and powerful, each poem is both accessible and emotionally charged, each line a glimpse into a child’s soul as she searches for her place in the world. Woodson’s eloquent poetry also reflects the joy of finding her voice through writing stories, despite the fact that she struggled with reading as a child. Her love of stories inspired her and stayed with her, creating the first sparks of the gifted writer she was to become. Aged 10+

An important book for all ages, Little Leaders educates and inspires as it relates true stories of forty trailblazing black women in American history. Illuminating text paired with irresistible illustrations bring to life both iconic and lesser-known female figures of Black history such as abolitionist Sojourner Truth, pilot Bessie Coleman, chemist Alice Ball, politician Shirley Chisholm, mathematician Katherine Johnson, poet Maya Angelou, and filmmaker Julie Dash. Among these biographies, readers will find heroes, role models, and everyday women who did extraordinary things – bold women whose actions and beliefs contributed to making the world better for generations of girls and women to come. Whether they were putting pen to paper, soaring through the air or speaking up for the rights of others, the women profiled in these pages were all taking a stand against a world that didn’t always accept them. Age 8+

Prairie Lotus is a powerful, touching, multilayered book about a girl determined to fit in and realize her dreams: getting an education, becoming a dressmaker in her father’s shop, and making at least one friend. Acclaimed, award-winning author Linda Sue Park has placed a young half-Asian girl, Hanna, in a small town in America’s heartland, in 1880. Hanna’s adjustment to her new surroundings, which primarily means negotiating the townspeople’s almost unanimous prejudice against Asians, is at the heart of the story. Narrated by Hanna, the novel has poignant moments yet sparkles with humor, introducing a captivating heroine whose wry, observant voice will resonate with readers. Afterword. Age 10+

Separate Is Never Equal: Sylvia Mendez and Her Familys Fight for Desegregation

Almost 10 years before Brown vs. Board of Education, Sylvia Mendez and her parents helped end school segregation in California. An American citizen of Mexican and Puerto Rican heritage who spoke and wrote perfect English, Mendez was denied enrollment to a “Whites only” school. Her parents took action by organizing the Hispanic community and filing a lawsuit in federal district court. Their success eventually brought an end to the era of segregated education in California. Age 6+

Henry’s Freedom Box: A True Story from the Underground Railroad

Henry Brown doesn’t know how old he is. Nobody keeps records of slaves’ birthdays. All the time he dreams about freedom, but that dream seems farther away than ever when he is torn from his family and put to work in a warehouse. Henry grows up and marries, but he is again devastated when his family is sold at the slave market. Then one day, as he lifts a crate at the warehouse, he knows exactly what he must do: He will mail himself to the North. After an arduous journey in the crate, Henry finally has a birthday — his first day of freedom. Age 4+

From the Creators of Hair Like Mine, Skin Like Mine is a fun, easy-to- read for beginners as well as advanced readers. An entertaining yet creative way to address and celebrate diversity among young children. Guaranteed to make you smile and a bit hungry. Age 1+