The 37-year-old, married with two children, died in a one-vehicle crash around 11:10 p.m. a mile west of Huntsville.

Brian D. Thomas II was driving a 2019 Volkswagen Jetta when it “left the roadway, struck a culvert and overturned,” according to AL.com. Thomas, who wasn’t wearing his seat belt, was pronounced dead at the scene.

“Last night our brother @briandthomas_ passed in a car accident. I don’t know what to say….My heart is broken,” Jeremy Anderson, Thomas’ friend and mentor, wrote on Instagram Monday. “I just spoke to you yesterday!! You were supposed to be staying at my house Wednesday with the fam and then off to Disney World for spring break. I could hear the joy and excitement in your voice.”

“You were such a good father and husband. You worked so hard to provide a good life for your family. I’m beyond proud of you bro,” Anderson added. The evangelist also vowed to make sure Thomas’s family “will never want for anything … as long as God will allow me I’ll finish the work that we started.”

Thomas was committed to keeping young people from making the kind of mistakes he made as a youth. Even after converting to Christianity, he still had to deal with the consequences of his past life. 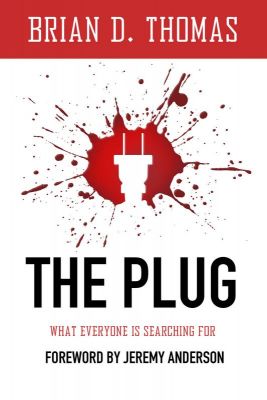 The motivational speaker shared his powerful testimony with Faithfully Magazine in 2013, revealing that he had repented of a life of crime and drugs to serve God. He documented his journey in his memoir, The Plug: What Everyone Is Searching For.

An excerpt from Faithfully Magazine’s profile on Brian Thomas is below:

After witnessing that Thomas was willing to sacrifice “to a point where he was willing to be a martyr for Jesus Christ,” Anderson determined that his friend’s conviction was “real” and “rare.”

“When he’s down for something, he’s all the way down,” Anderson said about Thomas’ loyalty. “Ain’t no fake stuff with him here.”

“Everybody has things in their life that they regret having done,” Thomas said. “That’s just human.”

When asked how he views the decisions that negatively impacted his life and the lives of others, Thomas said, “I think the peace comes in where you know that God’s grace has covered you and that everything that you’ve done was for a purpose. Everything that I’ve ever done is now being able to be used for somebody else.”

Those were mistakes, he added. “That’s just what I’ve done. That’s not who I am. So knowing that, I’m able to release those things and let it go.”

The Royal Funeral Home website states that a graveside service for Thomas will be held 11 a.m. Monday, April 5 at Oakwood Memorial Gardens in Huntsville. The Rev. Dr. Carlton P. Byrd, senior pastor of Oakwood University Church, will oversee the funeral, while and Elder Brian D. Thomas will eulogize his son.

Mourners were invited to send flowers or a card, or write their condolences on the funeral home’s website.