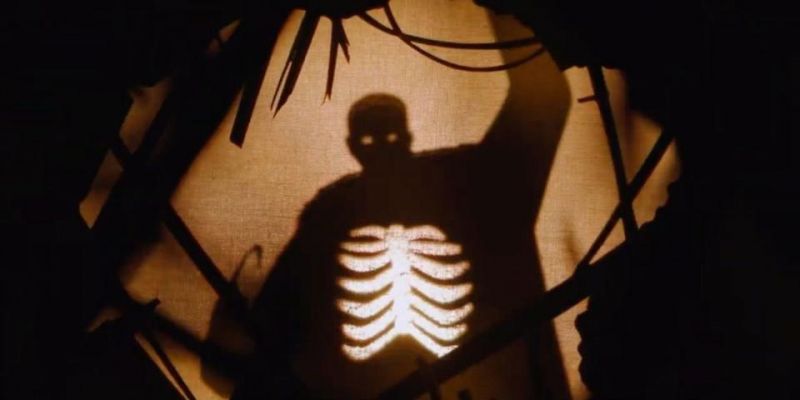 That question seems harmless enough when art gallery owner Clive (Brian King) poses it to painter Anthony McCoy (Yahya Abdul-Mateen II) early in the horror film “Candyman”. After all, Anthony has been caught in a creative rut. Despite living in comfortable circumstances, having recently moved into his girlfriend Brianna’s (Teyonah Parris) luxury Chicago high-rise apartment, Anthony feels like a failure, unable to express himself. A showing at Clive’s gallery might be just what he needs to move forward.

But the problem isn’t just one of inspiration. It’s also a matter of curation, as indicated by Clive’s questions, and when he dismisses Anthony’s ideas as “played out.” As a White person and the owner of the gallery, Clive gets to decide which art is displayed. He has the power to elevate Black artists like Anthony or to silence them.

A sequel to the 1992 movie of the same name, “Candyman” deals with many issues from the original film, including the titular vengeful, hook-handed spirit who can be conjured by saying his name five times in a mirror. But director Nia DaCosta, working from a script she wrote with Jordan Peele and Win Rosenfeld, also touches on subjects such as police brutality, gentrification, and mental illness, all in the backdrop of the art world. Through this setting, “Candyman” offers a powerful critique of the way white supremacy limits Black expression.

DaCosta goes further to suggest that the Candyman legend is a communal story, retold by Black people to make sense of the continuing reality of racist violence.

DaCosta’s version directly engages with the themes of mythmaking in the Clive Barker story “The Forbidden,” which introduced the Candyman as a spirit haunting an English council estate, and those of racial violence, which came when writer/director Bernard Rose moved the story to the Cabrini-Green housing project for his 1992 film.

But DaCosta goes further to suggest that the Candyman legend is a communal story, retold by Black people to make sense of the continuing reality of racist violence.

DaCosta relates this theme in the movie’s most notable visual flourish, the use of shadow puppets. Shadow puppets first appear early in the movie, when Brianna’s brother Troy (Nathan Stewart-Jarrett) tells a variation of the first “Candyman’s” plot. But they appear again throughout the film, always to describe a scene of White violence on Black people.

For all their brutality, the shadow puppet shows are the most artistically striking element in a film filled with stunning visuals. Working with her cinematographer John Guleserian, DaCosta sends her camera creeping behind her characters. She uses shot/reverse shot combinations to not just show us the artworks characters study but also capture the consternation and confusion on the observers’ faces. DaCosta renders kill scenes like ornate paintings, most notably with a long pullout shot that makes a victim’s death by Candyman’s hook an insignificant event in a tableau of apartment building windows.

As you might guess from that description, I loved “Candyman.” DaCosta’s assured direction made the movie a visual treat, and the acting from Abdul-Mateen II, Parris, and others was engaging. And, yes, I enjoyed the gory effects.

But I must be honest and admit that I also love “Candyman” for its political message. Mixing horror mythology with messages from the Black Lives Matter movement, “Candyman” turns “Say His Name” into a demand for justice, reimagining the central character as an avenging spirit, replacing the original film’s romantic specter (played by a magisterial Tony Todd).

But by admiring the political element, I am, on some level, enjoying art because of its relationship to Black suffering. And in that way, I’m not too far off from the movie’s Clive character. No, I don’t run an art gallery, but as a White critic, I do enjoy a level of privilege not extended to others. My race (and gender, class, and sexuality) gives me greater access denied to others, which disproportionately amplifies my voice.

I don’t think that this privilege means that I should limit my viewing to only works by White artists. But it does mean that I need to recognize the limitations of my understanding of the work. While I find much to appreciate in “Candyman,” none of it comes from lived experience. I don’t know what it’s like to have to reproduce widespread trauma to get attention from cultural gatekeepers, nor am I forced to put my work into the context of every other White writer. Police violence against Black people, as depicted in the film, is a moral and intellectual concern for me, to be sure. But it is not an existential threat.

As such, Black critics can offer far richer, more immediate interpretations of the film, whether they loved it or hated it.

Furthermore, I must be aware that my engagement with Black art comes mitigated by the twin forces of capitalism and white supremacy. The latter demands that art be commodified, while the former insists that it fit the presumptions of White audiences. As a result, the art from people of color that gets distributed by publishers, film studios, and galleries must reinforce the assumptions of the White people who control those means of distribution.

This fact is especially urgent for Christian viewers. We serve a creative God, and as people made in the image of God, we are all creative creatures. We are endowed by our Creator with a need to make art, to express ourselves, and reflect the glory of God with the diversity of life. While that certainly includes suffering, especially when the artist suffers, that’s not the entirety of any life. As Ecclesiastes 3 makes clear, human life involves joy and pain and everything in between, and it’s all subject for art.

By limiting Black art to focus on suffering, by demanding that artists who do not look like us conform to our expectations, White gatekeepers profane the image of God in those artists. We stifle their ability to live out the mandate of expression, of reflecting God’s beauty by engaging with the whole of creation.

“Candyman” is, in my estimation, a very good movie. But my estimation has limitations, especially when it comes to its representation of real-world racial violence. To respond in an honest, human, and Christian way, I must acknowledge the limits of my interpretation. That’s the only way the art of all people can flourish, in a manner that is as rich and varied as the God who created us.