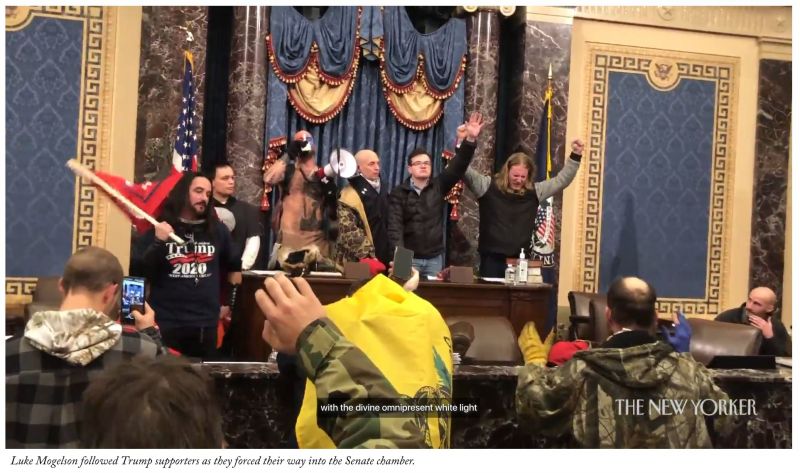 In video published by The New Yorker, mobs of Trump supporters are seen storming the Capitol building in defiance of police officers. As a reporter follows the mob into the building, some of them head for the Senate chamber. The video captures the riotous group bowing their heads and lifting their hands as the man dressed as a QAnon mascot (later arrested) leads them in prayer.

Many observers have noted what appears to have been an overwhelming Christian presence during the January 6 insurrection attempt and deadly riot at the Capitol.

In addition to praying during the siege, some rioters were seen erecting a wooden cross, waving a “Jesus is my savior / Trump is my president” flag, carrying a Christian flag, holding a Bible aloft, and identifying their religious affiliation in other ways. This reality has led some Christians to denounce what they see as Christian nationalism and reject rioters’ actions as symbolic of their religion.

Numerous rioters have openly said that they were at the Capitol at the “invitation” of President Trump.

Some evangelicals continue to stand by Trump despite purported evidence that he encouraged Capitol rioters.

The rowdy group captured by The New Yorker illegally occupying the Senate chamber begin their prayer at about eight minutes into video—right after a man at the Vice President’s seat yells, “Jesus Christ, we invoke your name, amen!”

Watch the entire video at The New Yorker: https://www.newyorker.com/news/video-dept/a-reporters-footage-from-inside-the-capitol-siege

So @NewYorker has footage of the prayer that was led on the Senate chamber floor by insurrectionists on Jan 6.

It was led by the so-called QAnon Shaman, and occurs roughly 2/3 into this video.