The Case for Christ: Common Questions About the Movie and Best-Selling Book

The Case for Christ: Common Questions About the Movie and Best-Selling Book 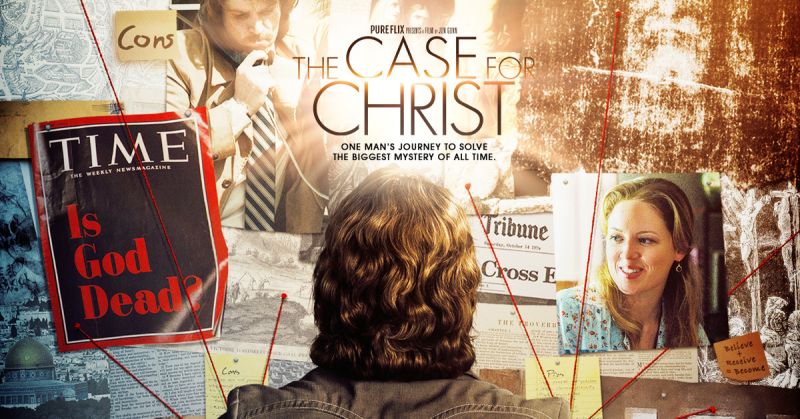 “The Case for Christ” movie was released in 2017 and dramatizes the conversion story of avowed atheist and journalist Lee Strobel. Strobel shares his journey to Christianity in the 1998 book that inspired the film.

This article attempts to answer common questions that come up about “The Case for Christ.”

How to Watch ‘The Case for Christ’

The Case for Christ movie is available for viewing on a variety of platforms, including via Netflix through their DVD rental program. The DVD rental subscription starts at $7.99/month for unlimited, one-at-a-time rentals. Amazon also has the DVD and Bluray available for purchase starting as low as $3.95.

If, however, you’re looking to watch the movie online right now, platforms where you can stream The Case for Christ include Prime Video and Pure Flix.

The fee for The Case for Christ stream is $4.20 and gives you 30 days to start watching the movie. You’ll have 48 hours to finish watching it once you’ve started. The movie has a solid 5-star rating based on more than 7,200 reviews on Amazon’s Prime Vide platform.

Benefits of watching in on Prime Video is the ability to watch it and chat about it with others via the Watch Party option. Once you’ve finished watching The Case for Christ, Amazon has a list of suggested movies (such as “Heaven Is for Real” and “God’s Not Dead”) that may be similar in theme and/or also feature some of the same actors. Watch it here.

This Christian movie streaming platform is also another good option for watching The Case for Christ. Additionally, Pure Flix Entertainment and Triple Horse Studios are the production companies behind The Case for Christ, while Pure Flix is credited as the main distributor.

Similar to other streaming services, you choose top ay a monthly or yearly fee to watch unlimited movies on multiple devices. As of this article, Pure Flix charges start at $6.95 a month and includes a free 7-day trial. This means you can check out what Pure Flix has to offer without paying a dime for a week. You just have to make sure to cancel if you’re unsatisfied before charges kick-in. If you choose the trial option to watch The Case for Christ, you might as well check out Pure Flix’s other “family friendly” offerings. Some of those titles include “The Bible” series, “The Chosen,” “An Interview With God,” and many others.

Benefits of picking Pure Flix is a guarantee that your movie options are “clean,” “faith focused,” and “family friendly.” Also, the service offers a free popular Christian movie guide for download. In addition, the service is exclusively home to a large selection of movies and series that you won’t find on other streaming services. Watch it here.

Other places where you can stream The Case for Christ include: YouTube, Google Play, Apple TV, and Vudu — all for $3.99.

Is The Case For Christ Based On a True Story

Yes, The Case for Christ is based on the true experiences of Lee Strobel, the protagonist in the film and the author of the book that it’s based on.

Strobel, a former investigative journalist and newspaper editor, wrote about his journey to belief in the 1998 book, The Case for Christ: A Journalist’s Personal Investigation of the Evidence for Jesus. The award-winning book, which has reportedly sold more than five million copies, is available in various formats on Amazon. There are also used paperback copies for less than $3. Strobel is also credited as a writer for the film.

What Is The Case for Christ About

The basic synopsis of the movie (via IMDB.com) is: “In 1980, atheist and [award-winning] investigative journalist Lee Strobel applies his journalistic and legal skills to attempt to disprove his wife Leslie’s newfound Christian faith, which creates a rift within his marriage. After completing a thorough investigation for almost two years he finds the historical evidence for Jesus, and then finds a new faith in Christ.”

What Is The Case for Christ Rated

The Case for Christ is rated PG by the Motion Picture Association’s Classification and Rating Administration. A PG rating indicates that parental guidance is suggested because some of the movie’s material may not be appropriate for children.

“The PG rating indicates, in the view of the Rating Board, that parents may consider some material unsuitable for their children, and parents should make that decision,” the MPA states. Since The Case for Christ is considered an explicitly Christian movie, it’s been deemed safe to watch for viewers who are at least 12 years old.

Is The Case For Christ A Good Movie

This is always a difficult question to answer, as movie tastes vary widely. However, if you consider reviews on common streaming platforms, many viewers seem to agree that yes, The Case for Christ is a good movie. Take a look at the reviews on the Prime Video page where you can stream it — it has a maximum five-star rating based on more than 7,200 reviews.

At the same, if you look at the Internet Movie Database, the Christian film has a rating of 6.3 stars out of 10 based on more than 8,200 ratings. And if you Google the movie, the search engine says that at least 90% of its users like it.

Of course, the best way to find out if the movie is any good is to actually watch it. Supposedly, the first 15 minutes of a movie can often give a strong indication of whether or not it will ultimately be a “good” movie. Another possible indication of the movie’s quality is the fact that it earned about $17.6 million at the box office, after exhausting a $3 million budget for production.

How Long Is The Case For Christ

The movie run time is about one hour and 54 minutes — a little longer than the average movie length of about 90 minutes (one hour and 30 minutes).

If you’re wondering about the book itself, the paperback is 336 pages. If you’re an “average reader,” it’s estimated that it would take you a little over nine hours to read 336 pages.

How Accurate Is Case For Christ Movie

There don’t appear to be complaints about the movie being “inaccurate,” so it’s safe to assume filmmakers got all of the most important information right. But, of course, the only way you’ll ever know for certain is if you read the book and watch the movie yourself.

If you want a fact-check on how the details of the movie line up with the facts and Strobel’s book, then this History vs. Hollywood article might help.

Where Was Case For Christ Filmed

The movie was filmed in Covington, Georgia, a popular filming location for movie and TV productions. Because of this, the city — and often the state —has been dubbed “Hollywood of the South.”

Nearly 300 film and TV projects listed on IMBD.com have been filmed in that city over the past few decades. Some projects filmed in Covington are “The Vampire Diaries” and “Doctor Sleep.” “The Underground Railroad” (Amazon), “My Cousin Vinny,” “Sweet Home Alabama,” are others.

“The town’s historic square, with its iconic courthouse featuring a clock tower, is instantly recognized by many viewers as the fictionalized version of Sparta in the TV series In the Heat of the Night. To another generation, Covington is Mystic Falls, the imaginary small-town setting for The Vampire Diaries,” MeLinda Schnyder writes.

We hope this article has answered all of your burning questions about The Case for Christ or at least has given you some useful resources. If you think we’ve missed any details or have inaccurate information about the movie and book, tell us in the Comments section or send us an email.

Happy viewing — or reading…or both!