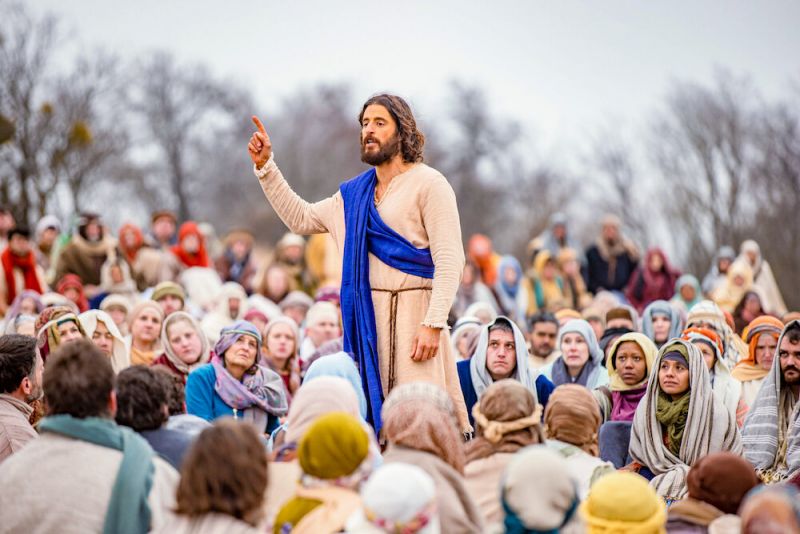 Jesus, played by Jonathan Roumie, delivers His Sermon on the Mount to a crowd of thousands in "The Chosen." (Photo: press.thechosen.tv)

Hot off the success of its second season, Jesus series “The Chosen” is inviting fans to be in the crowd of 5,000 Jesus miraculously feeds in the third season’s adaptation of the gospels.

Fans shouldn’t expect to spend time with “The Chosen’s” Jesus for free, however. To be part of the extras crowd will cost $999.99 or more.

“The Chosen” became the world’s largest crowdfunded media project when it raised $11 million for its first season. It’s the only multi-series show about the life of Jesus and is told from a faith-based perspective.

Producer Dallas Jenkins announced the call for extras via livestream with his Loaves and Fishes production company.

Jenkins elaborated that his production company Fishes and Loaves would follow up with those who donated at or above this amount and give them the option to bring other members of their family or friend group for an additional $100 per person. Also, at some point, Jenkins said they would have to cap the number of people who could qualify to come.

“There is a limit. If we made it possible for anyone to come to the feeding of the 5,000 we would probably have 20,000 people show up and we just can’t do that,” Jenkins said.

This “paying it forward” strategy has long been foundational to “The Chosen’s” success. The show is free to watch, but fans of the show donate to fund future episodes via the “pay it forward” section of “The Chosen” app. The show streams on VidAngel, a faith-based platform.

Jenkins said in March that to meet their goal to film all seven seasons and reach a billion people, they would need to raise $100 million. Because they always want “The Chosen” to be free for people to watch, they’ve created a free app for people to watch each episode, Jenkins said, but also an online store where people can buy shirts, hoodies, devotionals and even a novel version of “The Chosen” written by Jenkins’ own father Jerry Jenkins, co-writer of the original “Left Behind” books that launched a multimedia enterprise and shaped a generation of evangelicals. These purchases go to funding new episodes.

“The Chosen” has been in the news a lot over the past year. Last year, 2,000 extras came to “The Chosen’s” set to film scenes of Jesus delivering his Sermon on the Mount. The event attracted major media attention for the way the production company was permitted to film such a large crowd in the midst of the pandemic (which ReligionUnplugged covered here.)

While the show attracts fans across Christian denominations, it has received notable support from Latter Day Saints, previously called Mormons. “The Chosen” filmed its second season in Goshen, Utah, where the Church of Jesus Christ of Latter-day Saints built a replica Jerusalem to film “The Bible” (2011) and “The Book of Mormon” (2017).

This year, Jenkins and Jonathan Roumie (who plays Jesus in the series) also made headlines when they both met Pope Francis at the Vatican due to their work on the series. Roumie is Roman Catholic.

Editor’s note: This article was republished from Religion Unplugged under a Creative Commons license.

Joseph Holmes is an award-nominated filmmaker and culture critic living in New York City. He is co-host of the podcast The Overthinkers and its companion website theoverthinkersjournal.com where he discusses art, culture, faith and art with his fellow overthinkers.