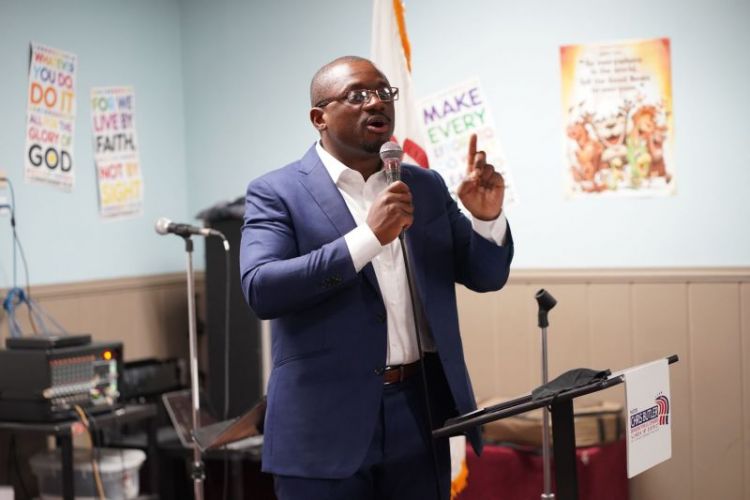 “I think it’s very appropriate for the church to always speak up for righteousness in society. And that’s really how I see what we’re doing here in this campaign.” – The Rev. Chris Butler

A longtime Chicago-based community organizer and ordained minister announced his run for Congress last year—and the campaign looks promising, even with more than a half-dozen other challengers now vying for the seat.

The Rev. Chris Butler, 37, has emphasized the need for community safety as well as life-affirming policies to “change the current abortion narrative,” according to his campaign website.

His candidacy may surprise some observers who know Butler only as senior pastor of Chicago Embassy Church on the city’s Southside. But the spiritual leader also serves as a board member of The And Campaign, a grassroots organization that encourages Christians to political activism. Butler and The And Campaign co-founder Justin Giboney host the nonprofit’s “Church Politics” podcast.

In an interview with Faithfully Magazine, Butler said he has long encouraged Christian involvement in politics, so running for office only makes sense.

“I am the heir of a rich tradition in the Black church, particularly of the pulpit [and] being a leader in civics, politics, and social issues,” he said. “What I’ve inherited in ministry has led me to do this work.”

Butler began his candidacy in April 2021, well before incumbent Congressman Bobby Rush (D) revealed in January that he will not seek reelection and several challengers entered the race. According to the last round of Federal Election Commission finance reports, Butler is ranked second in fundraising among candidates.

Illinois’ 1st Congressional District includes Chicago-area south suburbs and some rural industrial areas. It typically votes Democratic, the party with which Butler has long been affiliated—though with strong caveats.

He points to principles of The And Campaign, stated in their book he co-authored, Compassion & Conviction.

“There is a way to be faithful in Republican politics — and in Democratic politics,” Butler said. “It doesn’t mean that we’re going to all agree on tax rates and other functions of government, but we have to build out those conversations.”

In public appearances, he seems to walk that line. On January 8, Butler spoke at the March for Life rally in downtown Chicago alongside other regional pro-life leaders. The American Solidarity Party and Pro-Life Democrats of America subsequently endorsed him.

“Well-funded special interests from outside of our community have rolled back protections for pre-born lives in order to make Chicago the Midwest capital of abortion,” he said, referring later to Planned Parenthood and NARAL. “I am compelled by love to be here.”

Pastor Chris Butler of Chicago Embassy Church speaks at the March for Life in Federal Plaza, as the group prepares to march through the Chicago Loop pic.twitter.com/ztGHjt1TGA

He expanded on this stance in our interview, calling out “pro-abortion” political action committees (PACs) that provide significant funding to Democratic campaigns.

“These folks who have been involved in supporting exclusively pro-abortion activity, I would love to see them stand with pro-life advocates who believe in eliminating the crises mothers face without ending the pregnancy,” Butler said.

But he also spoke passionately of pressing community needs that are far afield from most pro-life conservatives.

Butler’s drive to uphold human dignity and labor alongside community members rising out of poverty finds its origin in his lifelong home: the Black church.

“We learn from the scriptures that the outworking of our faith in the broader society is very important,” he told FM. “All the way from the abolition of slavery through civil rights, those broad social movements were really anchored in the Black church. So many in the church hosted meetings, led marches — that was where the energy came from.”

With the Democratic Party primary set for June 28, Butler and his team are systematically working to knock on every residential door in the district and mobilize support. Debates are on the horizon; a campaign representative noted internal polling indicates they’re well-positioned in the field.

Locals are “ready for the kind of leadership we’re bringing forward,” said Butler. “We just got to learn to talk to each other again. I think this is an opportunity for folks on different sides of the aisle to start a conversation and begin to work together.”