Black Pastor Writes Letter to Whitest Denomination; Christians Compromise for Power; and Other New Books on Our Radar

Black Pastor Writes Letter to Whitest Denomination; Christians Compromise for Power; and Other New Books on Our Radar

If you’re at all familiar with Faithfully Magazine‘s “Bookshelf,” a collection of books that we’ve covered or have piqued our interest, you know that we’re all about highlighting resources that potentially impact how Christians understand their faith and its relation to race, culture, history, society, and more.

The following list of books include titles by authors (mostly Christian) writing on a variety of subjects. Their inclusion on this list does not constitute an endorsement, as this list is only for informational purposes.

Title: Dear Church: A Love Letter from a Black Preacher to the Whitest Denomination 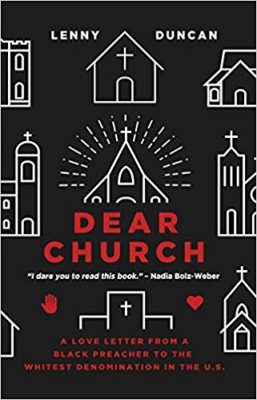 Description: Lenny Duncan is the unlikeliest of pastors. Formerly incarcerated, he is now a Black preacher in the Whitest denomination in the United States: the Evangelical Lutheran Church in America (ELCA). Shifting demographics and shrinking congregations make all the headlines, but Duncan sees something else at work–drawing a direct line between the church’s lack of diversity and the church’s lack of vitality. The problems the ELCA faces are theological, not sociological. But so are the answers.

Part manifesto, part confession, and all love letter, Dear Church offers a bold new vision for the future of Duncan’s denomination and the broader mainline Christian community of faith. Dear Church rejects the narrative of church decline and calls everyone–leaders and laity alike–to the front lines of the church’s renewal through racial equality and justice.

It is time for the church to rise up, dust itself off, and take on forces of this world that act against God: whiteness, misogyny, nationalism, homophobia, and economic injustice. Duncan gives a blueprint for the way forward and urges us to follow in the revolutionary path of Jesus. (More)

Title: Inseparable: How Family and Sacrifice Forged a Path to the NFL 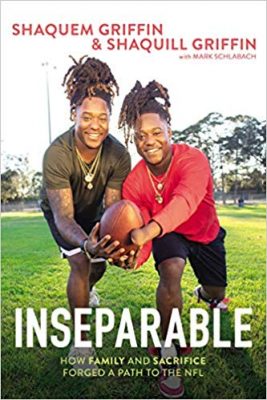 Description: Much more than a sports memoir, in Inseparable Shaquem and Shaquill Griffin share the previously untold details of the powerful and inspiring story behind the modern NFL’s first one-handed player, and his twin brother’s unrelenting devotion, sacrifice, and love. It’s the story of Shaquem’s understanding of God’s purpose for his life—to inspire others to stop being afraid and to stop making excuses—and his family’s unwavering support in spite of seemingly insurmountable obstacles. The Griffins’ unlikely underdog story has already captured the imagination of millions of football fans and physically challenged people around the world. (More)

Title: We Too: How the Church Can Respond Redemptively to the Sexual Abuse Crisis 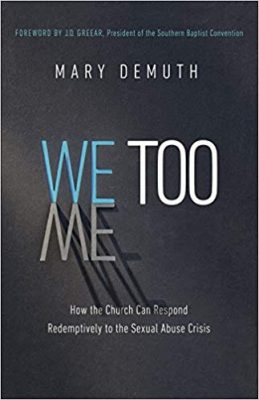 Description: We like to think the church is a haven for the hurting. But what happens when it’s not?

Author and advocate Mary DeMuth urges the church she loves to rise up and face the evil of sexual abuse and harassment with candor and empathy. Based on research and survivors’ stories, along with fierce fidelity to Scripture, DeMuth unpacks the church’s response to sexual violence and provides a healthy framework for the church to become a haven of healing instead of an institution of judgment.

In the throes of the #MeToo movement, our response as Christians is vital. God beckons us to be good Samaritans to those facing trauma and brokenness in the aftermath of abuse and provide safe spaces to heal. DeMuth advocates for a culture of honesty and listening and calls on the church to enter the places where people are hurting. In the circle of that kind of empathetic #WeToo community, the church must become what it’s meant to be—a place of justice and healing for everyone. (More) 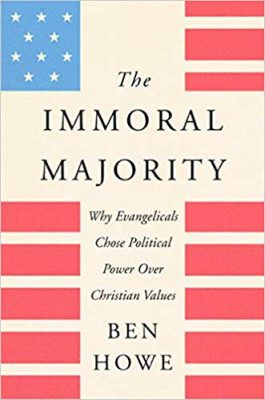 Description: In 2016, writer and filmmaker Ben Howe found himself disillusioned with the religious movement he’d always called home. In the pursuit of electoral victory, many American evangelicals embraced moral relativism and toxic partisanship.

Whatever happened to the Moral Majority, who headed to Washington in the ’80s to plant the flag of Christian values? Where were the Christian leaders that emerged from that movement and led the charge against Bill Clinton for his deception and unfaithfulness? Was all that a sham? Or have they just lost sight of why they wanted to win in the first place? From the 1980s scandals till today, evangelicals have often been caricatured as a congregation of judgmental and prudish rubes taken in by thundering pastors consumed with greed and lust for power. Did the critics have a point?

In The Immoral Majority, Howe—still a believer and still deeply conservative—analyzes and debunks the intellectual dishonesty and manipulative rhetoric which evangelical leaders use to convince Christians to toe the Republican Party line. He walks us through the history of the Christian Right, as well as the events of the last three decades which led to the current state of the conservative movement at large.

As long as evangelicals prioritize power over persuasion, Howe argues, their pews will be empty and their national influence will dwindle. If evangelicals hope to avoid cultural irrelevance going forward, it will mean valuing the eternal over the ephemeral, humility over ego, and resisting the seduction of political power, no matter the cost. The Immoral Majority demonstrates how the Religious Right is choosing the profits of this world at the cost of its soul—and why it’s not too late to change course. (More)

Title: Talking to Strangers: What We Should Know about the People We Don’t Know 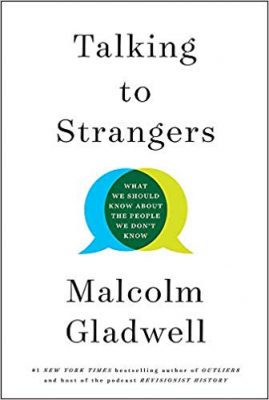 Description: How did Fidel Castro fool the CIA for a generation? Why did Neville Chamberlain think he could trust Adolf Hitler? Why are campus sexual assaults on the rise? Do television sitcoms teach us something about the way we relate to each other that isn’t true?

Talking to Strangers is a classically Gladwellian intellectual adventure, a challenging and controversial excursion through history, psychology, and scandals taken straight from the news. He revisits the deceptions of Bernie Madoff, the trial of Amanda Knox, the suicide of Sylvia Plath, the Jerry Sandusky pedophilia scandal at Penn State University, and the death of Sandra Bland—throwing our understanding of these and other stories into doubt. Something is very wrong, Gladwell argues, with the tools and strategies we use to make sense of people we don’t know. And because we don’t know how to talk to strangers, we are inviting conflict and misunderstanding in ways that have a profound effect on our lives and our world. In his first book since his #1 bestseller, David and Goliath, Malcolm Gladwell has written a gripping guidebook for troubled times. (More)

Title: More Than Pretty: Doing the Soul Work that Uncovers Your True Beauty 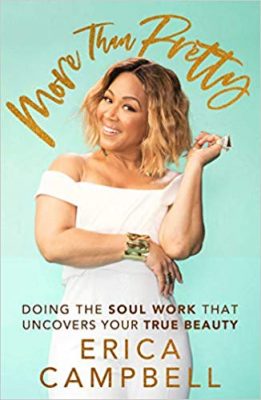 Description: So many young women struggle with issues of low self-esteem, depression, self-degradation, and other unhealthy habits that manifest on the outside what’s happening on the inside. And the rise of social media and the emphasis on beauty as validation for self-worth have only added fuel to the fire. But Erica Campbell—Grammy-winning gospel star, reality TV star, and nationally-syndicated radio host—believes that we need to redefine beauty. We need to start to see ourselves the way God sees us—beautiful and perfectly made. True beauty, Erica believes, is about embracing who God made you to be.

In More Than Pretty, she turns the mirror around, reflecting God’s Word, His affirmations, and His design for every woman. This book explores issues of self-esteem, identity, and God’s design for love and intimacy. She is candid about her own struggles, sharing honestly about her battle to feel “good enough” in an industry that fixates on outward appearances.

Covering topics such as being honest about who we truly are, reflecting on what we have internalized about our appearances, uncovering and exposing the plan of the Enemy, and accepting God’s will for your life, Erica offers thoughtful, hard-won wisdom and encouragement to women from all walks of life, helping build confidence in and through the power of God. (More) 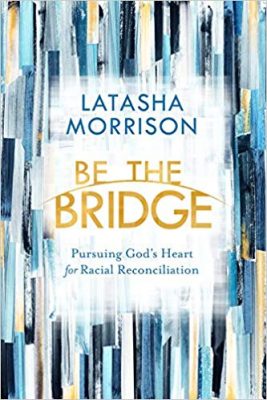 Title: Be the Bridge: Pursuing God’s Heart for Racial Reconciliation

Description: With racial tensions as high within the church as outside the church, it is time for Christians to become the leaders in the conversation on racial reconciliation. This power-packed guide helps readers deepen their understanding of historical factors and present realities, equipping them to participate in the ongoing dialogue and to serve as catalysts for righteousness, justice, healing, transformation, and reconciliation. (More)

Title: Unsettling Truths: The Ongoing, Dehumanizing Legacy of the Doctrine of Discovery 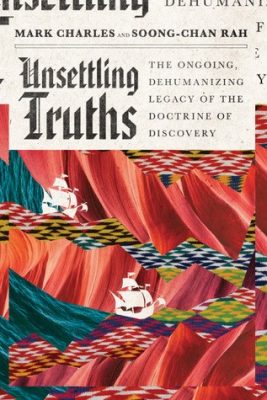 Description: You cannot discover lands already inhabited. Injustice has plagued American society for centuries. And we cannot move toward being a more just nation without understanding the root causes that have shaped our culture and institutions. In this prophetic blend of history, theology, and cultural commentary, Mark Charles and Soong-Chan Rah reveal the far-reaching, damaging effects of the “Doctrine of Discovery.” In the fifteenth century, official church edicts gave Christian explorers the right to claim territories they “discovered.” This was institutionalized as an implicit national framework that justifies American triumphalism, white supremacy, and ongoing injustices. The result is that the dominant culture idealizes a history of discovery, opportunity, expansion, and equality, while minority communities have been traumatized by colonization, slavery, segregation, and dehumanization. Healing begins when deeply entrenched beliefs are unsettled. Charles and Rah aim to recover a common memory and shared understanding of where we have been and where we are going. As other nations have instituted truth and reconciliation commissions, so do the authors call our nation and churches to a truth-telling that will expose past injustices and open the door to conciliation and true community. (More)

Editor’s note: By clicking on links to Amazon, Faithfully Magazine may receive a commission on purchases you make on their site. Affiliate partnerships are just one way we cover operating expenses for the publication. If you don’t have a subscription, sign up here.