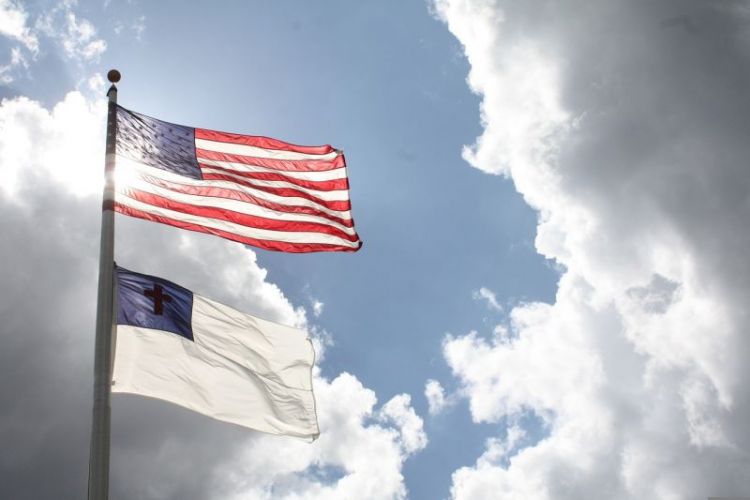 A flag of the United States flies above a Christian flag. (Photo: SEspider/Pixabay)

Speaking with FM in February 2021, the history professor and bestselling author said:

“If we just take the concept, for example, of Christian Nationalism, which was a kind of a unifying value for conservative White Evangelicals in the post-war era — coming out of World War Two and then in particularly in the crucible of the Cold War — this idea that America was created as a Christian nation, you know, at its origins, and that it was kind of uniquely blessed by God. But then things started to go wrong at a certain point and exactly where that, you know, things started to go wrong is open for, I guess, consideration, but often it’s the 1960s. It’s like the agreed upon…like, that’s when things are going great, until the 1960s. And we’re trying to recover Christian America, the values that once made this country great, and we need to recover those in order to make America great again. Okay. That’s the narrative kind of the kind of Christian Nationalism.

“And then Christians, and if the Evangelicals as the most faithful Christians, have a really critical role to play, both in keeping American Christianity pure and in keeping America strong. Okay, that’s kind of the motif of the book (Jesus and John Wayne: How White Evangelicals Corrupted a Faith and Fractured a Nation). Now, it’s worth noting again, this is presented in racially neutral language. It’s just ‘Christian America,’ it’s ‘Christianity,’ It’s ‘keeping America strong.’

“But this whole narrative only makes sense if you’re a White Christian. Right? If you think about like things were really great until the 1960s. And that’s when [unintelligible] very that makes no sense if you are anybody who’s not white if you are a Black American, a Black Christian. So, oftentimes within White Evangelicalism, the racial subtext is invisible to White Evangelicalism themselves, and yet it is so fundamental to their values. And one of the things I tried to do in Jesus and John Wayne is just make that more visible.”