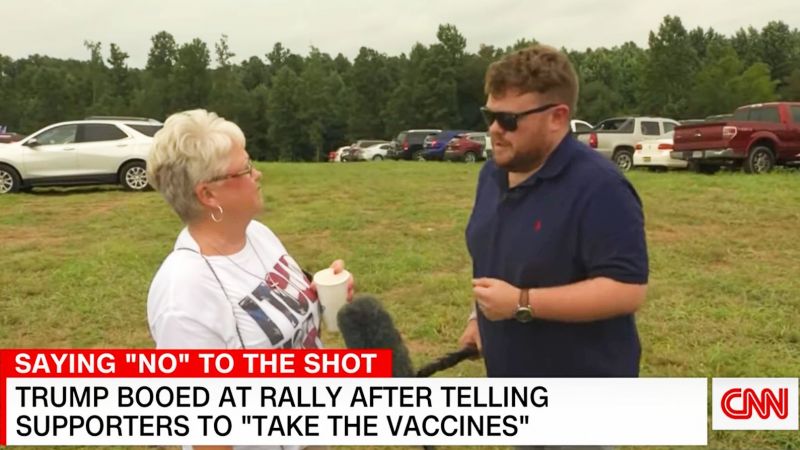 A Christian woman interviewed by CNN at a Trump rally in Alabama says she would rather be a goat than a sheep when it comes to taking a vaccine that could protect her from the deadly coronavirus.

Vickey Sims, identified as a Trump supporter, told reporter Donie O’Sullivan on camera that she was not getting “that vaccine.”

Sims went on to say that she does not trust the government or the Centers for Disease Control and Prevention (CDC). Instead, she trusts debunked information offered by discredited Dr. Sherri J. Tenpenny. Tenpenny infamously told Ohio lawmakers in June that the vaccines can leave people magnetized.

When Sims’s own doctor tried to persuade her to get vaccinated, she said she referred him to Tenpenny.

Although former President Donald Trump publicly stated that he has been vaccinated, Sims said she doesn’t believe it.

Trump initially downplayed the severity of the coronavirus even as he himself became infected while in office. His conservative and Republican base booed him when the former president sheepishly encouraged them to get vaccinated during the August 22 rally in Cullman, Alabama.

Sims, seen wearing a cross around her neck during the CNN interview, said she is listening to God instead of the news. However, she did state that her preferred sources of information include “prophets of God, and Newsmax, and maybe a little Fox.”

But, in general, Sims revealed, she’s more interested in listening to what God is saying and “what He’s fixing to do.”

Jesus, who calls himself the Good Shepherd, illustrates in that passage how he will return to earth to judge “the nations” at a future time. In the New Testament passage, Jesus says he will separate the righteous from the unrighteous — as a shepherd separates the sheep from the goats, respectively.

Sims, who chuckled before speaking, insisted, “I am a goat, cause I ain’t a sheep. I’m not doing what they tell me to do. I’m fighting against it.”

According to The Guardian’s report on Trump’s Alabama rally, Cullman is “a city struggling to cope with COVID-19 cases and hospitalizations.”

“In Alabama, the state hospital association said this week that 85% of hospitalized Covid-19 patients were unvaccinated,” the report stated. “Alabama is also seeing a surge in Covid cases among children. The state this week had 50 children hospitalized with Covid-19.”