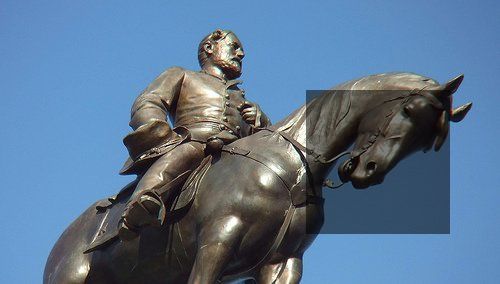 I used cotton to decorate my home when we lived in Mississippi. In the South, cotton stems are trendy home décor. In my opinion, it’s also a very beautiful plant. But Black girlfriends voiced to me that “beautiful” is the last descriptive word they think of when they see cotton stems.

Seeing the plant evokes images of a period in our nation’s history when their ancestors were enslaved to pick cotton, described as “the greatest material interest of the world” in Mississippi’s Declaration of Succession that defended the institution of slavery.

For the sake of my friends, and due to personal convictions, I have since replaced the cotton with dried lavender.

Does every Black person perceive cotton décor this way? Of course not, but those nearest and dearest to me did. Their perspective opened my eyes to a larger reality that objects communicate a message. Depending on perception, the message is not going to be the same for everyone.

I think there is something to learn from this dialogue about cotton stems as it pertains to the bigger question of Confederate monuments and their removal from the public square.

Christians and non-Christians alike have argued that removing Confederate monuments “erases history.” Writers more qualified than me have written extensively on why their removal from the public square and placement in museums does not erase history, so it is not my aim to write here what others have already written well.

Other Christians give this apologetic for Confederate monuments: “Their removal will not change hearts.”

I agree. Heart-change is an incredible act of God. However, my fear is that this is a scapegoat-response from evangelicals to the question of whether Christians should defend Confederate monuments from a theological perspective. Again, there is a good solely historical argument for the removal of Confederate monuments in the public square.

“Heart-change is an incredible act of God. However, my fear is that this is a scapegoat-response from evangelicals to the question of whether Christians should defend Confederate monuments from a theological perspective.”

There is another response that most concerns me: “These monuments have not offended anyone until now.”

I am afraid the underlying implication here is this: “These monuments have not offended me.”

This is evident in Trump’s tweets following Charlottesville’s “Unite the Right” rally:

“Sad to see the history and culture of our great country being ripped apart with the removal of our beautiful monuments. You can’t change history, but you can learn from it. Robert E Lee, Stonewall Jackson – who’s next, Washington, Jefferson? So foolish! Also the beauty that is being taken out of our cities, towns and parks will be greatly missed and never able to be comparably replaced!”

The president sees these “beautiful monuments” as representatives of America’s “history and culture” that “will be greatly missed and never able to be comparably replaced.”

Similar to my perception of cotton, his statements are a measurement of value based on aesthetics. However, many citizens (including Christian brothers and sisters) in this country do not view the statues as “beautiful” and believe there are better ways to give a fuller picture of our collective history and culture in the public square.

A better question we can ask as Christians is one of ethics. The public square is a place of honor. There is a difference in remembering versus memorializing someone. Were these Confederate leaders made in the image of God and should we remember them? Yes and yes. Was their cause ethical and, therefore, honorable? No.

“There is a difference in remembering versus memorializing someone.”

In an excellent article on this topic called “Charlottesville, Confederate Memorials, and Southern Culture,” John Piper quoted a plaque from a monument dedicated to an unknown soldier in his hometown of Greenville, South Carolina. The statement on the plaque concludes: “[T]he soldiers / Who wore the gray and died / With Lee, were right.”

Piper wrote this about the monuments: “[T]he inclination to remove a Confederate memorial is intensified… by the fact that racist beliefs in the present–and the injustices that flow from them–are fortified by the memorials in question. In other words, the memorials may, at the same time, celebrate past wrongs, and support present wrongs.”

Therefore, the question of whether Christians should defend Confederate monuments is a judgment, not only of aesthetical value but also of ethical value.

Most plaques on these monuments do not recognize and lament this grievous history in America. Instead, they commemorate the soldiers’ “Lost Cause” to defend the institution of slavery.

This cause was not an ethical one. Not only do these monuments in the public square minimize the Bible’s truth that all people are made in God’s image, but they also celebrate an immoral cause.

I want Christian brothers and sisters of color to feel welcome in our home, and I want our home to communicate to them that I hear their concerns. When I learned that cotton stems did not do so, it seemed best to trade them out for some dried lavender. How much more should we want the public square to communicate the same, as well as accurately represent history?

Furthermore, when White Christians (myself included) begin to obey God’s command to bear the burdens of our brothers and sisters of color, we might find ourselves surprised that we are offended on their behalf by anything that sets itself up against the truth of what God says about His people.