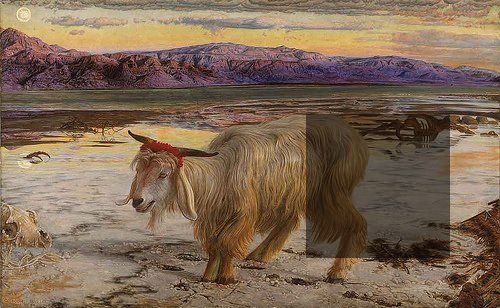 A painting of a scapegoat carrying guilt upon its head.

Scapegoats and the Church

The 20th century French philosopher René Girard suggested a fascinating theory: societies survive off scapegoats. Girard’s point was quite simple—human societies naturally are violent enterprises that, if left unchecked, ultimately spiral down into upheaval and destruction. The only way to temper these violent inclinations is to place blame or violence upon a scapegoat—either an individual or a representative group of people—in order that the pressure valve of bloodlust is released. As time goes on, a society requires new scapegoats in order to keep its violence in check.

Girard’s theory has a direct connection to the way the church often deals with egregious sin and evil.

When reports of sexual abuse and a proliferation of rape culture is cited in the news, the church can easily brush it off as an “out there” rather than an “in here” problem. The unbelieving world “out there” is often the church’s scapegoat, as it were. The world receives the blame for wickedness so that the society of the church lives on in strength. It’s not much different from the Pharisee in Jesus’ parable who said, “I thank you, God, that I am not a sinner like everyone else. For I don’t cheat, I don’t sin, and I don’t commit adultery. I’m certainly not like that tax collector!” (Luke 18:11 NLT).

Caring Well: A Survivor’s Reflections on the ERLC Conference on Abuse

As the hashtag #MeToo became viral across social media, and as horrific stories came to light around the world of men and women who have been sexually abused and harassed, the church as a whole has spent more time talking about the sin “out there,” as though redirecting the gaze of the watching world away from within its own walls. Hollywood, secularization, the world “out there” became the talking points of the church as she cast stones upon easy targets—scapegoats—to take the violence of blame. As Kevin Spacey, Harvey Weinstein, Mark Halperin, Garrison Keillor, Matt Lauer and more have come under serious accusations of sexual abuse and harassment, the church has more or less framed this as righteous judgment against a wicked world and vindication of the church as a bastion of morality and uprightness.

That is, until #ChurchToo came around.

Twitter users Emily Joy and Hannah Paasch are credited with starting the viral hashtag, and many voices—both Christian and non-Christian—have been using it to share stories of sexual abuse that were often covered up in the church. Perhaps that is the most glaring of differences between #MeToo and #ChurchToo. In many of the #ChurchToo confessions, victims disclosed facts about how their abusers were protected and vindicated while their own reputations were tarnished.

Married pastor confessed “feelings” for a female staff member. She didn’t reciprocate. Church leadership ran her off and lied about what happened. He remains pastor. #churchtoo

I was raped when I was 9 by a member of my church. The pastor, and my parents, told me I needed to forgive him, as that is what Jesus would do. They made me hug my rapist and tell him I forgave him.#churchtoo

In too many instances to count, the reputation of the institution was upheld at the expense of a victim. The survival of many churches, their leaders and their reputations have only been possible because of the pouring out of blame and violence upon scapegoats. Girard’s scapegoat theory is alive and well within the church.

The Christian Response to #ChurchToo

Christians have two options when it comes to the #ChurchToo hashtag. They can take the easy path and simply look away, assuming that these are merely extreme examples or flagrant expansions of the truth on the outskirts of the church, which the church as a whole is immune to. Or, they can take a look at what the Bible says:

For the time has come for judgment, and it must begin with God’s household. (1 Peter 4:17a NLT)

Simply put, God is “cleaning house,” and His house is His church. We can try to sweep the dirt under the rug, but God will find us out. We can try to direct God’s gaze at the mess of our neighbor’s house “out there,” but His eyes won’t be turned. We can do our best to wrongly place blame, but He knows who is in the wrong. If He has come to sweep up our house first, then we ought to think seriously and soberly about #ChurchToo and the fact that the voices resonating in that hashtag are simply a small number of a multitude of other victims that may even be in our own churches. What are we doing to protect the vulnerable and abused from those in power who have influence at their fingertips? Will we rightfully weep and mourn over #ChurchToo since it breaks God’s heart too? Will we as the church look at ourselves clearly in the mirror today and realize that we are more monster than magnificent than we dare realize?

But perhaps the greatest reason why we can bravely look into a mirror and own up to our sins as individuals and as the church is because we have a Scapegoat who took all the blame and all of the violence as an innocent victim in our place. We have no need to appoint new scapegoats to survive as the church, whether that is Hollywood, the world around us or even the victims of sexual abuse. We have a Scapegoat who received limitless violence upon his bowed down head so that our heads would be lifted up in the hope of justice for ourselves and for the most vulnerable among us.

We are no better than the world around us, and that should be our daily anthem. We don’t need to muster up a righteousness within, but we need to be found in the righteous Scapegoat slain, victimized and brutalized for us for the end of violence and the terminus of blame He calls us to be an ear to those speaking out with quivering voice and arms to bind up the bruised and scarred. He bids us to open our eyes, not simply at the #ChurchToo on Twitter, but the silent, hidden #ChurchToo going on in our pews. Jesus is most pleased when a tapestry of justice adorns the walls of his house.

Faithfully Magazine stands in support of victims of abuse. If you are currently a victim of abuse, we encourage you to contact the police immediately.

Caring Well: A Survivor’s Reflections on the ERLC Conference on Abuse