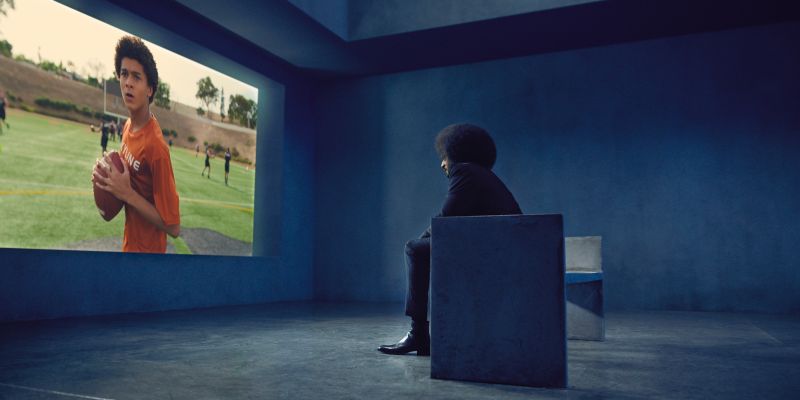 “Colin in Black and White,” streaming on Netflix beginning October 29, presents both a dramatized telling of key moments during the teen years of former NFL quarterback and activist Colin Kaepernick and a rallying cry for Black Americans to embrace themselves and their power.

The limited series was created by Ava DuVernay and Kaepernick and unfolds over six, 30-minute episodes. The lead cast includes standout Jaden Michael as a teen Kaepernick and an underwhelming Mary-Louise Parker and Nick Offerman as his adoptive White parents.

In addition to highlighting the usual aspects of teen life — school drama, romantic crushes, and the desire to fit in — “Colin in Black and White” painfully dramatizes some of the racist encounters Kaepernick experienced as a biracial Black teen pursuing his goal of becoming a professional quarterback in overwhelmingly White contexts. The series is centered not only on the former NFL star’s narration of his athletic pursuits and complex family life, but is interspersed with compelling reenactments of historical and illustrative moments reflecting Black life in general. Ultimately, the series encourages Black viewers to defy White society’s imposed limitations, self-serving lies, and racist narratives.

“Colin in Black and White” balances storytelling and narration very well, and its creative aspects (including the soundtrack) and directional variety (DuVernay, Sheldon Candis, Robert Townsend, Angel Kristi Williams, and Kenny Leon) are among its strengths. However, some of its dramatized moments are a bit over-the-top — such as when a White cop aggressively pulls teen Kaepernick over and asks his aloof parents, passengers in the vehicle, if they are all right. Or when a White man graciously holds an elevator open for his parents, but scowls when he sees Kaepernick run in behind them — and the teen’s father chastises the him for challenging the man’s racism. These scenes might compel viewers to question if writers settled for stereotype or aimed for authenticity. Kaepernick’s parents are shown as well-meaning, yet also appear willfully ignorant and even racist themselves on occasion.

Viewers expecting to see references to Kaepernick’s religious faith or his teen-self’s interactions with his older White siblings will be disappointed. But viewers hoping to learn some of the motivations behind Kaepernick’s on- and off-the-field activism, will be pleased. Overall, “Colin in Black and White” is informative, entertaining, and inspiring. And like the actor who portrays him on screen, Kaepernick seems at home in front of the camera and shines as he speaks to viewers and leads them through the series.