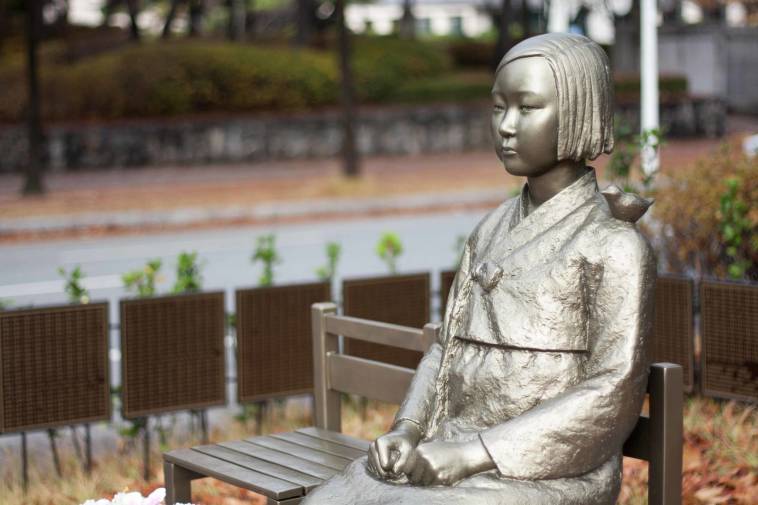 Statue of a Korean comfort woman.
ShareTweetPin It

Finding common ground among the diverse range of cultures across the world can be extremely challenging. However, a shared narrative of oppression and protest can incite unity and empathy across vastly different groups of people. Seen above is a picture of a bronze statue of a young Korean comfort woman, installed by activists in more than 50 public spaces to raise awareness about Imperial Japan’s sexual slavery program before and during World War II. The iconic photograph seen below depicts Civil Rights activist Rosa Parks, who refused to give up her seat and resisted bus segregation. These two seemingly odd comparisons symbolize peaceful yet powerful protests, defiance, and calls for change.

“Comfort women” refers to the 200,000 girls and women—mostly from Korea but also from China, Taiwan, the Philippines, and other countries—who were forcibly taken from their countries to work as sex slaves in Imperial Japan’s military brothels during World War II. Many were tortured, forced to undergo abortions, and murdered. Each woman was forced to have sex with as many as 70 men per day in tents or wooden shacks surrounded by barbed wire. Video evidence of a mass grave of these sex slaves was released in February 2018 and gained international coverage, but was sparsely mentioned in Japan. Most recently, in 2020, the National Archive released video footage of comfort women being rescued from the frontlines on the Myanmar-China border. This video footage showed many women, including Madam Park Young-shim, whom the South Korean media used to refer to as the “full-term pregnant comfort woman.”

During the Transatlantic slave trade, 12.5 million African slaves—26 percent of whom were children—were forcibly shipped to the New World. By 1860, 50 percent of these slaves in the New World were in the United States. Black bodies were traded and sold as commodities. The purpose of their existence was decided by their White owners to be fruitful—both in the amount of cotton they picked and the number of new slaves to whom Black mothers gave birth.

Bodies as Tools for Maximum Benefit

Both sex slavery for Imperial Japan and enslavement of Africans were the result of systematic exploitation and intentional perpetuation of racial, ethnic, and gender injustice. Imperial Japan and White American slaveowners enslaved innocent citizens from other countries for free sex and free labor, for efficiency and productivity, and for their own benefit and profit.

Imperial Japanese military and government officials permitted the trafficking of women and encouraged management of these brothels to maintain the “durability or perishability of the women procured,” so they could use these women as long and as much as possible. They utilized the mass rape of young women to achieve the maximum efficiency of their military in efforts to win their wars.

Similarly, as the cotton industry became more profitable, White slaveowners forced their slaves to pick cotton faster and more efficiently to maximize profit. They were separated from family members, beaten, raped, lynched, and robbed of their dignity for the sole benefit of White slave owners. The labor of African slaves in plantations, farms, factories, and railroad tracks became the cornerstone of American capitalism.

In the 1990s, as a reaction to the survivors of the Japanese military brothels who began sharing their horrific stories, Japanese officials and historians tirelessly attempted to rewrite their own history. Their own telling of Japan’s war crimes cast the Japanese military and people, rather than the comfort women, as the victims. Their tactics, ranging from leaving this shameful part of their history in the textbooks intentionally vague and minimal to discrediting stories published in The Asahi Shimbun 20 years ago as erroneous, baseless, and slanderous were intended to “restore Japan’s honor with regard to the comfort women issue.” Prime Minister Shinzo Abe has publicly discredited historical records and denied facts that Japan systemically trafficked and coerced women into prostitution. Through this effort, the topic of comfort women was reframed as voluntary prostitutes.

Sadly, such injustice and whitewashing of history are not completely foreign to American history. When Frederick Douglass shared his experiences as a slave, White Americans refuted his claims by saying that slaves were treated well. Slaveholders claimed they loved and cared for their slaves. And slaves who resisted slavery were “ungrateful” backstabbers, threatening their benevolent owners. The WPA Slave Narratives was one of the largest collections of slave narratives undertaken by the federal government in the 1930s. This project—initiated by a White government, collected by mostly White interviewers, and told from White men’s perspectives—also reframed the stories and atrocities of African slavery through racist perspectives.

Both the Japanese and White American racists have and continue to justify their appalling acts. A Japanese mayor once said the Japanese military’s use of comfort women was “necessary to maintain discipline” and to provide rest for soldiers who were fighting hard. Likewise, White American historians by the early twentieth century justified exclusions and disfranchisement by framing their own history of slavery as “just and necessary.” But even the claim of necessity falls short and creates more problems: under what circumstances is slavery and rape ever necessary and justifiable?

With only 17 out of 239 Korean comfort women who publicly testified about their experiences currently alive as of May 26, 2020, the remaining comfort women now in their 80s and 90s still have not successfully had their historical accounts placed in Japanese textbooks or received a sincere apology and restitution from the Japanese government. Consequently, every Wednesday, they drag their old, torn bodies to the Japanese Embassy for peaceful protests so history would not repeat itself.

For African Americans, racism is still a current and painful reality. Mass slavery now exists in the form of mass incarceration and it continues to dehumanize, silence, and tie Black Americans back into the chains of oppression. African-American adults are five times more likely to be imprisoned than White Americans. While Black women overall are twice as likely to be imprisoned as their White counterparts, Black women aged 18-19 are more than three times more likely to be imprisoned than their White counterparts. These disparities are related to socioeconomic factors such as poverty, unemployment, segregation, and police neglect that are rooted in systematic race-based discriminatory policies.

Empathy as a Radical Act

The unrepentant enslaver, racist, and perpetrator will try to deny and reframe history to maintain their privileged status while their continued position of power falsely asserts that they have everything they want and need. But they continue to lack in something much more valuable than money and power: empathy.

Our ability to empathize with others in different places and times where the oppressor cannot is, in one sense, a gift. Similarly, James Baldwin put it this way:

“You think your pain and your heartbreak are unprecedented in the history of the world, but then you read. It was books that taught me that the things that tormented me most were the very things that connected me with all the people who were alive, who had ever been alive.”

However different our struggles, we can still empathize and stand together, building a connection that our oppressors could never have and allowing us to see our shared history and our shared future together.

Editor’s note: This article was originally published in Korean in The Korea Daily Atlanta and has been translated and republished with permission.

Rachel J. Lee works at the Antiracist Research and Policy Center in Washington, DC. She received a Master of Arts in Intercultural and International Communication from American University. 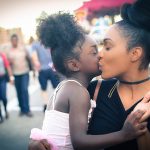