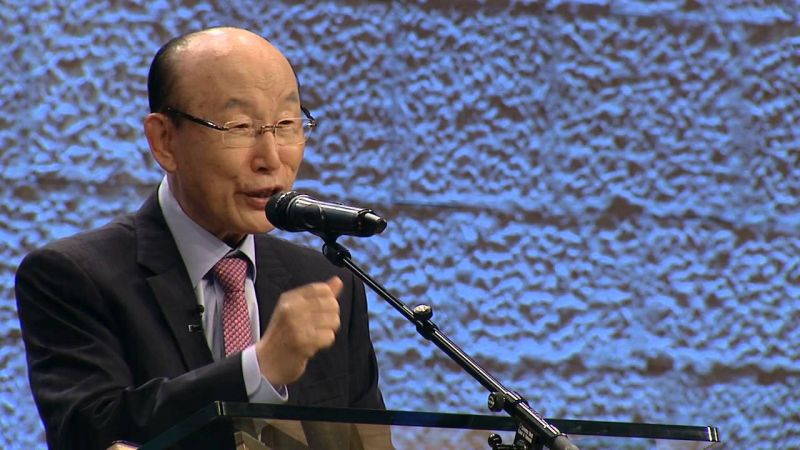 (RNS) — The founder of one of the world’s largest megachurches has died, according to news reports from Korea.

The English-language Korean Herald reported that the Rev. Cho Yong-gi died at a Seoul hospital on Tuesday morning (Sept. 14).

Cho, known in the United States as David Yonggi Cho, was the founder of the ——, a Pentecostal megachurch whose members number in the hundreds of thousands. The church’s website also carried an announcement of his death.

“He conveyed the gospel of hope to the Korean people who fell into despair after the Korean War,” the church said in a statement. “He was instrumental in growing the Korean church, particularly developing Yoido Full Gospel Church as the world’s largest church.”

Cho founded the Pentecostal church in 1958, initially holding services under a tent before moving to a 10,000-seat sanctuary in 1993, according to Christianity Today magazine. The church would eventually claim the title of the world’s largest church according to Guinness World Records, with close to 800,000 members.

As many as 200,000 people attended weekly services, drawn by Cho’s hopeful preaching and optimistic messages about a better life.

Though membership has since declined to 600,000, it’s still the largest Protestant church in South Korea, with 400 pastors and evangelists in the country and 500 missionaries abroad, reported The Associated Press. Protestantism is the biggest religion in South Korea, followed by Buddhism and Catholicism, according to 2015 government census data.

Born into a Buddhist family, Cho converted to Christianity, which he credited for his healing from a serious illness as a teenager, the Yonhap News Agency reported.

“Religion is useless if religion can’t give hope,” Cho told the radio program The World in 2017. “People began to swarm to the tent church, the poor people, they needed to have hope.”

The congregation was known for dividing church members into small groups, also known as cell groups, which met in homes under the direction of lay elders, according to Christianity Today.

Cho retired as pastor of the Yodoi church in 2007. In 2014, he was convicted for embezzling millions from the church and received a suspended sentence. His son Cho Hee-Jun used church funds to buy stocks at inflated prices and then created false documents to evade taxes, according to Korean news reports.

Still, Cho remained a beloved figure and was named pastor emeritus by the church, which is affiliated with the Assemblies of God. A number of Cho’s sermons are posted on the church’s website.

The English-language version of the church website also includes a greeting from Cho.

“All I did was offer my life just like the boy who gave the five loaves and two fish,” the website greeting states. “I simply held on to the dreams that the Lord gave me, and it was He who grew Yoido Full Gospel Church to 750,000 members to become the World’s largest church. This is entirely a grace given to us by God.”

Cho, who is survived by three sons, had been in poor health since suffering a brain hemorrhage in 2020, according to the Yonhap News Agency.

A funeral for Cho will be held at the church on Saturday, the Korean Herald reported.

The Associated Press contributed to this report.

Study: US Youth Sharply Divided on Perceptions of Diversity and Discrimination