Divisive Like Jesus: Calling Out Racism and Interpreting the Times

Divisive Like Jesus: Calling Out Racism and Interpreting the Times

The Gospels Give Birth to Poetry (‘God Speaks Through Wombs’ Excerpt)

Jesus was a troublemaker. Maybe that’s one of the reasons I love him so much. Jesus was tough and very vocal. Remember that time he called a bunch of religious people snakes (Matthew 12:34)? What about the time he told people who mistreated children to tie a rock around their necks and jump into the sea (Matthew 18:6)? How about the time he flipped some tables over and swung his whip around like a boss (John 2:15)?

Not only was Jesus tough, Jesus himself claimed to be divisive: “Do you think that I have come to bring peace to the earth? No, I tell you, but rather division (Luke 12:51 NRSV)!”

Apparently, Jesus didn’t get the memo about divisiveness. The Jesus in this Lukan passage is far from the flower-picking pacifist that we have characterized him as. No, in this passage Jesus says that he came to bring the fire and to force people to actually pick a side. This Jesus wasn’t nice and he wasn’t neutral. This Jesus said what was necessary, and then turned to the crowd (the Church) and called us hypocrites because we have failed to do one of the most important tasks of the church: interpretation.

On June 14, I received a very nasty, racist email. Warning: The screenshot that I am about to share contains graphic language. It is a real email sent from a real person and rather than cover it up, I want to expose it for what it is and issue a challenge to the Church. 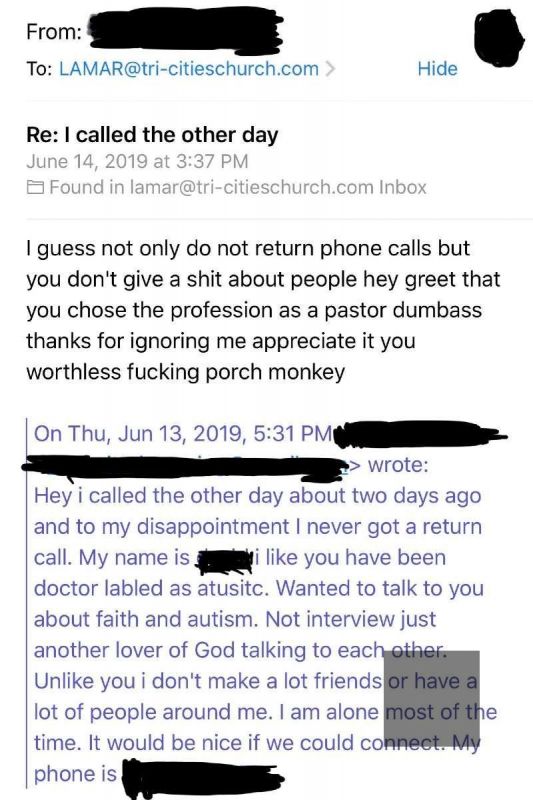 OK, so now that you’ve read it, let me say something about being “divisive.”

After a law enforcement friend did some research, we learned that this man was approximately 55 years old. Fifty-five is the same number of years since segregation was outlawed.

That’s not all that long ago. My parents would have been around the same age as my oldest son when segregation ended. That means that they would have lived around a quarter of their lives legally interpreted as less valuable than Whites.

Their parents, my grandparents, would have lived at least three-quarters of their lives legally interpreted as less valuable than Whites. My grandparents aren’t some historical figures. I knew them. I sat on their laps. I talked to them. I spent summers living with them. They taught me, trained me, and molded and shaped my life while living the majority of theirs being legally told that they did not have the right to interpret their own value.

What happened in that nasty racist email wasn’t just a bunch of words. It was an assessment of value. Besides the fact that he called me “worthless,” this man who was born at the end of an era where Black people where legally considered inferior, carried the legacy of this supremacist attitude into his interaction with a Black man in 2019.

“The people who lived this way and loved it are still alive. Their children and grandchildren to whom they passed this heretical ideology are alive and are responsible for leading businesses, governments, schools, and churches and yet we continue to believe that racism isn’t really a problem.”

This is the original sin of our country and this sin still exists and is active today. He was born at the close of an era that made his entitlement legal. His grandparents, and parents spent their entire lives living with laws that promoted and protected their perceived right to interpret the value of the lives of Black people. The people who lived this way and loved it are still alive. Their children and grandchildren to whom they passed this heretical ideology are alive and are responsible for leading businesses, governments, schools, and churches and yet we continue to believe that racism isn’t really a problem. The reason he approached me at all was because he viewed me, my time, my experience, my education, and my profession as an asset that he could use to his own advantage. When I did not deliver on his expectation of my usability, I became another non-compliant person of color.

What I experienced isn’t a special case. It’s common. It’s not the first time it’s happened to me. To all of my dear friends who mean so well, this is my life and the life of so many other people of color. Civil rights wasn’t just about fighting to put laws in place to protect people of color. It isn’t just about criminalizing saying or doing mean things to Black people.

Not everything or everyone is racist, but a lot of things that we have been ignoring are rooted in racism. It may not take the form of blatant language like the email I received, but we must have the courage to interpret the things people do and say for what they really are. The problem is, we have relinquished the role and responsibility of interpretation to those who have sinful intentions. Their primary tool for discouraging us from speaking out and taking a stand is weaponizing the term “divisive.” Yet, Jesus was divisive.

Racism has always been about Black people being told who they are, where they can go, what they can do, what they should believe, how much they can earn, who they can marry, what schools they can attend, what place they can live, and what access they can have to anything for any reason.

Racism is a sin. It is satanic at its core. But it is also very much a system that is designed to give the power of interpretation to a select group of people so they can interpret our value and demand at anytime how, where, and when we matter.

To the Christian Church, I offer the same challenge that Jesus offers — let’s learn how to interpret the times.

Editor’s note: A version of this essay was originally published by Lamar Hardwick on his blog, autismpastor.com.

Dr. Lamar Hardwick is a father, husband, pastor, and best-selling author. In 2014, after years of silently struggling with social anxiety and sensory processing issues, Dr. Hardwick was diagnosed with Autism Spectrum Disorder. His work is focused on faith, race, and disability advocacy in local church. Lamar is the lead pastor or Tri-Cities Church in Atlanta, Gerogia. You can follow his work at www.autismpastor.com.

The Gospels Give Birth to Poetry (‘God Speaks Through Wombs’ Excerpt)