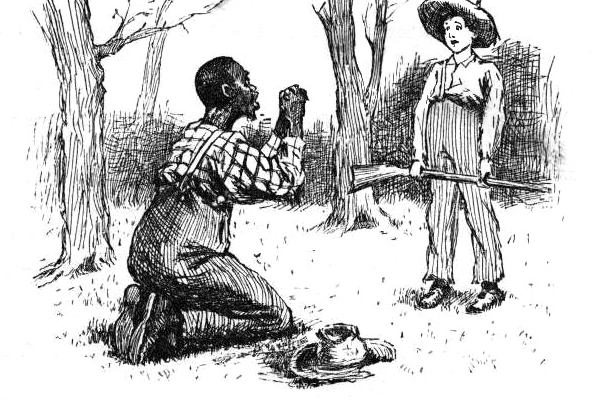 An illustration of Jim and Huckleberry Finn from the original 1884 edition of the book. (Photo: Edward Winsor Kemble, Public domain, via Wikimedia Commons)

On May 2, the New York Times published an opinion essay, “How the N-Word Became Unsayable,” by John McWhorter, an associate professor of linguistics at Columbia University. In the essay, adapted from his new book Nine Nasty Words: English in the Gutter, McWhorter, who is African American, traced the history of the “N-word” and used it freely in the text. He argues that the “N-word” evolved from being a more or less “neutral descriptor” in the 16th century to being a nasty pejorative in the 20th century and a taboo phrase at the start of the 21st century. In an accompanying essay, two New York Times editors explained why the newspaper decided to publish the essay and include the offending slur. In their essay they write “N-word,” not the slur itself.

As a high school teacher and a university-based teacher educator and historian, and as a White man often teaching in classrooms where students were predominately African American, I have always taken a careful approach to the examination of racist language and racist imagery when teaching about America’s racist and nativist past. Sometimes I edited out language while alerting students to the edits. Other times I discussed the issue with students and let the class decide if they wanted to examine the original text or an edited alternative. We did not read racist language aloud. My thought with both the text and images was that I wanted students to understand the depth and power of racism in American society. This was never about “cancel culture.”

I want high school and college students to understand that there is a lot of implicit and explicit racism in important American documents starting in the colonial era. The Colonial Laws of New York encoded enslavement in 1702 when the General Assembly dictated “no Person or Persons hereafter throughout this Province, do presume to Trade with any slave either in buying or selling, without leave and Consent of the Master or Mistress” and in 1711 the Common Council of the City of New York established a place for the sale and rent of enslaved Africans at the Wall Street Slip. Starting in 1742, the New York City Common Council approved a series of regulations to severely restrict the freedom of movement of enslaved Africans in the city.

The Declaration of Independence, which was primarily written by Thomas Jefferson, accused the King of Great Britain of exciting “domestic insurrections amongst us” in response to the 1775 proclamation by Lord Dunmore, the Royal Governor of the Virginia colony, declaring that “all indentured Servants, Negroes, or others, (appertaining to Rebels) free, that are able and willing to bear Arms.” The Virginia Assembly responded, “that all negro or other slaves, conspiring to rebel or make insurrection, shall suffer death.” While the Declaration famously declared that “all men are created equal,” in Notes on the State of Virginia (1785), Jefferson, who spent the majority of his adult life in a sexual relationship with an enslaved African woman, argued that whites had “superior beauty,” smelled better, and could reason more effectively than Black people.

The Constitution of the United States never explicitly mentioned slavery prior to passage of the 13th Amendment in 1865, but recognized and endorsed enslavement in a number of clauses. Article I, Sec. II, Paragraph III based taxation and representation on “the whole Number of free Persons” plus  “three-fifths of all other Persons.” Article I, Section IX, Clause I declares that Congress will not prohibit prior to 1808 “Importation of such Persons as any of the States now existing shall think proper to admit.” Article IV, Sec. II, Clause III demands the return of any person “held to Service or Labour in one State, under the Laws thereof, escaping into another.” In his 1841 argument before the Supreme Court in the Amistad case, former President John Quincy Adams referred to the explicit omission of slavery in the Constitution as “the fig-leaves under which the parts of the body politic are decently concealed.”

In lessons on the oppression of African Americans and other groups, I try to counter the sense of victimization with a focus on resistance. We look at slave rebellions, runaways and Underground Railroad conductors, vigilance committees, speeches by Henry Highland Garnet and Sojourner Truth, and the writings of Frederick Douglass, William Wells Brown, and Solomon Northup. In Narrative of the Life of Frederick Douglass, an American Slave (1845), Douglass includes the word “nigger” or “niggers” eleven times when quoting slaveholders and racist whites. The word appears twenty-five times in the expanded 1892 iteration of Douglass’ biography including in the lyrics to a song sung by enslaved Africans. William Wells Brown and Solomon Northup use the word in a similar fashion in their narratives.

As a high school teacher I established that certain language was not permissible in class, especially language that insulted or diminished other people, either as individuals or as members of a group. When we arrived at the woman’s rights movement of the 1840s and 1850s I introduced a “problem.” Sojourner Truth, an African American woman, an abolitionist, a woman’s rights advocate, and a former slave, in one of the most important speeches of the 19th century, referred to herself using a word, we had established could not be used in class. I had students decide whether to read an original version of the speech where she spoke in dialect, a version where the offending word was removed, or an edited version translated into Standard English. The reality is that when teachers say or write “N-word,” students know exactly what it symbolizes without any further explanation.

Voices of a People’s History of the United States (2004), edited by Howard Zinn and Anthony Arnove, has an edited version of “Ain’t I a Woman” (1851) without an explanation of of why it was edited (128-129). In their text, Zinn and Arnove substituted “negroes” for the “N-word,” which introduces a different problem. Many students today think that Negro is another “N-word” and assume it was used as an insult in the past. In classes we have discussed that African Americans in different historical periods used different terms to describe themselves, and the choices were usually related to civil rights movements. W.E.B. DuBois referred to people of African ancestry in the United States as “colored.” Martin Luther King, Jr. considered himself Negro. Black was the term of choice with the late 1960s Black Pride and Black Power movements. More recently Afro-American or African American have been the preferred nomenclature.

In some textbooks, selective quotes are used to avoid introducing the “N-word” as it appears in the text, but I think this whitewashes American racism. In Uncle Tom’s Cabin, Harriet Beecher Stowe used the “N-word” 109 times as she portrayed the horrors of slavery. Bailey and Kennedy in The American Spirit, v. 1 (428-429) include a selection where Simon Legree, the plantation owner, beats Tom for refusing to whip Cassie, another enslaved African. In this excerpt, Legree, refers to Tom as a “black beast,” “cussed cattle,” and a “dog.” Bailey and Kennedy leave out the previous passage where one of the other enslaved Africans uses the “N-word” to describe Tom, which I think is a mistake. Mark Twain’s The Adventures of Huckleberry Finn (1884) has been a particularly troubling text to teach because Twain embeds the “N-word’ in the name of Jim, a principal character. But Twain did this to highlight Jim’s human decency compared to white characters that mistreated Huck. In 2011, a publisher released a version of Huckleberry Finn with the offending word expunged to make it more suitable for the classroom. I believe students need to read and discuss the original, and Twain’s decision to use the “N-word,” but I would not have them read the offending word aloud. They can just read Jim.

Racist images pose a different problem for teachers, because when analyzing the images, you can’t avoid seeing the racism, but also because the stereotypes emphasized in the images can reinforce existing student biases about particular groups. I always begin with a “trigger warning,” not so much because students will be offended, but because they should find the images offensive. Some stereotypes seem to have lost their bite over time, like Thomas Nast portraying Irish immigrants to the United States as ape-like, but other images–Nazi propaganda depictions of Jews, U.S. anti-Japanese propaganda during World War II, and racist portrayals of Africans and African Americans including former President Barack Obama–are still painful.

Republicans have been quick to defend racist images and artists and attack those who question their use in classrooms. When Dr. Seuss was recently posthumously exposed for racist depictions of Asians and Africans he created early in his career, Florida Senator Marco Rubio tweeted “When history looks back at this time it will be held up as an example of a depraved sociopolitical purge driven by hysteria and lunacy” and Texas Senator Ted Cruz tweeted a photo that showed books by Dr. Seuss at the top of a best-seller list. A Republican Congressman introduced the Grinch Act to “safeguard” the access of American’s children to “historic stories and characters.” House Minority Leader Kevin McCarthy posted a video of himself reading Seuss’s Green Eggs and Ham.

Dr. Seuss, Ted Geisel, never officially apologized for racist depictions, but some commentators argue that his book, Horton Hears a Who! (1954), which teaches that support for the oppressed is a moral imperative, represents a rejection of earlier racist and anti-Japanese material. The book was written after Dr. Seuss visited Japan and witnessed the destruction caused by the atomic bombing of Hiroshima.

I think Dr. Seuss’ realization is an important lesson. If teachers ignore the destruction caused by words, images, and actions, by removing them from the curriculum, students won’t understand how horrific they are, the pain that they cause, and their impact on world events. While the “N-word” should remain as it was written in texts, or at most be replaced with “N-word,” I don’t think teachers should say the “N-Word” aloud in class, no matter who they are or who the students are in the room in front of them. That is a taboo that needs to stand.

Editor’s note: This article was republished from History News Network under a Creative Commons license.

Alan Singer is a historian and professor in the Hofstra University Department of Teaching, Learning and Technology. He is the author of New York’s Grand Emancipation Jubilee: Essays on Slavery, Resistance, Abolition, Teaching, and Historical Memory (SUNY Press, 2018).  Follow Alan Singer on Twitter.