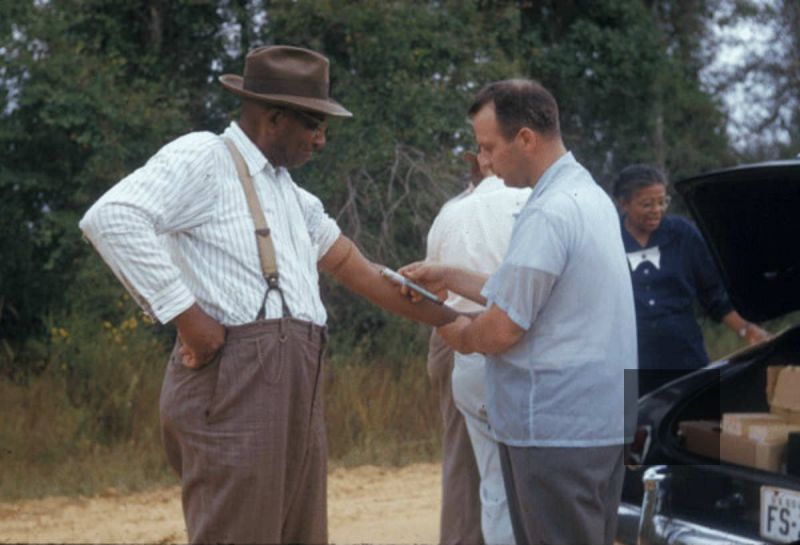 Photograph of participants in the Tuskegee Experiment, which began in 1932 and ended with national exposure in 1972. (Photo: National Archives Catalog)

The Tuskegee experiment, officially known as the Tuskegee Study of Untreated Syphilis in the Negro Male, was a deadly and demonic ruse launched in the name of science by White medical professionals targeting hundreds of Black men for four decades.

On May 16, 1997, President Bill Clinton issued a formal apology for the Tuskegee Syphilis Study, a notorious research project involving hundreds of poor African-American men that took place from 1932 to 1972 in Macon County, Alabama.

The men in the study had syphilis, a sexually transmitted infection, but didn’t know it. Instead they were told they had “bad blood” and given placebos, even after the disease became treatable with penicillin in the 1940s.

Five of the study’s eight surviving participants were present when Clinton made his 1997 apology on behalf of the American people during a ceremony at the White House.

The report details that doctors from the United States Public Health Service lied to 600 African-American men about their status with syphilis to get them to participate in the study. The men, mostly poor sharecroppers, were told by these doctors funded with government money that they would receive free health treatment for their “bad blood, a term commonly used in the area at the time to refer to a variety of ailments,” according to History.

Even after a cure for syphilis emerged, those in charge of the study kept it going–without treating the infected men. Local African-American doctors recruited to assist in the study agreed to not treat the men as well.

When the game with human life was finally exposed by a reporter in 1972, the study was shut down. By that time, however, some of the men had experienced miserable deaths due to syphilis or other related complications. Some of their wives and children had also been exposed to the STD.

The survivors of the Tuskegee experiment and the offspring of those who had died were compensated with $10 million in an out-of-court settlement in 1973. Some of the men’s former spouses, widows and children were provided free lifetime medical care, according to the Centers for Disease Control and Prevention.

“As a result of the Tuskegee Study, many African Americans developed a lingering, deep mistrust of public health officials,” History reports.

Editor’s note: No biographic information on the people pictured were provided by the National Archives. However, the full list of the men included in the study can be found here: Tuskegee Patient Medical Files