The Legacy of Harold Camping, Who Predicted the World’s End in 2011, Lives On

The Legacy of Harold Camping, Who Predicted the World’s End in 2011, Lives On 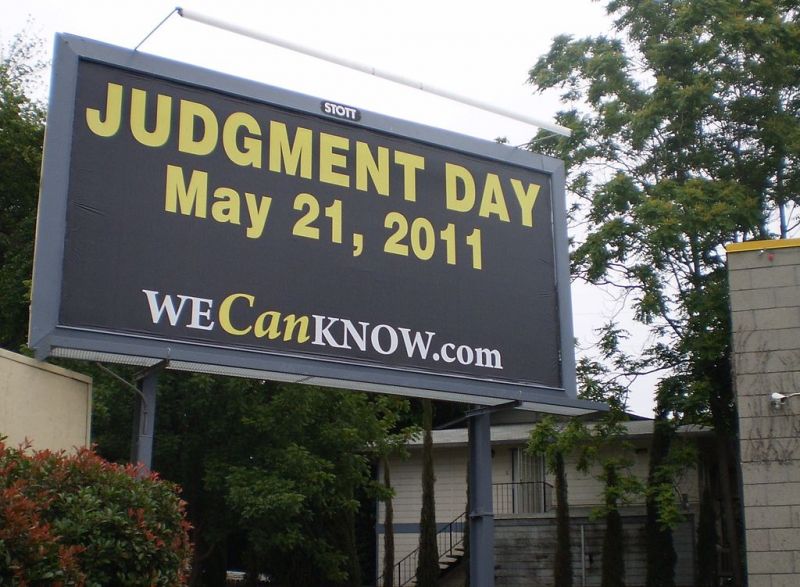 Harold Camping, a radio preacher from California, became known for predicting the end of the world in 2011.

“May 21st, there’s going to be a terrific earthquake,” he warned. “Way bigger than anything the earth has ever experienced, and that’ll be the beginning of Judgment Day.”

The then 90-year-old preacher was so convinced of his message that he invested nearly $100 million into an advertising campaign to spread the news. While his predictions were denounced and declared heretical by millions of other believers, and Camping died in 2013 at age 92, his legacy as a prophet has not entirely dissipated today.

Camping’s radio career began in 1958, when Camping partnered with several other believers to purchase an FM radio station in San Francisco, Calif. The station initially focused on broadcasting Gospel music to the local Christian community. In the decades after, the station would eventually expand out and broadcast the Christian Gospel to millions through more than 200 stations under the name Family Radio.

But Camping was more than just a radio expert. He often used “Open Forum” to answer questions about Christianity and preached a strict adherence to traditional values and an inerrant and fundamentalist understanding of Scripture. He warned that most churches are “departing from the rules of the Bible and developing their own rules.” Camping was teaching straight from the Bible and that made him more reliable than many churches, his devoted listeners believed.

The radio station operator also developed a reputation for promoting numerology, studying numerical patterns in the Bible. Camping believed that the numbers in Scripture offered a hidden code that, if read correctly, would provide the exact date of the End Times. Camping was so convinced of this that he eventually sold several FR radio stations and used the funding for his worldwide marketing campaign to promote his predictions that May 21, 2011 would be the end. It gained national attention, with hundreds of followers traveling the country in trucks and purchasing ads.

But then May 11 came and went, and nothing happened. Camping later updated his theories, stating that Oct. 21, 2011 would be the backup date for said predictions. That day passed as well. Things were seeming hopeless. It would take Camping until March 2012 to realize that maybe he had been wrong about the timing. He eventually admitted, “We humbly acknowledge we were wrong about the timing.”

While many people present Family Radio as an accomplice to Camping’s apocalyptic predictions, the relationships are far more complicated.

“Camping’s teachings drew an extraordinarily diverse group of people,” said Charles Sarno, a professor of sociology at Holy Names University. Sarno spent over a year attending one of Camping’s fellowships, interviewing several of his followers after May 21. “In terms of racial, class, and ethnic backgrounds, it was very international.”

One group that Sarno notes as standing out in popularity is engineers. Camping himself came from an engineering background and shared a common interest in a mathematical approach to Scripture.

For many of Camping’s followers, May 21 and Oct. 21 were important days where the world was going to change. But Sarno also found that many had a cognitive dissonance about the matter.

“There was this one guy who worked in Silicon Valley and designed computer chips,” Sarno recalled. “I asked him what is he gonna do on October 21st. He said, ‘I gotta go to work, I have a time-sensitive deadline to meet.’”

Not everyone was so lucky. Several followers of Camping claim that they lost hundreds of thousands of dollars due to Camping’s campaign.

After Camping departed from Family Radio in 2011, the network attempted to move on past Camping’s legacy.

“Most people who worked at Family Radio did not subscribe to Camping’s beliefs,” Sarno told Religion Unplugged.

In an interview with Chris Arnzen, Family Radio CEO Tom Evans said, “Camping isolated himself, he isolated Family Radio, he was not open to hearing any ideas or suggestions outside of his own.”

This isolation, mixed with Camping’s majority control of the radio network, made it hard for employees inside the company to challenge Camping without risking their own employment.

After Camping passed away in 2013, Family Radio began to amend relationships with other religious broadcasters. Evans denounced Camping’s teachings in 2013. He eventually negotiated contracts to broadcast more traditional religious content on FR, including Ken Ham, John MacArthur and other religious broadcasters. By 2018, the network had stopped broadcasting reruns of Camping’s Open Forums and had removed any reference to the teacher from their website.

Despite all of this effort, Family Radio has consistently lost money since 2012.

But Camping’s legacy has outlasted these events. An organization known as eBible Fellowship now continues to broadcast and share Camping’s teachings after Family Radio departed from them. The eBible Fellowship began in 2001 after its founder, Chris McCann, worked as a part-time employee at Family Radio. He founded the Fellowship after seriously considering Camping’s teachings on the end of the so-called Church Age. After Family Radio stopped broadcasting the Open Forums, Mccann picked them up and began broadcasting them on his website.

Like Camping, McCann believes that we currently live in the “End of the Church Age” and that the world is undergoing a spiritual judgment. In Mccann’s interpretation, May 21, 2011 was not the end of the world but merely the beginning of a spiritual judgment that would affect the entire world. Mccann predicted that the world would end on Oct. 7, 2015, due to the rising blood moon and supermoon. While Mccann’s predictions were wrong then, he was undeterred. McCann told Religion Unplugged that the Judgment Day mentioned in Revelation is not a single day but an extended period to conclude in 2033.

McCann does not operate a physical church but instead broadcasts his preaching through a Livestream to hundreds of viewers. eBible Fellowship operates an active Facebook group and Youtube presence, where he usually promotes his Open Forum episodes daily to thousands of followers. Many of these listeners are former Family Radio fans and Camping followers, according to McCann. However, his engagement continues to be low, with only a few hundred views for each video on average. His most popular video is currently a 2014 reflection on how May 21 began the spiritual judgment.

McCann presented Camping as “a man who followed the Biblical pattern in speaking the truth of Scripture to a congregation that wanted to have the name of Christ but none of the true teachings of Christ.”

The Networked Individualism of Camping

While Camping avoided discussions of politics or current events on his show, Sarno notes that Camping does have one thing in common with the supposed “Q” of the conspiracy group Qanon: networked individualism.

“Camping’s followers were individual listeners, who gathered to listen to his teachings while in their cars or their houses,” Sarno said. “They were not a collective organization. Camping’s teachings on the end times offered something to organize around.”

Much of this organizing happened in early internet message boards, where listeners could gather and exchange ideas about their Bible readings. They were especially interested in Camping’s teachings, which stood in stark contrast with what their local churches were teaching. While Facebook and Twitter were not the monoliths of information yet, similar trends of social organization have been used by other religious and political movements.

But what stands out about Camping’s moment in history is how minute it seems compared to other social media organizers. While some may accuse Camping of running a grift, Sarno says that Camping legitimately believed what he taught. For him, the world was indeed going to end on that day in May 2011.

Editor’s note: This article was republished from Religion Unplugged under a Creative Commons license.

Chris Hutton is a freelance writer from Indiana, where he typically covers tech and religion stories. Hutton is finishing a Master's degree in sociology at Ball State University. He can be found on Twitter at @chris_journo.