‘Honk for Jesus. Save Your Soul’ Starring Regina Hall and Sterling K. Brown to Premiere at Sundance

‘Honk for Jesus. Save Your Soul’ Starring Regina Hall and Sterling K. Brown to Premiere at Sundance 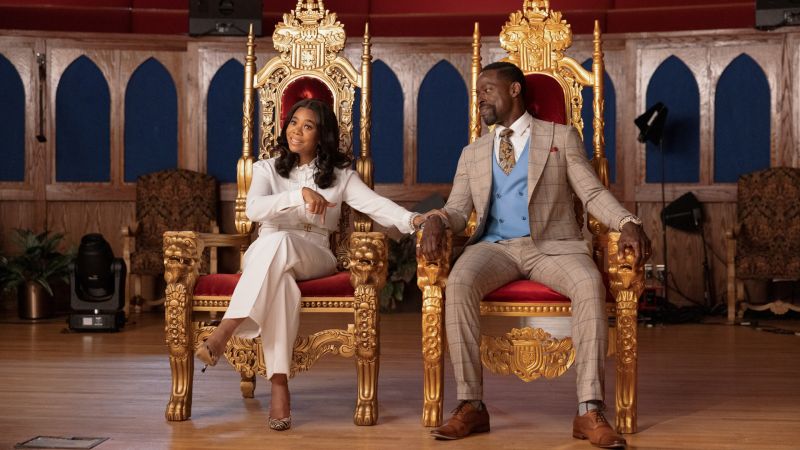 Regina Hall and Sterling K. Brown in "Honk for Jesus. Save Your Soul". (Photo: via sundance.org)

“Honk for Jesus. Save Your Soul,” which skewers for-profit religion via satire, will make its debut at the 2022 Sundance Film Festival in January.

The feature film, which first emerged in 2018 as a 15-minute short, stars Regina Hall (“Black Monday,” “Support the Girls”) and Emmy-winner Sterling K. Brown (“This Is Us”) as the first lady and fallen-from-grace megachurch pastor, respectively, desperately trying to pick up the pieces after a major scandal.

“Honk for Jesus. Save Your Soul,” said to have been shot partly in a faux-documentary style, was described by Sundance as a “lively satire” [that] “explores both the on-camera desperation in image rebranding and the hard truths that fester behind the scenes.”

According to the Sundance program:

As the proud first lady of a Southern Baptist megachurch, Trinitie Childs carries immense responsibility on her shoulders. Her church, Wander To Greater Paths, once served a congregation in the tens of thousands, but after a scandal involving her husband, Pastor Lee-Curtis Childs, forced the church to close temporarily, Trinitie is struggling to manage the aftermath. Now Trinitie and Lee-Curtis must rebuild their congregation and reconcile their faith by all means necessary to make the biggest comeback that commodified religion has ever seen.

If the original short is any indication, “Honk for Jesus. Save Your Soul” highlights the pressure some first ladies may feel in doing everything possible to ensure their husbands save face before the community and the congregation.

However, the short film also centers sexual abuse and hints heavily at one real-life case involving a former megachurch pastor in Georgia, where the project was filmed. Beyond that single case, however, viewers can look to the aftermath of myriad of others involving alleged abuse and misconduct to see how some churches and their pastors recovered, or didn’t.

The “Honk for Jesus. Save Your Soul” short film was real and raw in what it sought to convey, so viewers should expect the feature-length upgrade to be just as biting in its commentary on scandalous religion.

The creative team behind the film are twin sisters Adamma Ebo and Adanne Ebo of Ejime Productions. Their credits are soon to include Amazon Prime’s “Mr. & Mrs. Smith series” and the CW’s “The Girls on the Bus,” according to the Sundance program.