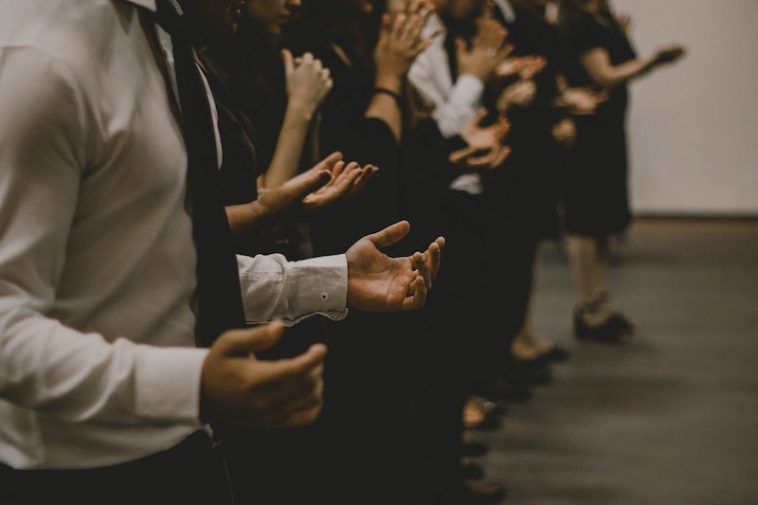 In many Western Christian traditions, we are most familiar with three forms of prayer:

However, in several Christian traditions around the world, believers have practiced a fourth form of prayer for generations as a regular part of congregational life. This style of praying is most readily recognized as a “Korean” style of prayer, but has actually been practiced in African and Asian churches around the world, and even historically African-American churches in the United States.

This prayer form, called tongsung kido (tong-sung ghee-do) in Korean, is the practice of praying one’s own prayers aloud at the same time as others. This “simultaneous prayer out loud” form is not intended to entirely replace other forms or be seen as a “higher” or more “faithful” practice of prayer. Rather, this fourth form (as well as the other three forms) should be seen as complementary to one another and essential together in spiritual formation.

We have biblical examples of the practice of tongsung kido and many helpful reasons why this form should be employed.

There are many places in Scripture where we see prayers that are meant to be said in unison and in call and response forms. What we may not realize is that in various places in Scripture, we have examples of prayers of God’s people that come about passionately, spontaneously, and, if it’s fitting to say, disorderly. For example, in Exodus 2:23b-25 we read:

“The Israelites groaned in their slavery and cried out, and their cry for help because of their slavery went up to God. God heard their groaning and he remembered his covenant with Abraham, with Isaac and with Jacob. So God looked on the Israelites and was concerned about them.”

In the midst of oppression and seeming hopelessness, the people of God lifted up prayers of “groaning” and “cr[ies] for help” to the Lord (see also throughout Judges and 1 Chronicles 5:20). Anyone who has been in similar kinds of circumstances knows that “groaning” and “cries for help” are usually not done in turn-by-turn or a strictly unified and orderly fashion. They are usually done passionately and spontaneously in the midst of chaos or out of desperation. Biblical examples abound for this tongsung kido style of prayer. In fact, we are more hard-pressed to find explicit examples in the Bible of “popcorn prayer.”* This does not render “popcorn prayer” any more or less “biblical” than tongsung kido. But, it should give us reason to pause and wonder if we have wrongfully placed one cultural form of prayer as superior to another.

Beyond biblical examples, tongsung kido may in fact be helpful for spiritual formation, in terms of aiding Western Christians who struggle with group prayers. In the Early Church, a common motto was lex orandi, lex credendi, which means “the law of what is to be prayed is the law of what is to be believed.” Simply put, it is the idea that prayer and belief are integral to one another. A believing person prays; a praying person believes. Although there is a longstanding tradition of prayer, in the modern age in the West we often don’t know where to start, or are afraid to do it.

“The only way Christians can grow in public prayer is to pray publicly. Tongsung kido provides the atmosphere where people can learn by praying, little by little.”

Tongsung kido addresses the fear of being “messy” in our public prayers or “messing up.” Many Christians are likely to confess that they are reticent to praying out loud in groups because they don’t feel polished or don’t want to mess up in public. We are all overly critical of our own prayer ticks and habits, such as repeating the word “just,” awkward cadence and silence, and “ums” and “uhs.” But, when you are with an entire group in which individuals pray out loud simultaneously, you’ll realize that you won’t be able to hear other people’s prayers clearly, and you’ll realize that you have the freedom to speak directly to the Lord without fear of “messiness” or “messing up.” The only way Christians can grow in public prayer is to pray publicly. Tongsung kido provides the atmosphere where people can learn by praying, little by little.

Tongsung kido also addresses the temptation of performance in public prayers. This may be a temptation for those who are already comfortable praying in public but who may struggle because they feel that a spotlight is on them when everyone else is silent. We may start using exaggerated pious words or phrases or emotions because of this. Tongsung kido creates a space where the spotlight is no longer on a single individual. The focus is on praying one-on-one as a child to his or her heavenly Father while in community. We learn that prayer is not a performance but an exercise of childlike faith and dependence.

Those who have participated in “popcorn prayer” have likely experienced having their “prayer stolen” by someone else. When this happens, people will either say that they “echo” the prayer of another or simply remain silent since they are reluctant to repeat the prayer to God. Yet, Jesus even tells us that prayer should be like a persistent widow (Luke 18:1-8), but unlike an unjust judge, the Father loves to hear our petitions and respond (Psalm 145:18; Matthew 7:11)! Tongsung kido creates a space where it is more than okay to repeat a prayer someone has likely already prayed. It creates the possibility for us as a body to be like the persistent widow to our good Father.

Tongsung kido dignifies short prayers, medium prayers, long prayers, choppy prayers, polished prayers, and everything in between. It dignifies big faiths and little faiths. New Christians and seasoned Christians, adults and children, people from all different education levels and walks of life are able to pray as they are in a corporate manner. It teaches us that we are a house of prayer, not just a group of people with one or two designated “good prayers.” We do not have to compare ourselves to others when we pray aloud together and we are able to utter prayers that clean, polished words may not be able to express.

Tongsung kido opens the time of prayer for different emotions. Often in other forms of prayer, a “mood” is set early on, and there is a temptation to not want to shift the “mood.” A “popcorn prayer” beginning with thankfulness and joy is hard to follow up with a prayer of lament and weeping, or vice versa. We may “sit the prayer out” if we don’t feel like we don’t want to “break the mood.” Tongsung kido creates a space where different emotions can be expressed corporately. While one person may be expressing thankfulness and joy, another may be expressing contrition and lament. Together, we are expressing the full range of godly emotions in prayer.

How to Begin Tongsung Kido at Your Church

One possible starting point is to create a time in the service for corporate prayer. In the church where I worship, during Communion, we gather at one of four tables in the sanctuary to pray together before we partake. To apply tongsung kido to our context, the leaders of each table could decide once a month (or another set period of time) to instruct those around their table on the practice of tongsung kido. What may be helpful is to provide prayer prompts at the beginning by asking for prayer requests and/or giving topics for prayer. Then, the leaders can instruct those around the table that they will all be praying aloud, and that after a set amount of time, the leader will interrupt and prompt the group to pray the Lord’s Prayer. The leaders should be sensitive to make sure to tell others that it is okay for the time of prayer to seem disorderly or “messy.” This is a time of freedom to be able to speak to our heavenly Father out loud without the fear of “messing up.”

The second place to implement tongsung kido would be in various Bible studies and community groups. Leaders of these studies/groups could set one time in the month (or whatever seems best) during their meetings to pray in this form, giving guidance similar to the Communion prayer time example above. This will help the practice become a natural flow between the liturgy of the gathered and the liturgy of the scattered.

Third, guidance should be given for families and individuals to try out this prayer form in their own homes and families (if applicable). This will enable the practice to move from Sunday liturgy to daily liturgy. This may be a helpful way for families with young children to have the courage to pray out loud when they ordinarily may be reluctant to do so. Friendships can develop and be enriched within the church as people pray together outside of official church events and ministries.

It is important to state that tongsung kido is not a silver bullet to cure all of our fears and temptations related to prayer. It is also important to reiterate that tongsung kido is not superior to other forms of prayer and no prayer form is inherently deficient. In many ways, exploring a new form of prayer is a corporate exercise of seeing what the Apostle Paul means when he says that we are all members of one Body in Christ (1 Corinthians 12:12-31). We need to not only learn from one another in the local church, but we also need to learn from members of the whole Body of Christ around the world and across time. We can learn from our brothers and sisters from other cultures and backgrounds and grow with them together into maturity in Christ. This is the Lord’s intention, that we would need each other as members of one Body. What a precious truth that is!

* Paul does direct the Corinthian church to speak one at a time when someone speaks in tongues (1 Corinthians 14:27). However, it is likely incorrect to assume that the apostolic era gift of tongues is equivalent to or synonymous to prayer. In fact, in the context of 1 Corinthians, it appears that speaking in tongues, when interpreted, is seen as equivalent to the gift of prophecy (i.e. speaking forth God’s word authoritatively). Paul’s concern is that the Corinthian Christians are able to hear the word of God spoken authoritatively in an orderly manner. This is why speaking in tongues should be done one at a time and with an interpreter. In contrast, prayer is not speaking forth God’s word authoritatively, but it is the act of believers speaking back God’s promises to God in thankfulness and petition. 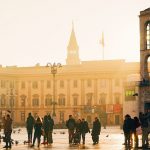