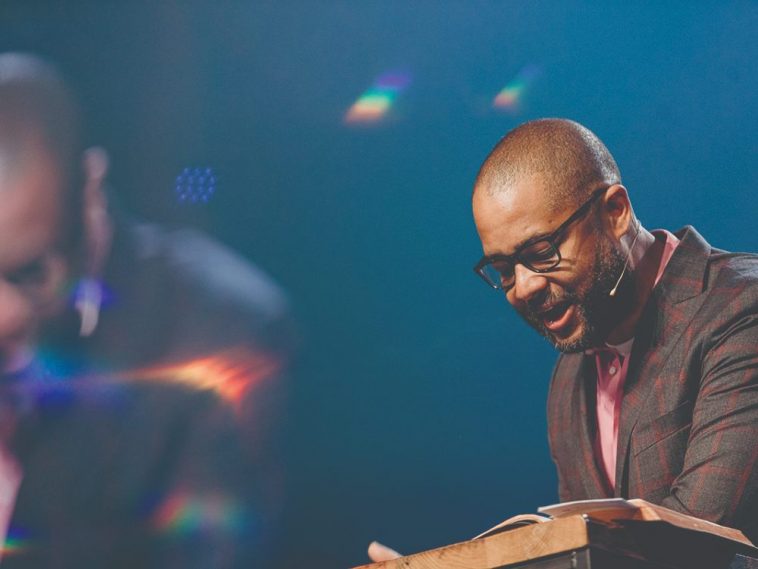 Bryan Loritts is lead pastor of Abundant Life Church in Silicon Valley, California. In 2003, Loritts co-founded Fellowship Memphis, a multiethnic church in Tennessee, and later founded the Kainos Movement, an organization committed to seeing the multiethnic church become the new normal in our world. He is the editor of Letters to a Birmingham Jail: A Response to the Words and Dreams of Dr. Martin Luther King, Jr. and Right Color, Wrong Culture: The Type of Leader Your Organization Needs to Become Multiethnic, and several other award-winning books.

Loritts and Okuwobi were interviewed individually after each spoke at Catalyst Cincinnati (catalystleader.com). Although they minister in different regions of the country, their individual conversations about multiethnic church ministry reveal similar challenges, offer similar suggestions, and find similar encouragement.

When it comes down to it—no matter where we live in these United States—the mission to be truly united in Christ puts everyone on common ground.

Why do you think a multiethnic church is such a difficult concept?

Okuwobi: I think the multiethnic concept is challenging because we have start-ed to believe diversity is a cultural thing and not a biblical thing. So when we talk about having a multiethnic church, we always go back to the theology. This is what Jesus en-visioned before he died in John 17. This is what Paul talked about—one new humanity. This is what happened in Acts 13 when they were finally called Christians. You had all these different people doing life together who would never do life together under any circumstance. I think it becomes challenging when we get caught up in the messages of the culture and that gives us an out, right? You have to get comfortable with being uncomfortable.

What steps can churches take to move an existing homogeneous congregation to multicultural openness?

Your worship is the same thing. So whatever you can do at the highest levels of leadership in a local church to communicate multiethnic—kind of this distribution of pow-er—I think is going to yield a lot of fruit. Be-cause when a minority walks into a church, or anybody for that matter, they’re fundamentally asking, “Whose church is this? Am I going to be a visitor here? Am I going to feel like an immigrant on foreign territory? Or is this going to be home for me?” Big difference.

Okuwobi: Our lead pastor just got a vision from God that he needed to start building relationships with African-American pastors around the city. There was no motive other than, “I want to get to know you and have a relationship with you.” It has to be authentic and from the relationships you have in your own life.

From there he started to understand the racial disparity and gaps, and God started download(ing) in him the theology: “This has been in My word all along.” We in the church have just missed it. Our pastor decided this needs to happen. Diversifying leadership became an important element. When you want to have a church look more like heaven—every tribe, tongue, and nation—you need to start with the people who are on the stage. Because when people walk in the door, they need to know people like me are welcome here.

Our lead pastor was in a relationship with another local senior pastor who was tired and needed a break—and he asked, “Would you like an associate pastor of col-or?” That happened on the same day that Cincinnati was experiencing unrest because of the death of Timothy Thomas. So in this fracture, in this racial thing where the world is saying we can’t get along, God is saying, “I’m going to send you the right people to help us all get along and it’s going to start in the church.” So that was a big step. And bringing on an associate pastor of color, families of color started coming to church.

Kelly Carr, former editor of The Lookout, is a writing & editing consultant in Cincinnati (editoroflife.com).