It’s 2019, and talking about race is still a social taboo in the U.S. inside and outside of many churches. Despite this, Latasha Morrison isn’t afraid to “tell the truth and shame the devil.” Morrison is the founder and president of Be the Bridge to Racial Unity, an organization that seeks to move people and culture to racial healing, equity, and reconciliation. It’s a gargantuan undertaking that she pursues willingly and prayerfully. In this interview with Faithfully Magazine, Morrison discusses her new book, Be the Bridge: Pursuing God’s Heart for Racial Reconciliation, critical spiritual disciplines for bridge-builders, and why she’s sometimes apt to watch lackluster Hallmark movies.

The interview has been edited for clarity and brevity.

How did you become a bridge-builder?

If you ask anyone in my family—that’s just been like a part of who I am, just growing up, you know. I’ve always been a peacemaker. Regardless of the subject matter or places I’m intersecting in, it’s a part of who I am. It’s not something I’ve become in that sense. Even when I had my life plan done, it was like, you know, I’m a leader, so I’m a leader outside of whether I’m leading Be the Bridge or not. I’m a bridge-builder. It’s just a part of my DNA.

I would also say it’s hard to be something that you’re not, but there’s different ways of bridge-building. I think the type of bridge program that we do is a little different.

How is your way of building bridges different?

I think because we’re trying to move toward reconciliation. We’re trying to make something that was broken to make it right. So I think in the process of that, what you’re talking about is not a kumbaya, where we’re on the bridge and we’re all joining hands and you have your say, I have my say, and we respect each other. It isn’t really like that because we’re dealing with, in some circumstances, life and death…

So we have to talk to them (bridge-builders) about what it means to lament and how you love: how do you listen, learn, and leverage?

This book definitely feels timely. How was it birthed and how is it different from other Christian books about reconciliation?

It was birthed from the guide I created a few years ago that really gave people a simple structure to start engaging in the conversation. It wasn’t the organization (Be the Bridge); it was just a simple structure. Then from there, after that kind of took off, we went back and said, ‘There’s a lot of things we left out. How do we do this in a more efficient and better way?’ And so we updated it. That’s how it was birthed.

What felt important to include when you were thinking about the content for Be the Bridge?

I wanted it to start with the personal story where you kind of pull people in and then you give them this historical context because history keeps receipts, and people don’t know history and history has been erased and eroded and washed away.

And truth is the ground work. You know, history is the seedbed of this work of reconciliation. You can’t have it without truth. So we want to give that historical truth. Then, when you lead people there, they don’t know what to do, especially White people; you got to give some sense of hope, you know? So then what we wanted to do was tell a Be the Bridge story to show how people are working through this concept and process, so they believe there is hope on the other side of this. 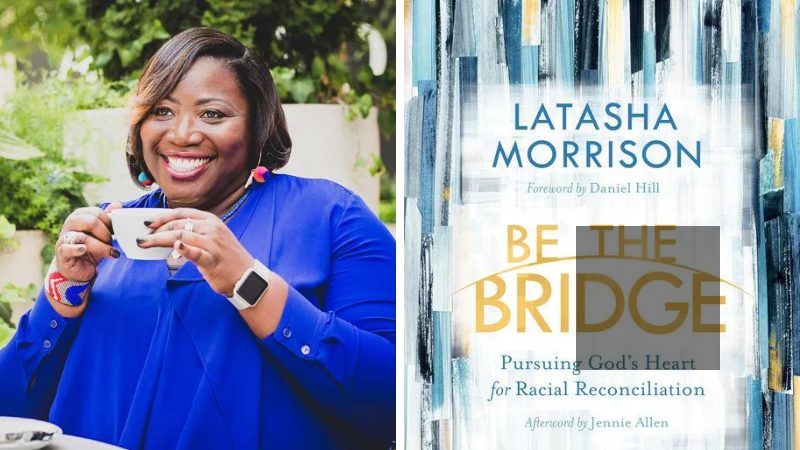 In the book, you talk about the need for White Americans in particular to exercise humility on the road to reconciliation, but what are some attributes that people of color can embrace on this journey?

I think some of us are really disconnected from the history, and sometimes people carry shame of the history that we’ve had to assimilate a lot through the process for survival. So I think there’s a disconnect. I hope people can look at this and want to learn more history because we are also a product of our school systems.

Amen. I appreciate Be the Bridge on so many levels, but I love that you talk about the concept of lament, particularly the importance of White people learning to lament. What stood out to me is that in the African-American community, lament is so common, even if the word isn’t used. We lament when we talk about the racism we witness in the news. We lament when we discuss the micro-aggressions we experience at work or on the bus. Lamenting is a part of our everyday life. And so I wonder how White Americans, particularly White Christians, go through this very critical step in the process of reconciliation when it feels so culturally unfamiliar?

When I think about what we as African Americans…look at the things that were birthed out of our lament, things that have shaped and changed the world… Lament draws us closer to God. And I think that lament for a White person allows them to see God and another manifestation of who God is and how He’s not just about strength and power, but meekness and also sorrow. When you think about even the life of Jesus and just two years into his life, there was a great sorrow.

Lament is sitting in something. It leads us toward justice. So I think that without it, we get the results of what we see in the mission field today, like White saviorism, because it’s good works, but self-centered.

It (paternalism) is not about making things right for the long haul. It’s about how do we make this right now, or how do I feel good about this, or how do I have less guilt and shame for this? One is more like you said: self-centered. The other one is more God-centered: Is this being birthed from a place of not self-righteousness, but the righteousness of God? So I think it’s just different motivating factors, where it’s not so much as me trying to make you like me or like my culture, but helping you become all that God created you to be and trying to reorder the things that have been disordered. It’s more alignment with God. It’s like we’re walking with God, we’re partnering with God. I think it’s a different heart motivation. How do I partner with God in the work that He’s already doing?

But I would say some of those spiritual disciplines that I have to walk in is that of repentance, that of truth, that of confession, that of forgiveness. I think another discipline would be that of unconditional love. I was talking to some friends about this… I need to long for redemption as much as I long for justice. And if I long for justice more than I’m longing for redemption, then I’m centering myself in that. That’s hard, you know, because you feel justified in everything. We talk about, we call it out: love your neighbor as yourself, but that also applies to me loving my neighborhood as myself. So even that neighbor that means harm to me, that’s hard…. When we’re saying that to the White Christian, I have to embrace that same discipline.

In addition to the spiritual disciplines, how do you take care of you while doing this work? How do you care for Latasha?

I think rest something is always a work in process, you know? Also having people praying for you, and making sure that you commit to a lifestyle of prayer. Also realizing that God wants to carry our heavy burdens. We were going through a consulting with different consultants as it relates to our infrastructure and strategic planning. And just all of a sudden in that meeting I was like, Lord, this is just, it’s too much. This is too big. And I think the weight of that, it makes you feel vulnerable, but also I think that’s exactly where God wants you, where you can bring all of those burdens to God. So it just helps me realize that it’s when I’m weak that He is strong, just a basic scriptural remembrance…

Exactly, those cheesy movies that maybe have one Black person…

Yes, and watch them and enjoy it, but still write a post that talks about the lack of diversity…

Yes, like, “I love this movie, but let me also say that you should have had more Black people.

Last question: if someone wants to become a part of the Be the Bridge community, what should they do?

So Be the Bridge doesn’t have chapters or anything like that, but people can go to our website, they can download the guide and really just start a conversation, even if it’s just you and a friend or you and your community. We also have an online community, a Facebook group. It’s like a starter group where people come there and connect online before they connect relationally in their communities. It’s [called] “Be the Bridge to Racial Unity.”

Read chapter 1 of Be the Bridge online for free.