The Very Reverend Michael J. Battle, Ph.D. is the Herbert Thompson Professor of Church and Society and the Director of the Desmond Tutu Center at General Theological Seminary. Ordained by Archbishop Desmond Tutu, Battle currently serves as vicar and rector in the Episcopal Church. Battle has written numerous works on the intersection of spirituality and reconciliation.

Faithfully Magazine spoke with Battle regarding his latest book, Desmond Tutu: A Spiritual Biography of South Africa’s Confessor, which provides a spiritual analysis of Tutu’s life and work in South Africa. The transcript has been edited for clarity.

Reverend Michael Battle, you are the Director of the Desmond Tutu Center at General Theological Seminary. I’d love to hear a little bit more about you and your work.

For a long time, I have worked in theology, especially around concepts of reconciliation, non-violence, human spirituality, and moral theology. I had a wonderful opportunity to write my Ph.D. dissertation on Desmond Tutu’s theology and had the miraculous experience of living with him in 1993 and 1994. A lot of the themes in my book really come out of that crucible experience right before South Africa became a real democracy. So much of my work, then, has been trying to put together how Christian spirituality meshes with politics and how is it that we can have a life of integrity in a political world, especially as Christians.

Tell us about how you first crossed paths with Desmond Tutu.

But I was hit by this epiphany that we already have a lot of work on White European, male theologians. And, interestingly enough, the medieval scholar at Duke University, where I was doing my Ph.D., she’s the one who told me that, and that I should really think about what it is I really want to study. Who is it that I would actually want to study even if I wasn’t doing a Ph.D.?

So, of course, as I prayed about that, Desmond Tutu came immediately to mind, and the wonderful confluence of events was that he was on sabbatical at Emory. It’s only about a six-hour drive from Duke University in Durham, North Carolina. So I went down and met with him. And the first thing he said was, “Let’s pray.” I think you know, when that occurred, I knew that this wasn’t just going to be an academic enterprise. From that conversation, I was able to go down to South Africa. I wasn’t planning on living with Archbishop Tutu; I was going to stay in like a youth hostel and just try to go through his papers. But, I think the Holy Spirit just opened doors for me not just to do this academic work. [Tutu] ordained me an Anglican Episcopal priest, and so that’s really how things got started.

I shouldn’t even have to ask, but there might be some people who are unfamiliar with Desmond Tutu and the work that he’s done. Can you provide an overview about why we should know about him and his work? 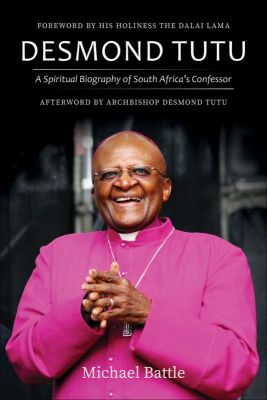 You just put your finger on the main reason I wrote the book. Younger generations really do not know about him. One way to understand his significance is that he won the Nobel Peace Prize in 1984. But he also is the kind of person who has humility. At one point during South Africa’s history, when Nelson Mandela was put in prison for 26 years, Mandela did not have the public attention of South Africa and the world because the apartheid government was intentionally keeping him out of the public eye. During that time, they measured that Tutu’s popularity was more than Nelson Mandela’s. But because of Tutu’s humility, his training by monks, and his deep Christian spirituality, he never let that go to his head. And in many ways, he was like John the Baptist, knowing that he was going to have to rescind and go into the shadows, especially in support of Nelson Mandela. So in some ways, because of his personality, his characteristics, he doesn’t really seek the limelight. I feel as though it’s my responsibility to help especially younger generations to know about him. I call him a saint.

Mysticism, especially in the Western world, is the concept of becoming one with God, union with God. And I framed my whole book around this concept of Christian mysticism, which has three movements. You begin with purgation, and then you move into illumination, and then you discover union. So, that’s the route of Christian mysticism, the route to becoming one with God.

I think Tutu is a Christian mystic for many reasons. One reason I have already mentioned, that he was trained by monks who are disciplined in this process of Christian mysticism. But also because of what he faced, these impossible odds of overcoming systemic racism and colonialism. He was also up against another form of Christianity that was supporting racism, supporting apartheid, thinking that God was choosing them to perform these racist acts. So Tutu was up against so much, and Christian mysticism provided a foundation for him for longevity and resilience in the face of all this, and also the discernment of how to navigate such a complicated world.

Can you talk about Ubuntu theology and how that is important to understand Tutu’s work?

Ubuntu is an African concept, especially for the Sub-Saharan ethnicities. It comes from the Bantu languages. Ubuntu is really the word for human. And it’s important because it’s not just a singular concept for what it means to be human. It’s an overall worldview, that to be human means to be an individual in community. So there are proverbs that help to explain what I’m saying, such as, “A person is a person through other persons.” Or another proverb is, “I am because we are, and because we are, I am.” So it’s a concept of interdependence. Tutu really used that as he tried to navigate the politics and of racist, apartheid, South Africa. It was a powerful way of using an African cultural worldview in ways in which he was trying to explain to White South Africans that he also needed them. He was bringing together an African worldview and Christian spirituality to really navigate a very difficult situation.

If we as Christians are not involved in politics in a responsible way, then we find ourselves, to use my daughter's term, gaslighting the system. - The Very Rev. Michael J. Battle Jr. Click to Tweet

We often have put in place practices of separating religion and politics. Most people in the Western world know that. But if you think about it, it’s a false dichotomy. I’m just thinking about the President of the United States and about all the things that we expect from that President. If you watch the presidential debates, we’re basically making this a divine figure. We’re placing on this person all of the ills of society as well as almost a Messiah kind of complex that they have to do in order to be a good U.S. President.

Politics innately is a religious category because it’s about how a society can find what’s good for all the people. Having said that, again, the U.S. Constitution and many other Western constitutions separate what we consider as political parties and partisan politics from religion and from what we understand religion to be. Although, I would argue, if a Martian looked at what we call “politics” and what we call “religion,” they wouldn’t know any difference. So political spirituality is another way of getting at the famous axiom that you hear many people say today: “I’m spiritual, but not religious.” When I say “political spirituality,” I’m trying to get folks to take seriously the intersection between politics and religion.

Does thinking that way prevent real discipleship, in a sense, for the church for Christians of how to engage in the real world?

Because of what has occurred in the development of the United States, those who have articulated what it means to be “political” have for the most of the history of this country been White, and literally wrote the Constitution. If we as Christians are not involved in politics in a responsible way, then we find ourselves, to use my daughter’s term, gaslighting the system. We, as Christians, can hide behind not being involved in politics when we want to for our own convenience, such as a White Christian could say, “Well, I’m not going to get involved in Black Lives Matter because that’s a political issue.” So the problem is that there’s a kind of smoke and mirrors distinction that gets in the way of true development of human civilization. The false dichotomies must be exposed. And we have to have disciplines to make sure all voices, all ethnicities, all affinity groups can coexist.

The United States needs a Truth and Reconciliation Commission to be able to put in public the ills of the founding of this country, the “Big Bang” that put this country in motion. Click to Tweet

In terms of the first part of the question, Christian nationalism, White nationalism, nationalisms — to me the sort of provocative thought “a fish doesn’t know it’s wet” comes to mind. What I mean by that is, most U.S. citizens who articulate “country first” do not and are not aware of all that comes with that kind of a worldview. “Country first” was what was used in many ways to justify slavery. “Country first” or “Make America Great Again” is assuming that during the time of slavery and Jim Crow and Asian concentration camps, that those were the “better days.” So those who think, “Keep America Great,” or “Let’s go back to these better times,” are wet with a nationalism that is usually for a certain kind of people. So that’s the reason why I think Tutu’s genius of bringing out the nationalism of the Afrikaner apartheid society was basically an exorcism, putting out in public the evil that most people were taking for granted.

I think we can learn from Tutu’s Christian spirituality and his political acumen. What we can learn is what I think he will become most known for, and that is the Truth and Reconciliation Commission. The United States needs a Truth and Reconciliation Commission to be able to put in public the ills of the founding of this country, the “Big Bang” that put this country in motion. We need to have a “come to Jesus” talk about that, because we are beating around the bush in terms of how we are constantly going back into public, racial incidents that reveal the discrepancies of human beings based on race. Unless we can talk about all that in public and in a safe way, we just keep repeating the same mistakes. A Truth and Reconciliation Commission creates a safe framework to be able to tell these stories in public, and then to put in motion ways in which we can practice restorative justice, not retributive justice, so that we stop repeating the same mistakes.