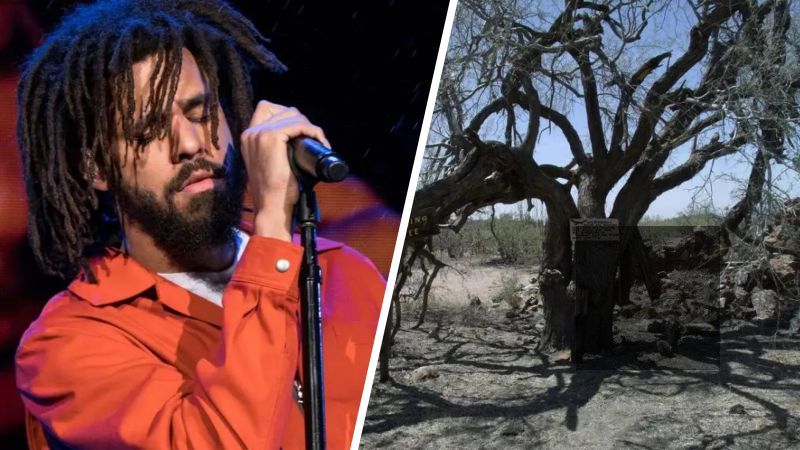 James H. Cone’s masterful thesis in The Cross and the Lynching Tree asserts that the Black person hanged on the lynching tree participates in the suffering of Christ on the cross. Christ unites himself to and reveals himself in the suffering, oppression, and state-sanctioned execution of Black people. His resurrection gives us hope that our suffering in this life is not the last word. The belief that he makes us in his image and likeness and that he identifies with those who are unjustly persecuted has inspired Black Christian communities to stand up to injustice and fight for the equal treatment they deserve.

In his book, Cone examines how Black church hymns and spirituals, as well as secular blues music, paint a vivid picture of this tension between hope and suffering, faith and doubt, faced by Black Americans. Rapper J. Cole’s “Javari (Want You to Fly)” brings Cone’s theological vision to life in a way that speaks to the current struggle against police brutality and the hope for a more just America.

Time for a New Story

A snippet of “Javari (Want You to Fly)” was first featured in J. Cole’s 2017 documentary 4 Your Eyez Only. The song played over scenes of J. Cole observing a church service where enthusiastic parishioners were giving praise to God and encouraging one another with songs and the scriptures. “God is real and he usin’ me for a bigger purpose,” raps J. Cole. The snippet featured the full song’s first verse, in which J. Cole professes his belief in God, but expresses his ambivalence toward any form of an organized Christianity and the scriptures.

“Sometimes I think that these verses can help a person way more than the ones they readin’ in churches on days of worship,” he raps. Music tends to speak to today’s youth more loudly than scriptures written several millennia ago.

“No disrespect to the Lord and Savior, that ain’t just ego. I just observe that them words no longer relate to people, ’cause modern times be flooded with dollar signs and social media stuntin’, my n****s just wanna shine. They frame of mind so far removed from the days and times of Nazareth. Life these days is a labyrinth, in a maze so elaborate.”

Needless to say, contemporary men and women are facing circumstances that are quite distinct from first century Palestine. One can argue whether or not it’s the scriptures themselves or the way they are presented that is no longer relatable to 21st century men and women, but J. Cole’s next lines propose an idea for both churched and unchurched believers to ponder:

“All of that to say maybe the hood need a new faith, a new story about a boy from not too far from where you stay.”

In the song’s full version which was released last month, J. Cole proceeds to tell the story of Javari, “born of a [seventeen year old] virgin named Yolanda,” who was kicked out of her home. Though she cried in anguish, she received a message that God was protecting her and her son.

Much of the lyrics in this verse mirror the Annunciation story in Luke’s Gospel. Yolanda raised Javari in Section 8 housing, and he grew to become a faith-filled young man whose words inspired and encouraged those he met. J. Cole continues echoing the Gospels when he recounts the story of when Javari met a young girl named Toya who was dismissed by others for her promiscuity. Similar to Jesus’ encounters with the woman caught in adultery and the Samaritan woman at the well, Javari isn’t afraid to talk to Toya and embrace her.

Javari “told her that God loved her no matter who she let beat, but bein’ promiscuous is a sign that there’s something deep that troubles her soul… She broke down admittin’ her stepfather had touched her for years, she kept it secret for fear of her mother’s grief. Now the bitterness she feels for that n***a is at a peak and her lack of self-esteem is the reason that she would sleep with anybody.”

Javari continues to instruct her “to forgive her stepfather, though he was wrong he was sick, afflicted by evil, by the power of the switch.” He teaches her about the dangers of resentment and the freedom that comes from forgiveness: “How you feel about people who hurt you is truly a gift. The thing that can make you rich or keep you down in a ditch. If you refuse to let go off the ground, then how can you lift up to the sky where you belong with the most high. Now wipe those tears from your eyes, my father wants you to fly.”

Javari quickly develops a following in the neighborhood (12 homies, to be precise) as he helps people abandon drugs and violence and instead “fill their bodies with the Spirit.” The powers that be are perplexed as to how Javari got these people to leave behind their old, destructive ways. They send the police to keep an eye on this suspicious figure.

One night, the police burst into Javari’s home and accuse him of drug possession: “But Vari sat calmly as if he had been expectin’, heart full of love, even for those who need to oppress him. They told him ‘hands up’ and he did just as they directed. They fired on him, claiming they thought he reached for a weapon. He laid on the floor breathless, blood leakin’ from his chest. Plus a bullet-hole through both of his palms, ain’t that a message?”

To everyone’s surprise, Javari resurrects from the dead after three days. In an Ascension-like proclamation, “shinin’ like a million diamond chains, God flowin’ from every inch of his frame,” he says to the people, “Hear me out, let me be your proof, my father is real. And through love, homie, peace can be found in the ville. I died for you, so that one day you would be able to see you a child of God, just like me. And I want you to fly.”

An Urgent Call: Recognizing the Face of Christ

Javari speaks to J. Cole’s need for a proximate Christ, a Christ who reveals himself through the struggles and triumphs, the pains and desires of his neighbor. Click to Tweet

Javari speaks to J. Cole’s need for a proximate Christ, a Christ who reveals himself through the struggles and triumphs, the pains and desires of his neighbor. This is not a God who sits up in the clouds, granting prayers from afar and promising peace in the next life, but a God who identifies with us, who comes down and incarnates his love among us.

This is the kind of theology that Cone sees as a path forward for American Christians in The Cross and the Lynching Tree. He laments that so many Blacks leave the church, feeling disillusioned with its lack of engagement with Black oppression and the struggle for systemic change. He decries White Christians who ignore God’s presence in the suffering of their Black brothers and sisters, and who sit idly by watching, maybe praying at best, while they continue to struggle under oppressive structures.

J. Cole’s “Javari” provides us a vision for American Christians, both Black and White, to progress forward. We ought to recognize and encounter the face of Christ scourged and crucified in the face of the Black person—lynched and beaten, shot by the police, dealing with generational poverty, being deprived of adequate job opportunities, underrepresented, or portrayed as less than her true dignity in the media. Recognize him and respond to him. Console him and defend him. Offer him shelter and drink, correct the ones that oppress him, and unite yourself to him in loving communion. Churches ought to serve as spaces that enable and foster this possibility to encounter Jesus in the flesh and that advocate for the dignity and rights of each of His children who are made in His image.

“Throughout the twentieth century, African Americans continued to struggle to reconcile their faith in God’s justice and love with the persistence of [B]lack suffering,” writes Cone. “Dealing with nearly four hundred years of ongoing suffering in African American history was enough to make any [B]lack person lose faith and roam in a blues-like way, trying to find meaning in an absurd world ofwhite supremacy.”

Both J. Cole’s ambivalence toward the church and his desire to see Christ in today’s world reflect the spiritual struggles and wrestling of so many before him. “Javari” offers a path forward for spiritually hungry young people who yearn for justice. It points to how the desire for justice points to a greater existential journey. But it also raises the question of whether God could truly enter into the sufferings and injustices faced by so many people in today’s world.﻿