Jemar Tisby is president of The Witness, a Black Christian Collective and co-host of the “Pass The Mic” podcast. Tisby is also a Ph.D. student in History at the University of Mississippi studying race, religion, and social movements in the 20th century. He takes on those subjects in his debut book, The Color of Compromise: The Truth about the American Church’s Complicity in Racism.

This is part one of Faithfully Magazine’s interview with Tisby, conducted by phone. It has been edited and condensed for clarity. You can read part two of the interview here.

You wrote The Color of Compromise, a book that is intentionally trying to take a good, hard look at history to see the church’s role in racism. Why is history so important for Christians to learn and know? 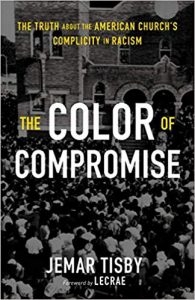 The more you study history the more you see that when it comes to race and Christianity, it’s a story of compromise rather than courage. What I mean by that is, throughout U.S. history, when there have been opportunities in the church or in the broader society to stand against racism, to promote the equality of all people—particularly of Black people—many times, the church institutionally has shrunk back in that critical juncture. So, I’m always wary of highlighting instances when Christians have in fact pushed back against racism, not because they’re not important but because we like to latch onto those positive stories and make a blanket assessment of the entire American church narrative. So, we’ll look at—he’s not even an American—but, we’ll look at Christians like Wilberforce and say, “See! We are the heroes of our own story.” But the reality is that the Christians who’ve been against racism were in the vast minority. And when they did stand against racism, they faced incredible opposition from their own brothers and sisters in Christ.

What happens when Christians in America don’t know their history—both of the American church and U.S. history in general?