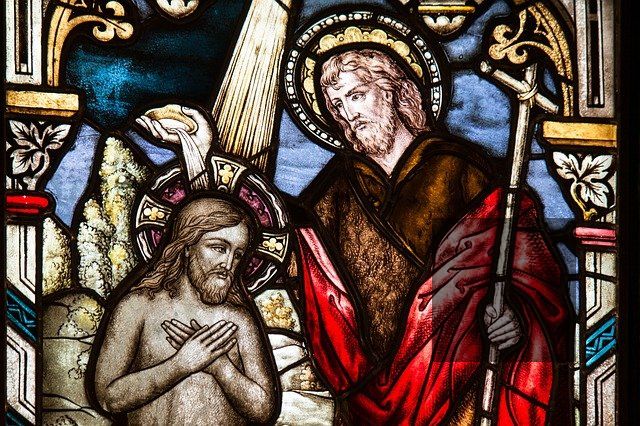 Jesus and John the Baptist had a special relationship, according to the Bible. But what’s the extent of that relationship? Were they more than just cousins?

Who Was John the Baptist?

Matthew 3 describes John the Baptist as someone preaching repentance in the Judean desert. Based on the way he is described, it appears John was all business.

Matthew 3:4 states that “John’s clothes were made of camel’s hair, and he had a leather belt around his waist. His food was locusts and wild honey.”

John the Baptist’s message and ministry were fairly popular, according to the Bible. It states in Matthew 3:5-6: “Then the people of Jerusalem and all Judea were going out to him, and all the region along the Jordan, and they were baptized by him in the river Jordan, confessing their sins.”

John publicly proclaimed that Jesus was the Messiah the Jewish people had been waiting for. The Bible suggests that John functioned in the spirit of the prophet Elijah.

Before Jesus and John the Baptist Were Born

But going farther back, the Bible shows that Jesus’ mother Mary is a relative of Elizabeth. Elizabeth is John the Baptist’s mother. The Bible doesn’t explicitly describe Elizabeth as Mary’s “cousin.” Instead, the term “relative” or “kinswoman” (sungenis, συγγενίς) is used. Many scholars seem to agree that the use of this term indicates that Mary and Elizabeth were cousins.

After Mary learns that she is to miraculously become pregnant with the Christ-child, she visits Elizabeth. Strangely, Elizabeth’s child — John the Baptist — gets really excited upon Mary’s arrival.

Luke 1:41-44 states: “When Elizabeth heard Mary’s greeting, the baby leaped in her womb, and Elizabeth was filled with the Holy Spirit. In a loud voice she exclaimed: ‘Blessed are you among women, and blessed is the child you will bear! But why am I so favored, that the mother of my Lord should come to me? As soon as the sound of your greeting reached my ears, the baby in my womb leaped for joy.”

While we know that Jesus was very special, we also see very early on that John the Baptist was no ordinary child either. John’s uniqueness was likely tied to the fact that he was “filled with the Holy Spirit even before he [was] born” (Luke 1:15).

The Bible tells us that Elizabeth was already about six months pregnant by the time Mary arrived. It’s possible Mary witnessed and even helped Elizabeth’s delivery, since the Bible says she stayed with her cousin for three months.

Both Jesus and John the Baptist get a detailed telling of their conceptions. Because of the Christmas tradition, people are familiar with Mary’s strange conception. John’s parents, on the other hand, conceived through more traditional means.

John’s birth was considered a miracle because his parents were past the child-bearing age and Elizabeth couldn’t have children anyway. Luke 1:7 states that though they were favored by God, “they were childless because Elizabeth was not able to conceive, and they were both very old.”

So in reality, Zechariah and Elizabeth should not have had a child.

Further, because John’s father Zechariah doubted the news he was told by Gabriel, the same angel who spoke to Mary, he was temporarily cursed with muteness.

Although John’s birth came about through traditional means, it certainly qualifies as miraculous.

Is it possible Jesus spent time with John the Baptist as one of his followers, like virgin Mary spent time with Elizabeth? Perhaps John spent some time mentoring his young cousin, without yet realizing who he really was. If Jesus and John the Baptist spent more time together than is shown in the Bible, apparently it wasn’t important enough to be included in the accounts.

John the Baptist beginning his public ministry before Jesus started his seems to be important in terms of preparing the people. Through John’s ministry of proclamation about a coming Savior and the need to have one’s sins washed away, the people were prepared to consider Jesus as that Savior.

While the people were looking to John the Baptist as a guide to their salvation, he made it clear that Jesus was greater than himself. He told his followers that it was natural that more people were interested in Jesus, saying in John 3:30, “He must become greater; I must become less.”

Both Jesus and John the Baptist Die Violently

Continuing their patterns of similarity, both Jesus and John the Baptist died unnatural deaths. As Christians remember every year during Easter, Jesus was executed by the Roman Empire. The mode of execution was crucifixion, said to be a very painful and lengthy means of death. In addition, Jesus was beaten by Roman soldiers before he was crucified.

John the Baptist was killed before Jesus was crucified. He may not have suffered as much as his young cousin.

John sparked the ire of Herodias due to his public condemnation of her marriage to Herod Antipas. Herod Antipas was her former husband’s brother. Eventually, John was arrested by Antipas and beheaded. The Bible doesn’t indicate if John was beaten or tortured before his beheading, so it’s likely his death was swift.

The New Testament tells us where Jesus’ body was buried. But no mention is made of where John the Baptist’s body, or his severed head, was buried. We are simply told in Matthew 14:2 “John’s disciples came and took his body and buried it.”

Upon hearing of John’s death, the next verse states that Jesus “withdrew by boat privately to a solitary place.”

Jesus apparently took the death of his cousin to heart, as John had dedicated his life to preparing the people for his arrival. Perhaps the two had even spent a lot of time together as children and were especially close. Either way, the Bible makes it clear Jesus and John the Baptist were not just ministry “rivals” or partners. They were related, too, likely cousins.