A still from "La Genese".( (Screengrab)

John Piper, author and founder of the popular Desiring God Ministries, suggested that the rape of the biblical figure Dinah could be viewed as “just another hookup” by religious outsiders.

“The sons of Jacob were indignant and very angry, because Shechem had done an outrageous thing in Israel by lying with their sister, for such a thing must not be done,” Piper tweeted, quoting Genesis 34:7 on Monday.

He added: “Outside the people of God it was just another hookup. Inside it was an outrage.” 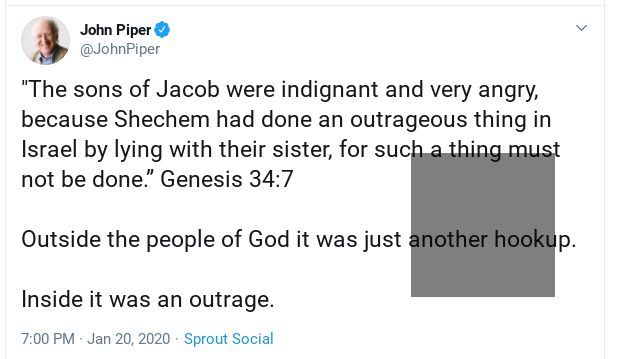 Genesis 34 describes Dinah as the daughter of Leah (Jacob’s unintended wife), who took the unusual step of leaving her family’s camp, perhaps unaccompanied, “to meet the young women of the land.” Shechem, the very important son of the leading family of the area (the city was named after him), soon noticed her.

“When Shechem son of Hamor the Hivite, who ruled that area, saw her, he grabbed her, forced himself on her, and sexually assaulted her,” Genesis 34:2 reads.

While the ESV translation Piper uses in his tweet states Shechem “seized her and lay with her and humiliated her,” the consensus is that the Scripture’s phrasing and context infer that he raped her (as per the NET Bible word choice above). The telling of Dinah’s ordeal unquestionably paints her as the victim.

There’s no doubt Piper also views Shechem’s attack on Dinah as rape, as he described it as such in a 2013 Desiring God Ministries article about “messed up families.”

The Bible goes on to tell how Shechem fell in love with his victim and eventually asked his father to look into arranging their marriage. Dinah’s brothers, Simeon and Levi, were understandably incensed by how this outsider had violated and humiliated their sister.

The account goes on to say that Dinah’s family agreed to have her marry Shechem, on the condition that the pagan prince and the men of the city of Shechem respect their religious practice of male circumcision.

Verse 25 reveals: “In three days, when they [the men of Shechem] were still in pain, two of Jacob’s sons, Simeon and Levi, Dinah’s brothers, each took his sword and went to the unsuspecting city and slaughtered every male.”

Not only did Dinah’s brothers avenge her by killing every man, they thoroughly looted the city and “captured as plunder all their wealth, all their little ones, and their wives, including everything in the houses.”

Did Simeon and Levi go too far in their response to an outsider raping Dinah, as their father Jacob insisted (verse 30)? Some might be quick to side with the brothers. After all, the pagan Shechem and his father, Hamor, seemed to view the sexual assault as no big deal–while to Simeon and Levi, the criminal act was not only a complete violation of Dinah (“Should he treat our sister like a common prostitute?”) but also total disrespect of their religious way of life.

Perhaps Piper’s tweet reflects a defense of the brothers’ angry vengeance. However, any suggestion that pagan communities–and others outside the nascent Israelite faith community–didn’t also view Shechem’s act as a violation would be curious.

To imply that outsiders viewed the encounter as a “hookup” (a term of our present times, and not one from antiquity), implies that they viewed it as a consensual act.

Despite the status of women as mere property in ancient times, Shechem and his father clearly knew what he had done was wrong–thus their careful and excessive bargaining with Dinah’s family in their attempt to reconcile.

If the rapist knew that what he had done was wrong, then surely any astute observer–sinner or saved–would arrive at the same conclusion.

Unfortunately, the only viewpoint omitted from the biblical account is that of Dinah, who remains completely silent in the text.