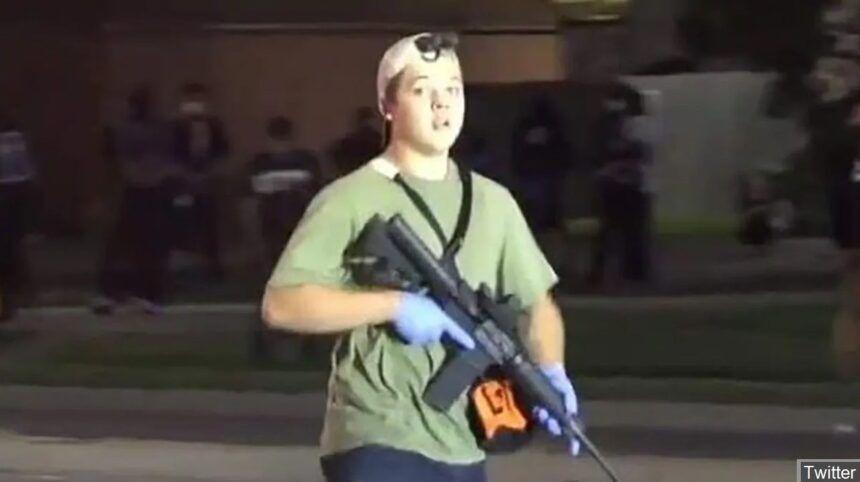 Kyle Rittenhouse appears in a video taken the night of August 25, 2020, in Kenosha, Wisconsin. (Screengrab via Twitter/WREX.com)

Kyle Rittenhouse, acquitted in November of all charges in the killing of two people and the injury of a third, has announced that he is among the lineup of controversial Republican and predominantly White guests for Talking Point USA’s “AmericaFest” taking place this month in Arizona.

“I am excited to announce that I will be attending AmFest with @TPUSA!” Rittenhouse, 18, tweeted Tuesday (December 14). He pointed Twitter followers to the event website, where his photo was featured alongside Jeanine Pirro, Donald Trump Jr., Candace Owens, Tucker Carlson, Sen. Ted Cruz, and other problematic politicians and talking heads. 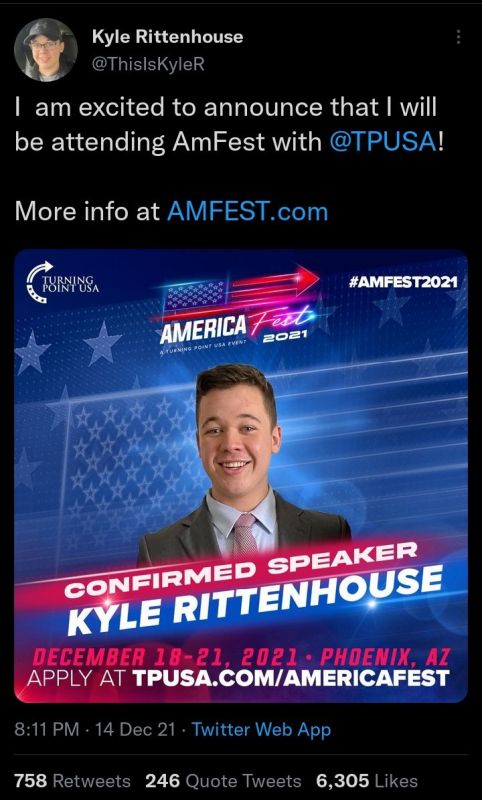 On November 19, a Wisconsin jury found Rittehouse not guilty of intentional homicide and other charges for fatally shooting Joseph Rosenbaum and Anthony Huber and wounding Gaige Grosskreutz during 2020 protests in Kenosha over the police shooting of Jacob Blake. Although prosecutors argued Rittenhouse provoked the shootings when he crossed state lines looking for confrontation and took possession of an AR-15-style semi-automatic rifle, the jury believed his questionable self-defense claim, while a sympathetic judge dismissed his other charges.

Related: Rittenhouse Verdict Flies in the Face of Legal Standards of Self-Defense

It is unclear what Rittenhouse will be doing at Turning Point USA’s AmericaFest 2021. While other guests had biographical information attached to their profiles on the event website, Rittenhouse’s profile page was empty, save for his photo and social media links, as of publication of this article.

Rittenhouse has proven popular not only among white supremacist groups like the Proud Boys, but among White Christians as well. They showed their support for the 18-year-old when they helped raised more than $629,000 for him through an online campaign hosted by GiveSendGo, the self-proclaimed “world’s #1 free Christian crowdfunding site.” A month after his trial, Rittenhouse was still receiving donations through the crowdfunding campaign. 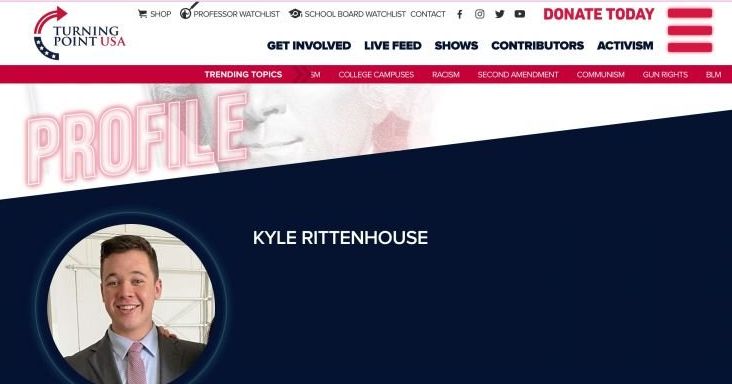 As observers such as Robert P. Jones, CEO and founder of the Public Religion Research Institute, speculated in the wake of the Rittenhouse verdict:

“Conservative magazine editors and book agents are undoubtedly circling around Rittenhouse. And the support he’s finding within hours of this verdict is an indication that we’ll see Rittenhouse — if not himself, then as an iconic hero — on the CPAC stage, conservative speaking circuit, or at the next Republican National Convention.”

Jones, author of White Too Long: The Legacy of White Supremacy in American Christianity, also noted a prediction by Dr. Anthea Butler.

“Guess who’s about to make a killing (pun intended) on the evangelical speaking circuit?” tweeted Butler, author of White Evangelical Racism, on the day of the jury’s “not guilty” judgment.

Organizers claim this year’s inaugural AmericaFest, held December 18-21, “is set to be the largest celebration of our constitutional rights and freedoms.” The event site touts guests such as Rep. Marjorie Taylor Greene (R-Ga.), James Lindsay (PhD Mathematics), and Sarah Palin as among “the best and brightest speakers in the country.”

Related: Dr. Anthea Butler on How ‘Racism Is Part and Parcel’ of White Evangelicalism

Turning Point USA, which targets younger conservatives, was founded in 2012 by Evangelical Christian Charlie Kirk and the late Bill Montgomery. Kirk advocated strongly for former President Donald Trump during his first term and re-election bid, going so far as to call the twice-impeached white nationalist “the bodyguard of Western civilization.”