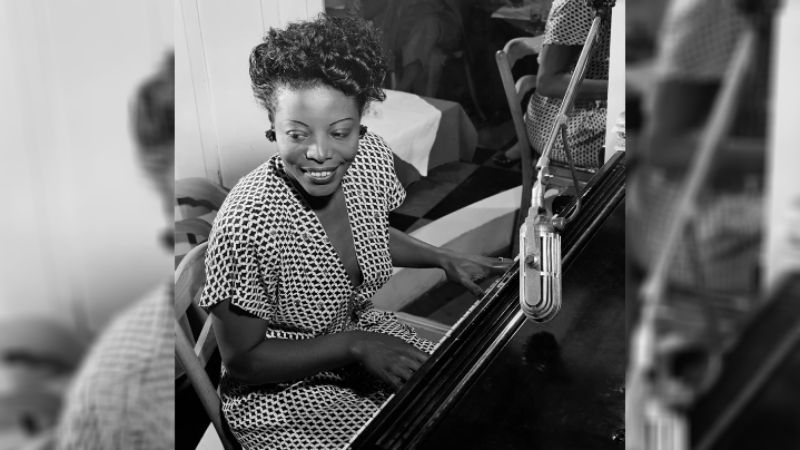 Its latest subject, Mary Lou Williams, is far lesser known — both as a legendary jazz pianist-composer and a devout Catholic.

Williams, who died in 1981, believed jazz was “healing to the soul” and found a welcome home among churchmen and religious sisters who were opening up to the gifts of contemporary culture as part of the reforms of the Second Vatican Council.

The slim volume was written by Deanna Witkowski, herself a jazz composer, pianist and interpreter of Williams’ work. Like Williams, Witkowski was also a Catholic convert and has written liturgical music, including jazz Masses.

Her subject, Williams, who was born in 1910, was a musical prodigy with perfect pitch. She supported her family by playing piano at private house parties from the time she was 7. By 15, she hit the road as a professional on the club circuit.

In her 20s, she wrote and arranged for Duke Ellington and Benny Goodman and later became a mentor to many others, including Thelonious Monk, Charlie Parker, Bud Powell and Dizzy Gillespie.

But she also gave up on music for a stretch and tried heroically to become a saint, feeding the hungry, giving up her possessions, helping other jazz greats with their addictions to heroin.

It was the Jesuit priests she befriended in the years after her baptism in 1957 who convinced her to see music as her main ministry.

Religion News Service spoke to Witkowski about her biography of Williams, titled “Mary Lou Williams: Music for the Soul,” and how the church — and artists themselves — could better appreciate their talents as spiritual gifts.

How did you come to admire Mary Lou Williams?

In 2000, Billy Taylor, an artistic adviser for jazz at the Kennedy Center, invited me to bring my quintet to play at the Mary Lou Williams Women in Jazz Festival. I accepted the invitation, but I realized I didn’t know any Mary Lou Williams music. I knew her reputation as a great, early big-band composer and a pioneering jazz pianist, but I didn’t know any of her works. So, I started educating myself. What struck me initially was that she had written three jazz Masses and I had just written my first jazz Mass for an Episcopal Church in New York. It was parallel to my own life. I started checking out her music and was amazed by the breadth of stylistic genres within jazz. She always sounded modern no matter what style of music she was playing.

Yes and no. She didn’t have formal piano teachers. But there were traveling musicians who came through Pittsburgh who showed her different things. She talks about a pianist named Jack Howard who taught her the importance of an important left hand because that’s where the feeling and beat was in jazz. When she toured with Andy Kirk and his Clouds of Joy for 12 years, from 1929-1942, she began hearing a lot of compositional ideas in her head and wanted to try them out. Andy Kirk worked with her to teach her musical notation.

She moved to Harlem in the 1940s while there are a lot of race riots and a growing heroin epidemic among musicians and other artists. How did she escape addiction herself?

Mary Lou was always someone who wanted to save other people. When she’s seeing her friends, Bud Powell or Charlie Parker, deal with addiction, she would invite them into her home in Harlem. She was working to get them off drugs. Her prescription was prayer and music. She would write music and get them to play it to get their minds off drugs. She was consumed with the idea that she needed to save other people. She also wanted to create community. She saw the drug use impairing the community around her and she wanted to do something about that. There are some recent articles that suggest she had an alcoholic breakdown (later when she lived) in Europe. She did not. She sometimes got lumped in with jazz musicians who had drug or alcohol addictions. She didn’t.

She anticipates jazz saxophonist Charlie Parker’s death and later begins to get these visions. It almost seems like a kind of breakdown or mental illness. Was it?

She had visions from when she was little. Mary Lou is not the only person who gets talked about as having extraordinary abilities. She was born with the placenta over her eyes. That was viewed in African American culture as having second sight. Her family believed that from the time she was born. She did see things other people didn’t see. I also think pioneering artists are people who see possibilities other people don’t see. But she had a lot of struggles throughout her life so there’s agitation there. But I never read anything that refers to her visions as mental illness.

Did she grow up with religion?

Church wasn’t a regular part of her growing up.

She was baptized in 1957 just before the Catholic Church began to open up to the world, and to jazz. Did she sense the church’s embrace of popular culture?

There were numerous priests pushing her to write a jazz Mass years before she wrote her first one in 1967. There’s a Paulist priest, Norman O’Connor, who was on the Newport Jazz Festival board, who encouraged her to write liturgical jazz. In 1963, there’s a letter she wrote to a Franciscan brother, Mario Hancock, and she says, “Why should I write a jazz Mass? Everyone’s already done it.” In the 1960s, record labels did more religious jazz labels. The priests asking her to write liturgical music knew about the reforms of the Second Vatican Council. But she wrote her first jazz Mass when she worked at a Catholic girl’s school and she found that the way she can teach music theory in a way the girls can respond is to write music for them.

Is her music appreciated today by the church?

I don’t think it’s known. She had an opportunity in 1968 to have her second Mass called “Mass for the Lenten Season” published. I couldn’t figure out what happened with that. But publishers have a huge influence on what music gets into circulation. If Mary Lou is not in there, how is the public going to know about that?

Do you see her being appreciated more posthumously?

There’s definitely been a renewal of interest in Mary Lou Williams in recent years. I have a record coming out of Mary Lou’s compositions, called “Force of Nature.” In 2020 the Grammys inducted Mary Lou’s 1945 trio recording, “The Zodiac Suite,” in its Hall of Fame. A couple of pianists have done new recordings and arrangements of that piece. Most jazz fans might know that work but they may not know much about her other music. Or maybe they know Alvin Ailey’s collaboration with Mary Lou Williams. But they might not know what the music sounds like. The main reason I wrote the book is so people put it down and seek out her music.