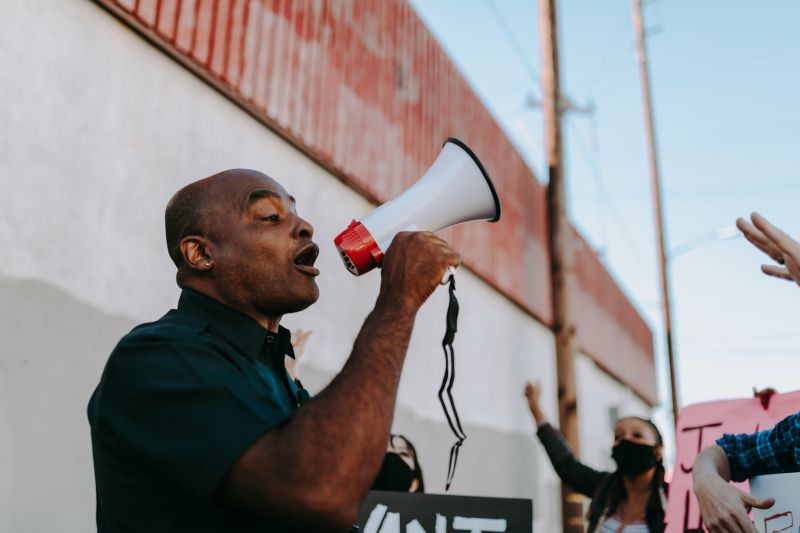 ATLANTA (RNS) — “I believe very strongly in my faith,” Republican Mississippi Governor Tate Reeves said at an August fundraising event. If you believe in eternal life, he explained to attendees, “you don’t have to be so scared of things.”

Reeves was speaking specifically about COVID-related health mandates, and he is not alone in his viewpoint. “Faith not Fear” is a mantra ringing out across the country, where such debates have reached a fever pitch. That is the case in Cobb County, Georgia.

“We no longer trust this Board to make decisions that have our children’s wellbeing and best interest at heart,” said an emotional Heather Garcia at an Aug. 19 school board meeting. Shortly after receiving quarantine notices, she pulled her two children out of the system. Other parents have reportedly done the same.

Located north of Atlanta, Cobb County is home to the second-largest school district in the state, with 111,854 students. In June 2021, Superintendent Chris Ragsdale announced his decision to remove the district’s mask mandate for the upcoming 2021-2022 school year. The change was announced prior to the arrival of the Delta variant, which has since changed the playing field.

Cobb County Schools is reporting 3,794 cases of COVID since July 1. Several schools have had to quarantine entire grades since school began Aug. 2.

The county itself is under a state of emergency, and WellStar Health Systems has implemented a code red for all its hospitals. Its biggest facility, Kennestone, has reportedly requested a temporary mobile morgue.

With this rising health crisis has come conflict. Should the district mandate masks? Many parents, like Garcia, say yes and have been demanding the board reinstate the previous masking policy. Others don’t agree, citing everything from politics to psychology.

And, for some, the argument is faith based, as Gov. Reeves suggested.

“We are truly in a spiritual battle. It is good versus evil,” said Caryn Sonderman at the August school board meeting. Sonderman is one of six parents who filed a lawsuit in April to end the old mask mandate. The group claimed, in part, that mandates are “scientifically baseless” and violate privacy laws. The lawsuit was rejected.

In her public comment, Sonderman said support for masking is fear based, “not science, facts, or logic.” She then quoted Isaiah 41:10 and asked, “Where is God in guiding our life choices?”

Sonderman is not alone in her opinion. Across social media platforms, local Cobb residents make the same “faith not fear” argument.

“We are wonderfully and beautifully made by God. We lose so much connotation when we put on a mask,” said Salleigh Grubbs, a longtime Cobb resident and chair of the Cobb County Republican Party.

Grubbs, who was not speaking officially for the party but for herself, is against mask mandates for many reasons, her religious faith being one. She added, “Faith leaders have let us down. They aren’t asking, ‘What would Jesus do?’ They aren’t there being vocal, because they don’t want to get political.”

And it is political. The Cobb County Republican Party has actively promoted the counter protests organized by the CCSD Parent Alliance, a parent-organized activist organization.

While the political aspects of the debate are undeniable, the faith-based argument doesn’t sit well with pro-mandate parents who also consider themselves religious.

Jennie Peterson, a devout Lutheran, was dismayed when she heard the faith-based argument from school board Chairman Randy Scamihorn, who said, “God has a plan,” after sharing his distrust of local and national health experts. Chairman Scamihorn did not respond to a request for comment.

“I’m paradoxically less at ease when someone who eschews the latest medical advice to combat a pandemic offers to me that I should ‘trust God,’” said Peterson. “Believing science doesn’t mean forgoing trust in God.”

While some faith leaders are shying away from weighing in due to politics, others are willingly sharing their thoughts.

Rabbi Larry Sernovitz told RNS: “The greatest Mitzvah (commandment) in Judaism is “pikuach nefesh,” saving a soul. It is all about life being sacred.” Rabbi Sernovitz is the senior Rabbi at Temple Kol Emeth and a Cobb parent.

“God has given us all the tools and reason at our disposal to do what it takes,” he said. “God depends on us to do the right thing.”

Temple Kol Emeth has a mask mandate and offers online access to all services.

“It greatly disturbs me that people of faith are not willing to make personal sacrifices for the sake of others. That is at the core of who we are called to be as Christians,” said Heiden.

Trey Phillips, director of youth ministries at St. Catherine’s Episcopal Church, agreed, explaining, “For people of faith especially, we must remember our charge to love God and neighbor with all our heart, soul and mind at this time.”

Phillips, who served as a chaplain in a COVID unit at Emory University Hospital, believes faith and science are siblings. “In Jesus Christ, we are given freedom. However, this freedom is always for our neighbors, not despite them,” he said.

St. Ann’s Catholic Church released a statement in support of mandates and other precautions. Father Ray Cadran described such steps as part of living a Christ-centered life, quoting Philippians 2:1-11. He also posted a video, titled “Love Thy Neighbor,” with the same message.

Not every house of worship takes the same position. Mt. Bethel Christian Academy, part of Mt. Bethel United Methodist Church, is mask optional. In a letter to parents, director Jim Cianca explained his decision, calling it difficult but correct.

“I know God will sustain us,” he said. Mt. Bethel did not respond to requests for comment.

While those churches supporting mask-optional policies may not be speaking out publicly as Grubbs suggests, they are expressing their position through their own community actions, as are those faith leaders supporting the mandates.

The Cobb County School District’s mask policy showdown has attracted national attention and has invited discord within a school board already deeply politically polarized. Not all of the seven board members support Ragsdale’s decision.

However, the district is under increasing pressure to reverse the policy. Most of Atlanta’s immediate metro counties have school mask mandates. Masks are also required in Marietta City Schools, an independent district located within Cobb County, and all the county’s government buildings require masks.

On Sept. 7, Cobb County Board of Health held an emergency meeting, voting in favor of school mask mandates. Superintendent Ragsdale, who sits on that board, abstained from voting. The Board of Health, however, does not set school district policy.

In response to pressure, the school board did revise its original June policy on masks. The health advisement now states masks are “strongly encouraged.”

That change, however, is still not enough for the many concerned parents whose faith in the school board, not God, is quickly running out.