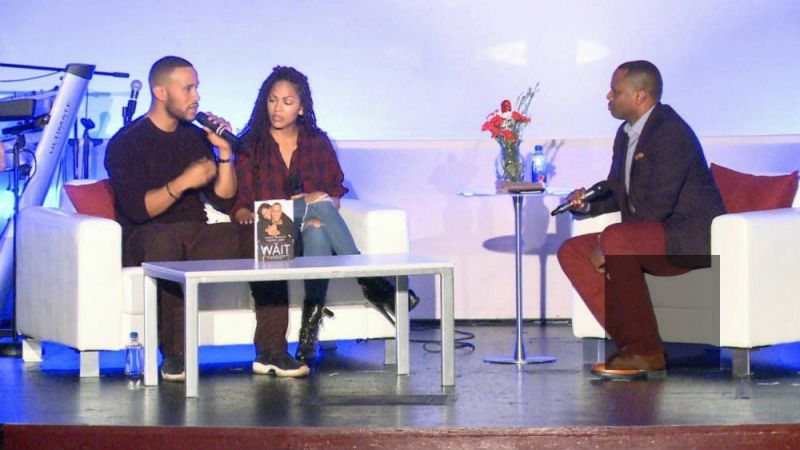 Franklin Defends Wife: ‘She’s Gonna Wear What She Wants to Wear in the Name of Jesus’

In “The Wait,” Hollywood couple DeVon Franklin and Meagan Good share how they practiced celibacy before and during their relationship, until they were married. Both are Christians, with Franklin ordained as a Seventh-day Adventist preacher. While Good appears on camera professionally, Franklin is senior vice president of production at Columbia (and also president and CEO of his own Franklin Entertainment).

Franklin and Good have been on a publicity tour for their book, “The Wait” and an audience member at their stop at One Church LA, where Franklin has preached on occasion, raised a question Good has had to address many times before.

The couple appeared on stage with Pastor Roberts (who is married to Sarah Jakes Roberts) to take questions about their book and offer any advice and encouragement about their celibacy journey.

One audience member, a woman who remained off-camera, complimented Good about her beauty, but then shared that she was taken aback by an image of the actress with her breasts exposed that she saw on a magazine cover.

The woman starts speaking at about 52:30 in the video.

“My question is this… You are beautiful. I’m gonna say something to you. … This is not offensive. It’s not offensive, but I was at a grocery store and I looked at (the) news stand and I saw you and you had your breasts showing. … So I wasn’t gonna come here, but the Lord brought me here to see you and you’re beautiful. You’re a beautiful young woman and your testimony is awesome. And the Lord let me come to push past the judgment. … This is real. Because you have to make sure that what you do and what you say match up,” the woman added.

She then concluded, “So we gonna cover up, right?”

As the video shows, there was some murmuring among the crowd as the woman began sharing her story, and at one point it seemed that whoever was interacting with the audience for questions was going to cut her off.

Franklin, however, insisted that it was OK and that the woman could finish speaking.

By the end of it, though, he was immediately at Good’s defense.

“Wait a minute… No, no, no… Uh-huh… That is not what we’re here for. She’s gonna wear what she wants to wear in the name of Jesus,” Franklin said.

“She has been as Christian as she has been when she wore whatever she wanted to wear,” he added. “We ain’t doing that.”

Franklin then kissed and embraced his wife, who appeared somewhat upset. As the video goes on, Good can be seen wiping the corner of her eyes.

Women in the audience also stood to their feet and cheered Good, saying, “We love you, Meagan.”

Eventually, Good picked up her microphone to respond to the woman.

“I could address what she said, and it’ll take me a while to address it because I have very specific feelings about that,” Good said. “But I just want to say to that young lady, however you feel, if that’s how you feel, pray for me, and I love you and God bless you, and thank you.”

Good has addressed the issue of her choice in style many times in the past. One occasion was the 2013 BET Awards, which she attended wearing a provocative blue dress.

“I’m not any less holy because [of] the dress I wore -I may not be who people think I should be -but I’m morphing into exactly who God wants me to be. My excuse is never ‘I’m going to do me’ and I don’t feel that I need to make an excuse or defend what I wore … I know I have a responsibility -and I’m working daily to fulfill the full potential of all God has created me to be,” Good wrote on social media after the awards show.

Good continued, according to BET.com, “A dialogue was started about my character, integrity, my walk with God and my Husband -simply based on a dress that I wore… Of course I’m going to have a reaction to people saying negative things… It’s just sad… Makes me sad not regretful… My heart and spirit is always open to whatever my Father would want to share with me… And my spirit tells me to be exactly who I authentically am -because that’s what’s going to reach who I was authentically designed to touch… people like me who are often misunderstood and told their cut of God’s promise -because they don’t look the role …when God doesn’t care about us ‘looking the role’…”

The couple’s book, fully titled “The Wait: A Powerful Practice for Finding the Love of Your Life and the Life You Love” (with contributor Tim Vandehey) is very popular on Amazon and, as Good pointed out online, has become a New York Times Bestseller.

Here’s a trailer for “The Wait” being explained by Franklin and Good: