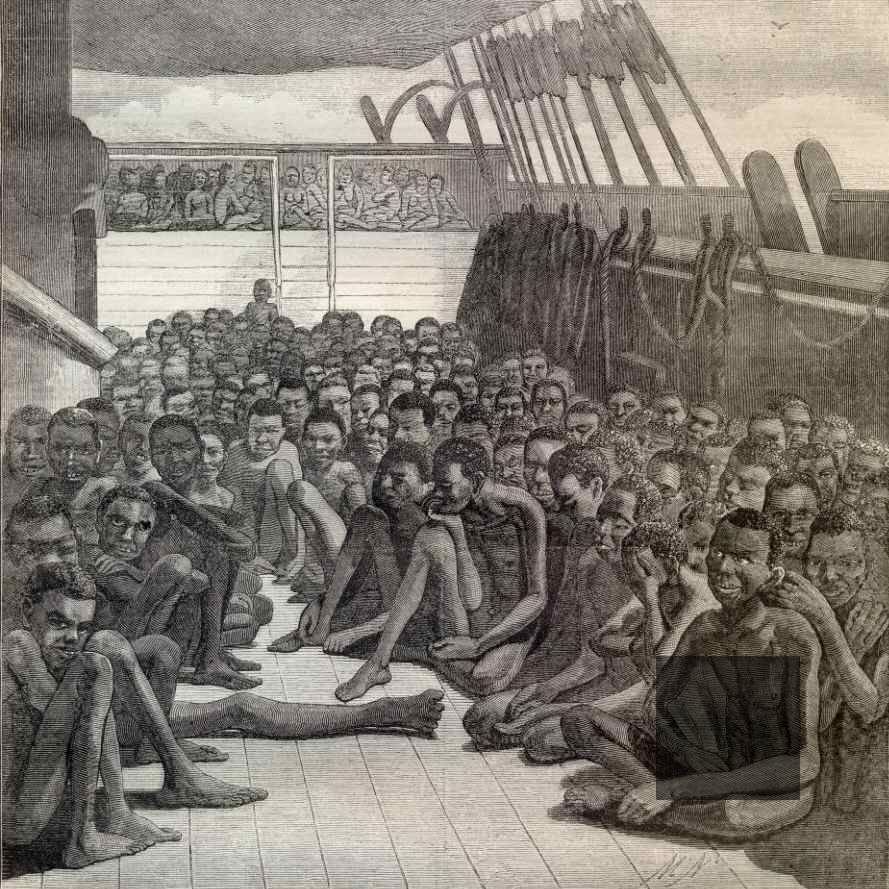 A group of scholars is calling for the Atlantic seabed to be internationally recognized as a memorial site for the millions of Africans who endured arduous voyages as human cargo during the transatlantic slave trade. The route, in which more than a million Africans died due to inhumane conditions, is referred to as the Middle Passage.

“From before the Spanish Conquest of Mexico in 1519 to after the end of the American Civil War in 1865, more than 12.5 million Africans were held captive on one of more than 40,000 voyages, each voyage averaging [about] 60 days,” reads the scholars’ article, published November 3, 20202, in Marine Policy journal.

“Conditions for Africans aboard slave vessels were inhumane, with most ships holding between 200 and 400 individuals in close and squalid quarters below deck. Confined spaces, inadequate nutrition, and limited opportunity for personal hygiene led to descriptions of the slave ships as a ‘marketplace’ for diseases…,” they add. “The ‘cargo’—enslaved Africans—experienced unimaginable terror and violence as sailors established authority through physical, emotional, and psychological conditioning. Illness, insanity, hunger, dehydration, torture, revolt, suicide, and ship wreck led to the death of [about] 1.8 million Africans at sea during their Middle Passage.”

The scholars, among them a representative of The Ocean Foundation in Washington, D.C., specifically call on the International Seabed Authority (ISA) to embrace the virtual memorial. The intergovernmental ISA, based in Kingston, Jamaica, is tasked with overseeing mineral-related activities in the world’s oceans “for the benefit of mankind as a whole.”

Underscoring the ISA’s responsibility “to protect objects of an archeological and historical nature” discovered in its jurisdiction, the scholars suggest religious and cultural artifacts bearing significance to the transatlantic slave trade could be buried beneath the Atlantic seabed. The transatlantic slave route included voyages originating mostly from western Africa to mostly parts of South America, although southeast Africa, Europe, and the United States were integral (as shown in the map below.

“We encourage Member States of the ISA to consider ways to respect and memorialize those who lost their lives and came to rest on the seabed in advance of mineral exploitation,” they write, insisting this can be done without negatively impacting “exploitation of mineral resources.”

Online memorials, such as slavevoyages.com, and the National Museum of African American History and Culture’s Slave Wrecks Project, already seek to “humanize the history of the global slave trade.” However, these scholars are calling on the intergovernmental authority overseeing oceanic exploration to add clear markings to its maps that delineate slave-trade routes along the northern and southern Atlantic Ocean.

A virtual memorial, in which ribbons on ISA maps would outline the leading routes of the transatlantic slave trade, could suffice in also honoring the stolen lives of Africans forced into the Middle Passage. The group suggests that such a Middle Passage memorial would fall in line with global calls for justice in the wake of George Floyd’s May 2020 death in police custody.

“The virtual memorial proposed…may serve as a reminder of past injustice and a contribution to the continuing pursuit of justice,” the scholars argue.

The scholars include Phillip J. Turner, Sophie Cannon, Sarah DeLand, James P. Delgado, David Eltis, Patrick N. Halpin, Michael I. Kanu, Charlotte S. Sussman, Ole Varmer, and Cindy L. Van Dover. They represent such institutions as Duke University and the U.K.’s University of Southampton and also the Republic of Sierra Leone Permanent Mission to the United Nations, among others. Their article, entitled “Memorializing the Middle Passage on the Atlantic seabed in Areas Beyond National Jurisdiction,” was made available online.

‘Queen Sugar’ and the Resilience of the Black Family