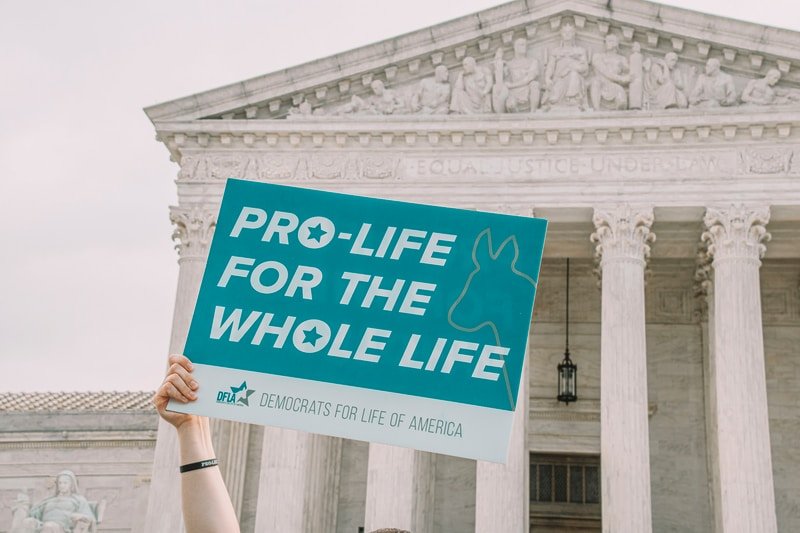 By Amanda Becker, The 19th

When the U.S. Supreme Court hears oral arguments on Wednesday in a case challenging Mississippi’s 15-week abortion ban, attorneys representing Jackson Women’s Health Organization are expected to argue that abortion access is an enshrined legal right in part because it is essential for gender equality.

But there’s a movement of self-described feminists who believe the opposite to be true.

In an amicus, or friend-of-the-court, brief filed in Dobbs v. Jackson Women’s Health Organization, 240 “women scholars and professionals, and pro-life feminist organizations” present the core tenet of what they call the “pro-life feminist movement”: If abortion is seen as a route to achieve gender equity, they argue, society has less incentive to support pregnancy and the raising of children, thus abortion has hindered, not helped, the cause.

Framing abortion access as essential for equality is an “imprimatur on a male normative experience of reproduction” and has “retarded meaningful accommodation of pregnancy and motherhood in the workplace and other spheres of society,” legal scholars Erika Bachiochi, Helen Alvaré and Teresa Stanton Collett write.

Bachiochi, who directs a project that aims to “support scholarly engagement in questions of sexual identity and freedom” at the Abigail Adams Institute, an independent organization that provides “humanistic” scholarship to the Harvard University community, said the brief’s aim was to show there is no evidence to support claims that abortion access has resulted in better economic outcomes for women. Instead, she said, it has actually justified not doing more to support pregnancy and families.

“We’re wanting more robust family accommodations in the workplace, and really, a market equality between men and women is how feminists talk about equality,” she said in an interview.

Support for abortion access has become the formal position of the Democratic Party and most groups advocating for gender equality. The National Organization for Women (NOW) says it “fully supports safe and legal abortion” as a component of “accessible reproductive health care” for women and LGBTQ+ people. The fifth annual Women’s March, held this year, focused on abortion rights after Texas passed its own restrictive law that is the subject of a separate Supreme Court case.

But abortion rights, mainstream feminism and political ideology have not always been so intertwined, according to Mary Ziegler, a legal historian at Florida State University. Ziegler has studied how disagreements over abortion fractured the women’s movement after the Supreme Court’s 1973 decision in Roe v. Wade, which established a constitutional right to abortion. Feminists who oppose abortion have always existed, “they just didn’t tend to be the people who got the microphone” either in the gender equality or anti-abortion movements, Ziegler said.

There are “different strands … of people who self identify as pro-life feminists,” Ziegler said. Some are professionally accomplished conservative women who embrace the feminist label even though it is generally associated with the progressive movement. Others are more liberal than typical abortion opponents and support issues such as contraception access and increased spending on social programs like health care and paid leave.

Self-identified feminists who oppose most or all abortions often straddle different worlds, completely at home neither in the broader conservative anti-abortion movement nor in liberal groups that believe feminism requires supporting abortion access and a commitment to Roe. Over the past 50 years, dozens of feminist organizations that oppose abortion have formed that aim to provide an ideological home.

Among the groups that signed the “pro-life feminist” amicus brief are Secular Pro-Life, a group led by atheist women — one politically conservative, one moderate, one liberal — that opposes elective abortion, supports contraception, and does not take an official position on abortion in cases of rape or incest. Another is Feminists for Nonviolent Choices, a “consistent life” organization that opposes abortion and capital punishment and advocates for better working conditions and fair housing. New Wave Feminists promotes nonviolence from “womb to tomb,” with a focus on immigration, racial justice, human trafficking, and pre- and post-natal care.

New Wave Feminists President Destiny Herndon-De La Rosa said the group started 15 years ago as a MySpace page and evolved into a national organization. Its members are “all over the place politically” and come from a variety of religious backgrounds, including atheism and agnosticism. The group doesn’t typically focus on the legality or illegality of abortion, but decided to sign onto the Dobbs brief because its framing made it a “vital part of the conversation” about abortion and gender equality, she said.

“We want to expose the fact that so many women don’t actually have a choice when it comes to making an abortion decision because of the systemic patriarchy that says to operate and succeed in a man’s world, your fertility will make you a liability,” Herndon-De La Rosa said.

Brief author Bachiochi supported abortion rights when she was a women’s studies student at a small liberal arts college in Vermont. She was left-leaning and volunteered for now-Sen. Bernie Sanders. But her thinking evolved as she earned a master’s in theology, then a law degree. She studied early suffragists such as Victoria Woodhull, who ran for president before women could vote and wrote in 1870 that it was “murder to destroy life in its embryonic condition.” The center Bachiochi now heads is named for Mary Wollstonecraft, a British philosopher in the 1700s who advocated for women’s rights and whose writings can be interpreted as opposing abortion.

“One thing they believed … is there is also a way in which abortion, especially readily available abortion, tilts the playing field further in the male direction” by not supporting women’s autonomy more broadly, Bachiochi said of some of the earliest women’s rights activists.

Co-authors Collett and Alvaré have more traditional politically conservative backgrounds. Collett directs the Prolife Center at St. Thomas University, a Catholic college in Minnesota, and gives regular talks about women’s equality via organizations such as the Federalist Society and the Heritage Foundation. Alvaré teaches family law at the conservative-leaning George Mason University and represented the U.S. Conference of Catholic Bishops on anti-abortion issues in the early 1990s. Both have opposed marriage equality.

Collett said that among anti-abortion feminists there is a “broad and deep consensus that families, particularly families experiencing pregnancy and raising young children, need a support network.” Alvaré said that women who identify as feminist but oppose abortion are “tired of being condescended to” by people who don’t understand how the two fit together.

The Supreme Court decided Roe based not on abortion’s impact on gender equality but on an implied right to privacy in multiple constitutional amendments. It upheld that right in its 5-4 decision in Casey v. Planned Parenthood in 1992, finding that “the ability of women to participate equally in the economic and social life of the Nation has been facilitated by their ability to control their reproductive lives.”

In 2007, when the court voted 5-4 to allow the Partial Birth Abortion Ban Act of 2003 to remain in effect, then-Justice Ruth Bader Ginsburg wrote in a dissent that “legal challenges to undue restrictions on abortion procedures do not seek to vindicate some generalized notion of privacy; rather, they center on a woman’s autonomy to determine her life’s course, and thus to enjoy equal citizenship stature.”

Ginsburg was a staunch supporter of abortion access but believed the legal right to end a pregnancy was best established by the Constitution’s promise of equal protection, not privacy. Ziegler predicted in 2013 that Ginsburg’s 2007 dissent could result in other liberals on the court being more willing to openly support equality-based abortion-rights claims — and that “pro-life feminists have promoted an important counterargument” worth examination. The dynamic is playing out in the Dobbs case.

Lawyers representing Jackson Women’s Health Organization said in their pre-trial brief that preserving abortion access is “critical to women’s equality” in part because they “may lose educational opportunities” and “face decreased opportunities to pursue their full career potential.” They could therefore be “more likely to experience economic insecurity,” the lawyers argue.

Bachiochi, Alvaré and Collett counter that “there are innumerable other factors that contributed to women’s social and economic equality, as well as evidence that abortion has actively harmed women and their progress.”

“These arguments tend, unwittingly perhaps, to promote the male childless norm in educational and employment settings,” they write.

They argue there is “simply no causal link between the availability of abortion the the ‘capacity of women to act in society,’” pointing to data showing how more women continued to enroll in college, participated in the workforce and ran for elected office even as abortion rates declined starting in the 1990s.

“The pro-life feminists brief in Dobbs is saying: ‘OK, even if you don’t like the privacy arguments that are the original basis for Roe, the equality arguments you’re getting from some people on the other side don’t work,” Ziegler told The 19th.

Editor’s note: This article was originally published by The 19th.