It didn’t take long for numerous Christian recording artists to voice support for gospel trailblazer Kirk Franklin’s public call-out of the Gospel Music Association’s and the Trinity Broadcasting Network’s need to “champion and protect diversity” with respect to the artists of color that keep these organizations in business.

In a short video published to his Facebook page and also on Instagram on Monday, Franklin said he had decided to boycott any events affiliated with the Dove Awards, GMA, and TBN after having conversations with representatives of these nonprofit organizations.

Artists such as Lecrae, Jonathan McReynolds, and Michelle Williams voiced support for Franklin taking a public stance against what he considers insensitivity toward Black artists and Christians of color by these organizations. Others such as preacher Priscilla Shirer and author Jefferson Bethke joined the chorus of those praising Franklin’s leadership. 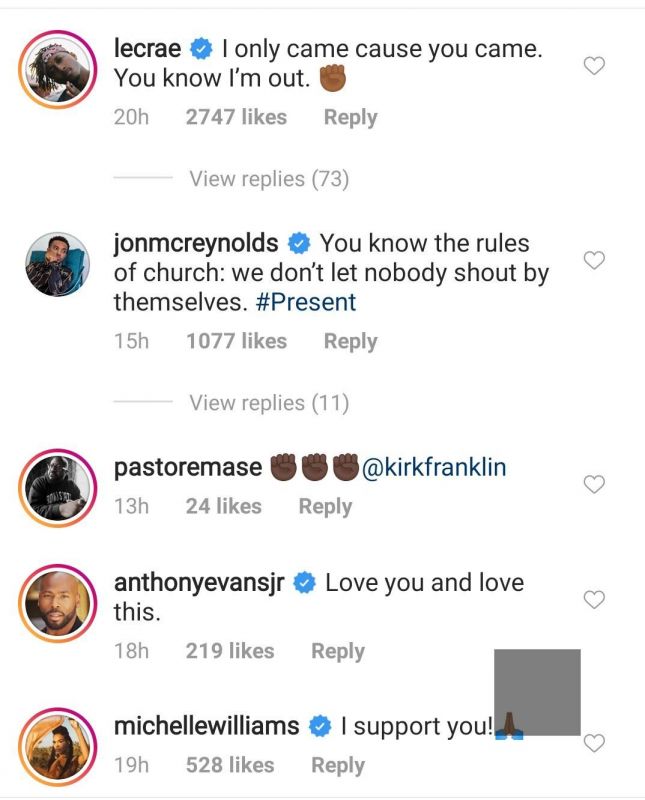 “This is powerful and a testament to how anyone with a platform — but especially someone who fears God — can use it to move us forward to justice, not just order,” activist Brittany Packnett wrote to Franklin on Instagram. “Many of us in the activism community who are also Christian are asked where those in our religious culture stand — because too many are silent. Thank you for speaking up with consistency and not letting silence win.”

The Dove Awards are a major fixture in the Christian music world going back to 1964 and is comparable to the Grammy Awards. GMA produces the annual Dove Awards program, which it first launched in 1969. TBN, founded 46 years ago by the late Paul and Jan Crouch, is a major Christian television broadcaster with presence in numerous countries around the world.

The Gospel Music Association said in a statement released after Franklin’s video remarks that its board is working on “solutions” that will be revealed in the future. So far, TBN representatives have not made any public statements.

His private meetings with reps from these groups apparently did not go well in Franklin’s estimation, as the influential recording artist opened his video remarks by stating: “Today, I feel like quitting.”

“I am heartbroken that I even have to share this with you,” he added.

Franklin went on to explain that when he won a Dove Award in 2016, he made remarks and called for prayer in relation to the killing of Philando Castile at the hands of a police officer during his acceptance speech. When the Dove Awards later aired on TBN, his remarks were edited out for the broadcast. The same thing happened this year when Franklin mentioned the killing of Atatiana Jefferson by a police officer and called for prayer for all involved during his acceptance speech.

The Gospel Music Association insisted that Franklin’s remarks were cut for the broadcast because the Dove Awards was limited to a strict two-hour running time.

“Although completely unintentional, we understand it caused great harm and deeply wounded many in the African American and Gospel community. As well, it left a general perception that we are not concerned with key social issues that affect people of color,” the statement read. “It is not our intent to disregard or silence any of our artists, and we are deeply saddened by this perception and are committed to change this.” The GMA statement was signed by the president and executive director Jackie Patillo.

Franklin’s influence — in the Christian and secular music industries — is without question.

The 49-year-old artist most recently released his 13th studio album, “Long Live Love.” The album debuted in May and made the 49-year-old Christian singer “the first artist to simultaneously top all five Billboard gospel charts.”

As Faithfully Magazine previously reported in an article about Franklin’s future biopic:

Franklin rocked the gospel music industry with his 1993 hip-hop friendly debut “Kirk Franklin & The Family.” He was also the first gospel artist to have a music video put in heavy rotation on MTV, with 1997’s “Stomp.”

Throughout his career Franklin has collected numerous awards, published a book, and collaborated with artists of various genres, including Chance The Rapper, Kanye West, TobyMac, Bono of U2, and many others. Franklin currently hosts BET’s “Sunday Best” and reportedly remains the biggest-selling gospel artist in SoundScan history.

Franklin Calls Out GMA, Dove Awards, and TBN on Diversity: