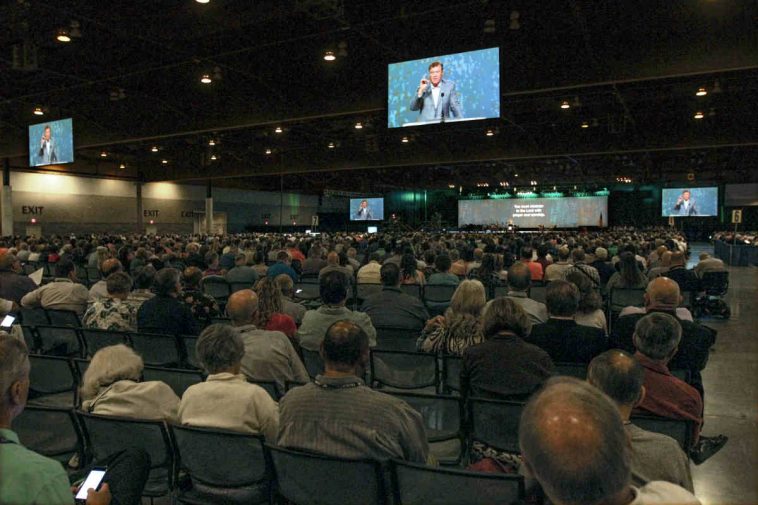 In an usual move at its annual gathering in Phoenix Tuesday night, the Southern Baptist Convention voted to allow a Resolutions Committee to reconsider its refusal to release a statement explicitly condemning the racist alt-right movement and white supremacy submitted by one of its Black pastors.

The vote to give the Resolutions Committee additional time to re-consider the Rev. William Dwight McKissic, Sr.’s submitted proposal, originally titled “On the Condemnation of the ‘Alt-Right’ Movement and the Roots of White Supremacy,” came as the final order of business on the first full day of the gathering. Just hours earlier, the resolution had been declined, to the disappointment of observers and some SBC members.

“Dear folks, some things have been happening over the course of the last three hours that have substantially changed our parliamentary situation regarding the Resolutions Committee report,” Barry McCarty, the SBC’s Chief Parliamentarian, said from the stage.

McCarty, who was ironically captured in an racially offensive photo just weeks ago, explained that the Resolutions Committee made a decision on its own to reconsider McKissic’s alt-right, white supremacy proposal. The change of mind was possibly inspired by expressions of grief by some SBC members, particularly African Americans.

SBC President Steven Gaines took the vote Tuesday night, with members (or messengers) overwhelmingly affirming their approval to allow the Resolutions Committee to report out an apparent revised version of the “anti-gospel alt-right white supremacy movement” resolution on Wednesday, the final day of the annual meeting.

There were a handful of members in the meeting hall who voted against the committee’s request.

Gaines, for his part, was ecstatic that the request had been approved.

“Praise the Living God,” the SBC president declared after announcing that there were enough affirmative votes granting the Resolutions Committee’s request.

Gaines revealed at the start of his remarks that there had been 588 votes (57.53 percent) in favor of and 429 (41.98 percent) against McKissic’s original resolution when it was brought up earlier in the day. Resolutions need at least a two-thirds majority vote for approval.

Listen to Gaines take the vote Tuesday night via the audio player below. [The livestream of his remarks were temporarily interrupted, which is noticeable at about 50 seconds into the clip]

“Messenger Dwight McKissic of Texas argued consideration and adoption of the resolution would uphold civic righteousness and promote racial justice,” the Baptist Press wrote of the original vote in its live blog on the day’s meetings.

It added that Resolutions Committee chairman Barrett Duke had revealed that “inappropriate” language kept the alt-right condemnation from being adopted as an “official SBC statement.” The Associated Press reported that “some Southern Baptists defended the outcome in part by pointing to their repeated condemnations of racism over the years.”

The SBC, which claims more than 15 million members, describes a resolution on its annual meeting website as “an expression of opinion or concern, as compared to a motion, which calls for action.”

“A resolution is not used to direct an entity of the Southern Baptist Convention to specific action other than to communicate the opinion or concern expressed,” it adds.

McKissic had publicly shared drafts of his resolution on his blog and on social media in May, with one version published on SBCVoices.com.

The Cornerstone Baptist Church pastor asked his fellow Baptists to denounce “every form of ‘nationalism’ that violates the biblical teachings with respect to race, justice, and ordered liberty” and “reject the retrograde ideologies, xenophobic biases, and racial bigotries of the so-called ‘Alt-Right’ that seek to subvert our government, destabilize society, and infect our political system.”

McKissic, a former Southwestern Baptist Theological Seminary trustee, added as his final point: “that we earnestly pray, both for those who lead and advocate this movement and those who are thereby deceived, that they may see their error through the light of the Gospel, repent of their perverse nationalism, and come to know the peace and love of Christ through redeemed fellowship in the Kingdom of God, which is established from every nation, tribe, people and tongue.”

The alt-right movement has been described as a hodgepodge of predominantly angry, White millennial males disaffected with the traditional Republican party and paranoid about “White genocide.” At the movement’s center is the belief that the United States is a White nation meant for those of European decent. Some of its Christian-identified members claim White ethno-nationalism is biblical.

The movement received extensive media attention after it was concluded that its members had a hand in securing President Donald Trump’s election. Individuals claiming affiliation with the racist movement have spoken on college campuses, held demonstrations and, in some cases, carried out violent attacks against perceived religious minorities and people of color.

Controversy over the SBC’s refusal to adopt the timely resolution overshadowed some notable gains the predominantly-White denomination made during the first day of the annual meeting and at its Pastors Conference held a day prior.

The SBC, founded in 1845 specifically to allow slaveholders to serve as missionaries, has issued various resolutions over the years repenting of its racist stance against Blacks and other minorities. Among those resolutions were one on racial reconciliation in 1995 and a 2016 resolution titled “On Sensitivity And Unity Regarding The Confederate Battle Flag,” addressing the display of Confederate flags in churches.

Here are how some Christians, Baptists and those of other traditions, responded to the initial news that McKissic’s resolution condemning the alt-right movement and white supremacy had been denied.

White supremacy ain't takin' no losses. #SBC17 didn't have the will to denounce white supremacy. That's deep. How do the black members feel? https://t.co/Z3MCX06PUX

The decision made at #SBC17 to not denounce white supremacy is hurtful.

Any "church" that cannot denounce white supremacy without hesitancy and equivocation is a dead, Jesus denying assembly. No 2 ways about it.

I’m Presbyterian, not Southern Baptist, but I see what happened w/ the resolution denouncing the alt-right, and I empathize. #SBC17

Far too many white Christians want the fruit of racial reconciliation without the actual labor of unmasking, naming, and eradicating racism.