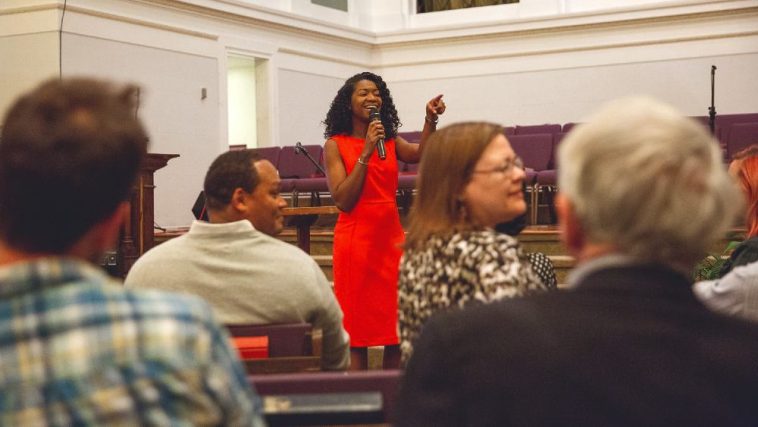 People of different ethnicities hold hands in a mural that hangs beneath the sign of First Grace United Methodist Church of New Orleans, Louisiana. The church is one of 150 locations in the United States and around the world that hosted Q Commons on a Thursday evening in October 2017. Twenty-five thousand people participated in the event via livestreams in homes, schools, and churches and on university campuses. The theme of the two-hour simulcast event, held on the 27th, was “Healing Our Divided Nation.”

Q Commons is hosted every year by Q Ideas, an organization founded by bestselling author Gabe Lyons. The “Q” stands for “questions,” and Q Ideas encourages Christians to think well and ask questions in order to “renew and restore cultures,” according to its website.

“These environments are to feel a lot like a modern-day town hall, where we’re learning together, but we’re also talking,” Lyons said in the opening moments of Q Commons. “I invite you to meet the people around you. Build relation-ships.”

Kahlida Lloyd, the host for Q Commons at First Grace United Methodist Church, knew she wanted to host the event in New Orleans when she first learned of the topic. Lloyd had moved from Washington, D.C., to New Orleans only three months prior to launch a nonprofit called Mission Reconcile. The organization’s goal is to bring together racially-homogeneous churches to discuss race and racism, build relationships, and put newly-acquired knowledge into action.

A quick glance at social media reveals just how deeply divided White Christians and Christians of color are on issues such as police brutality, the removal of Confederate statues, and NFL players’ kneeling protests during the national anthem.

For Lloyd, Q Commons seemed like the perfect catalyst to begin these conversations and introduce Mission Reconcile in her community. 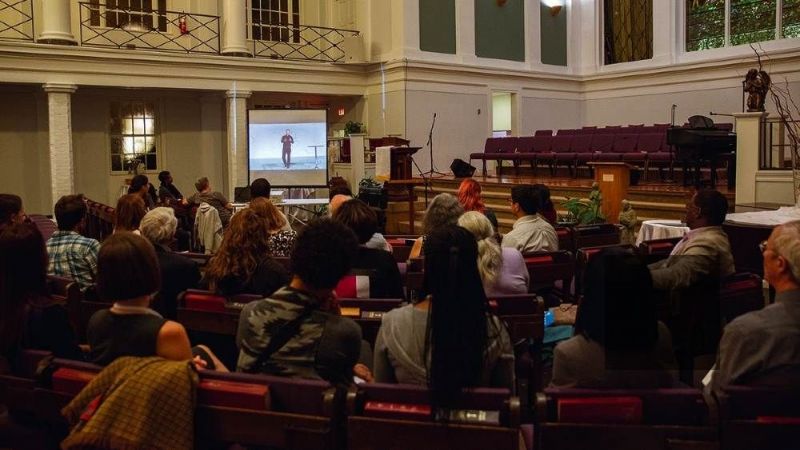 On October 21, 2007—two years after Hurricane Katrina devastated the city—a predominately White church and a predominantly Black church divided geographically by only a mile decided to merge and become one church under Anglim’s leadership.

“[C]atastrophes can turn into catalysts,” Anglim said of the historic devastation caused by Katrina.

“I have a suggestion for the nation,” he added. “Every time there is a catastrophe [somewhere]… somebody needs to go there because I know, in that moment, there are 50 Brown and Black people and at least 40 White people that want to start a new body, and they will in the midst of that moment because I know, in these moments, we feel our common connection. That common connection is what heals us when we give ourselves to it.”

Despite espousing a culture that prioritizes and capitalizes on independence and personal freedom, this common connection is necessary to heal a fractured America, according to Brooks, the New York Times columnist who spoke during the simulcast.

“What I’ve concluded that you have to do is sort of rebel against society,” Brooks said. “If the world says to you, ‘Celebrate your autonomy,’ you say, ‘No, I’m going to celebrate relationship…’ When the world says to you that society’s a contract where we do everything for ourselves, you say, ‘No, society is a covenant where you and I join together to create a third thing.’ You don’t create a covenant because of your self-interest; you create a covenant to change your identity, to become a different person.”

One of the goals for Q Commons is for people to enter into this “covenant” in their communities as they learn from local leaders pursuing unity. In a world where there is a lot of online activism, Q Commons encourages people to shift their gaze from their screens to people around them.

Kara Powell, author of Right Click: Parenting Your Teenager in a Digital World, addressed the pros and cons of online connections and implored the audience to ask a new question before they pick up their smart-phones.

“Jesus crams hundreds of commands into one central great commandment: ‘Love God. Love neighbor. Love yourself,’” Powell said. “Instead of asking [if] technology help[s] us feel better, let’s come up with a new question: does technology help us love better? Technology becomes a problem when it interferes with the verb that Jesus elevates above all others.”

The Complexity of Community

Technology has its advantages, one of which is connecting people who are very different. A downside, however, is when technology makes very complex people appear simple or one-sided—a factor that makes healing in a divided nation difficult, according to Propaganda.

Such boxes are those that Lyons and others at Q Commons hope people get beyond as a result of the event, although this is no easy task.

“Q gave me an opportunity to see how this concept [of Mission Reconcile] would play out in New Orleans for me,” Lloyd said. “It brought together a diverse group. That was important to me. I was appreciative of how many people wanted to do more as a result of what was being said.”

Anglim also recognizes that healing a divided nation is easier said than done, and he mentioned the hardships involved in bringing two very different churches together following Hurricane Katrina.

Overcoming division looks differently in different communities; it might not always look like two churches merging together. However, the question Anglim posed after Katrina is perhaps a question that Christians across the world are asking following Q Commons:

“Do you think we can do more for our city as one body in Christ … than we could ever do as two bodies in Christ one long mile apart?”