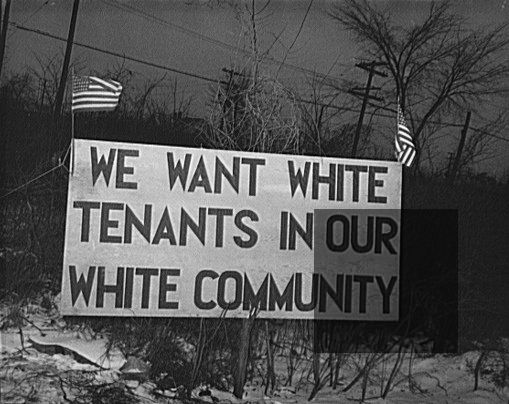 White tenants erect a sign to prevent Blacks from moving into a housing project in Detroit in 1942. (Photo: Wikimedia Commons)

Conversations about wealth inequality in the United States inevitably circle back to the question of race: why does wealth disproportionately reside among Whites in comparison to Blacks? As the U.S. Federal Reserve’s study on wealth-holding by race and ethnicity found, “The long-standing and substantial wealth disparities between families of different racial and ethnic groups… have changed little in the past few years.” Indeed, the study found that the difference of the median net worth between Whites and Blacks increased from $132,800 to $153,500 between 2013 and 2016.

While many may be already familiar with how slavery, Jim Crow, and redlining placed Blacks at a considerably late and disenfranchised start for accruing wealth, very few may be familiar with another dark moment in our country’s past—racially restrictive covenants.

This is especially true for people who have no connections to the racialized history of the South and who have bought into the myth that non-Southern regions of the country aren’t stained with a racist past. As a California native myself, very rarely do I find other Californians who are familiar with the widespread practice of racially restrictive covenants in our home state. It’s often assumed that a racially diverse state like California must not have had such a scarred past.

But the matter of fact is that as non-Whites—including Blacks, Asians, and Mexicans—sought to settle in Southern California from the early to mid-20th century, many Whites established racially restrictive covenants to bar non-Whites from owning or leasing property near them. Many newly-minted suburbs quickly had homeowners’ covenants with racially restrictive language such as:

“…no lot in said tract shall at any time be lived upon by a person whose blood is not entirely that of the Caucasian Race, and for the purpose of this paragraph, no Japanese, Chinese, Mexican, Hindu, or any person of the Ethiopian, Indian, or Mongolian Races shall be deemed to be Caucasian, but if persons not of the Caucasian race be kept thereon by a Caucasian occupant strictly in the capacity of servants or employees of such occupant, such circumstances shall not constitute a violation of this condition.”

[bs-quote quote=”Blacks across the board have not truly had a fair shot at accruing wealth through housing until, at the earliest, 1968. Exacerbating the matter even further, Blacks have not had a chance to generationally accrue wealth and property through parents and grandparents.” style=”style-17″ align=”center”][/bs-quote]

Sam Gallagher, president of the Cape St. Claire Improvement Association in Maryland, has worked on trying to get racially restrictive language removed from homeowners’ covenants. While 85 percent of owners give their consent, several home and lot owners have opted to keep the language, arguing that it is “a part of the community’s history and worth preserving.”

Until the Fair Housing Act, Blacks were often left with no choice but to opt for less than ideal housing situations. Add to that the fact that it was only in 1964 that racial discrimination in the workplace and hiring practices were deemed illegal by Title VII of the Civil Rights Act. This would have meant that Blacks not only were barred from owning homes, but also barred from certain employment due to the color of their skin.

All of this is especially important because one of the highest factors in calculating net worth is housing assets. Net worth is simply an individual’s liabilities (such as debts) subtracted from their assets. The mere fact of owning a home sets someone at a much higher possibility of having a higher net worth. Blacks across the board have not truly had a fair shot at accruing wealth through housing until, at the earliest, 1968. Exacerbating the matter even further, Blacks have not had a chance to generationally accrue wealth and property through parents and grandparents. Even in the event that they do, the amount passed on from generation to generation pales in comparison to the amount Whites are able to pass on. As Janelle Jones from the Economic Policy Institute found:

“More than half of white families end up with more wealth than their parents, while only 23 percent of blacks are able to do the same…. White families are twice as likely to receive an inheritance as black families, and that inheritance is nearly three times as much.”

Ultimately, racially restrictive covenants—like slavery, Jim Crow, and redlining— cast a long, foreboding shadow through the present. Wealth inequality is not a recent phenomenon needing only a quick fix, but something that continues to exist because of a long-standing history of multifaceted, compiled, and systemic racism in our country.