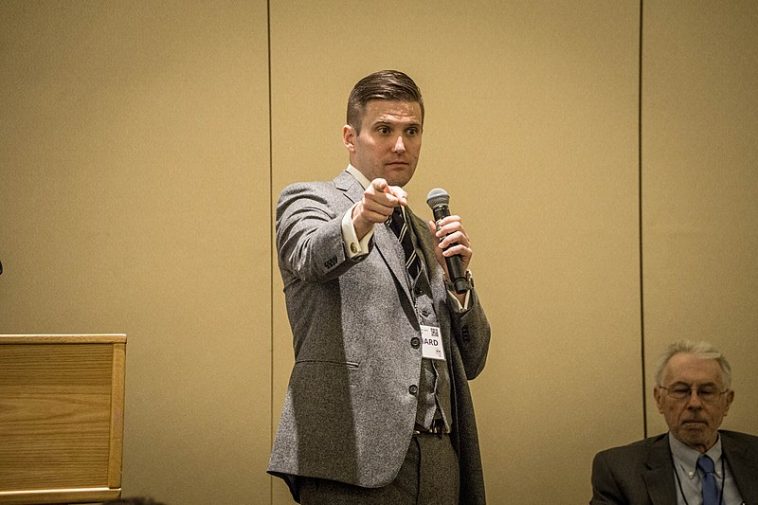 Photo by Wikimedia Commons
ShareTweetPin It

Richard Spencer, a white supremacist leader who has been outspoken about reclaiming America as an ethnically European country through “peaceful ethnic cleansing,” will be delivering a speech at the University of Florida in Gainesville Thursday.

A leader of the alt-right movement, Spencer has been heavily involved in white supremacist demonstrations. The “alt-right” or “alternative right” is a name embraced by some white supremacists and white nationalists to refer to themselves and their ideology, which emphasizes preserving and protecting the White race in the U.S. Spencer led the “Take-Back Lee Park” rally in Charlottesville, Virginia, in May, a protest against the city’s plans to remove the statue of Confederate General Robert E. Lee. Most recently, Spencer also led torch-bearing white supremacists at a demonstration that took place in August at the University of Virginia campus in Charlottesville.

Violence has often been the result of protests and demonstrations led by Spencer and other white supremacist leaders. Casualties have included Heather Heyer, who was killed by a car driven by James Fields Jr. Fields was later charged with second-degree murder, aggravated malicious wounding and failure to stop following an accident resulting in death.

Spencer’s visit to the University of Florida will be his first college campus visit since August. Although he was initially denied the ability to hold an event at the University of Florida campus after the events in August, Spencer’s supporters and a lawyer contested the decision on grounds of the First Amendment. The school subsequently allowed Spencer to schedule the event on their campus.

Officials in the state of Florida are concerned that the event may result in violence. On Monday, Florida Gov. Rick Scott declared a state of emergency for the county where the university is located and issued an executive order.

Commenting on the increase of police presence on campus, University of Florida President W. Kent Fuchs told CNN, “It’s not going to feel like a research university for 50,000 students, and the whole purpose of that is to keep people safe.”

For the record, I don't stand behind racist Richard Spencer. I stand with those who reject and condemn Spencer’s vile and despicable message https://t.co/eHFuUUchbh

Vincent Adejumo, a lecturer in African-American studies, commented to USA Today: “The students are scared, especially our students who are from minority communities.”

According to the Washington Post, university officials intend to spend $500,000 on security for the event. In response to news about Gov. Scott’s executive order and the increase of security on the University of Florida campus, Spencer replied to the Washington Post: “I’m going to play ball… My people are in constant contact with security. We’re moving forward in good faith.”

The University of Florida community has been bracing for the event and its potential fallout. Protesters have been on or near the campus holding signs against racism ahead of the event. A Florida brewery is even offering free beer to anyone who boycotts Spencer’s speech. The hopes and prayers of many in the community is that no further violence will result from the event.