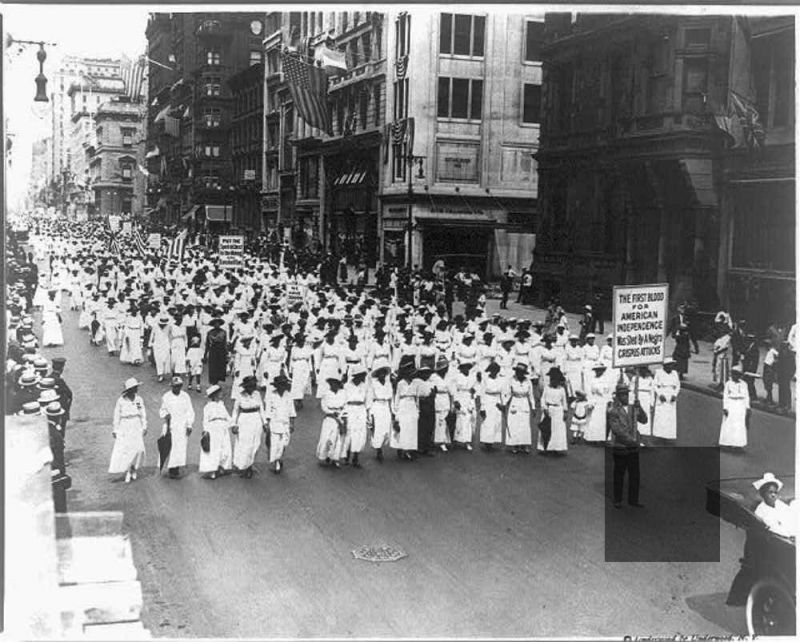 The only sounds were those of muffled drums, the shuffling of feet and the gentle sobs of some of the estimated 20,000 onlookers. The women and children wore all white. The men dressed in black.

On the afternoon of Saturday, July 28, 1917, nearly 10,000 African-Americans marched down Fifth Avenue, in silence, to protest racial violence and white supremacy in the United States.

New York City, and the nation, had never before witnessed such a remarkable scene.

The “Silent Protest Parade,” as it came to be known, was the first mass African-American demonstration of its kind and marked a watershed moment in the history of the civil rights movement. As I have written in my book “Torchbearers of Democracy,” African-Americans during the World War I era challenged racism both abroad and at home. In taking to the streets to dramatize the brutal treatment of black people, the participants of the “Silent Protest Parade” indicted the United States as an unjust nation.

One hundred years later, as black people continue to insist that “Black Lives Matter,” the “Silent Protest Parade” offers a vivid reminder about the power of courageous leadership, grassroots mobilization, direct action and their collective necessity in the fight to end racial oppression in our current troubled times.

Prior to the “Silent Protest Parade,” mob violence and the lynching of African-Americans had grown even more gruesome. In Waco, a mob of 10,000 white Texans attended the May 15, 1916, lynching of a black farmer, Jesse Washington. One year later, on May 22, 1917, a black woodcutter, Ell Persons, died at the hands of over 5,000 vengeance-seeking whites in Memphis. Both men were burned and mutilated, their charred body parts distributed and displayed as souvenirs.

Even by these grisly standards, East St. Louis later that same summer was shocking. Simmering labor tensions between white and black workers exploded on the evening of July 2, 1917.

For 24 hours, white mobs indiscriminately stabbed, shot and lynched anyone with black skin. Men, women, children, the elderly, the disabled – no one was spared. Homes were torched and occupants shot down as they attempted to flee. White militia men stood idly by as the carnage unfolded. Some actively participated. The death toll likely ran as high as 200 people.

The devastation of East St. Louis was compounded by the fact that America was at war. On April 2, President Woodrow Wilson had thrown the United States into the maelstrom of World War I. He did so by asserting America’s singularly unique place on the global stage and his goal to make the world “safe for democracy.” In the eyes of black people, East St. Louis exposed the hypocrisy of Wilson’s vision and America itself.

The National Association for the Advancement of Colored People quickly responded to the massacre. Founded in 1909, the NAACP had yet to establish itself as a truly representative organization for African-Americans across the country. With the exception of W.E.B. Du Bois, one of the NAACP’s co-founders and editor of The Crisis magazine, the national leadership was all white. Branches were overwhelmingly located in the North, despite the majority of African-Americans residing below the Mason-Dixon line. As a result, the NAACP had largely failed to respond with a sense of urgency to the everyday horrors endured by the masses of black folk.

James Weldon Johnson changed things. Lawyer, diplomat, novelist, poet and songwriter, Johnson was a true African-American renaissance man. In 1916, Johnson joined the NAACP as a field secretary and made an immediate impact. In addition to growing the organization’s southern membership, Johnson recognized the importance of expanding the influence of the NAACP’s existing branches beyond the black elite.

Johnson raised the idea of a silent protest march at an executive committee meeting of the NAACP Harlem branch shortly after the East St. Louis riot. Johnson also insisted that the protest include the city’s entire black community. Planning quickly got underway, spearheaded by Johnson and local black clergymen.

By noon on July 28, several thousand African-Americans had begun to assemble at 59th Street. Crowds gathered along Fifth Avenue. Anxious New York City police officers lined the streets, aware of what was about to take place but, with clubs at the ready, prepared for trouble.

At approximately 1 p.m., the protest parade commenced. Four men carrying drums began to slowly, solemnly play. A group of black clergymen and NAACP officials made up the front line. W.E.B. Du Bois, who had recently returned from conducting an NAACP investigation in East St. Louis, and James Weldon Johnson marched side by side.

The parade was a stunning spectacle. At the front, women and children wearing all-white gowns symbolized the innocence of African-Americans in the face of the nation’s guilt. The men, bringing up the rear and dressed in dark suits, conveyed both a mournful dignity and stern determination to stand up for their rights as citizens.

They carried signs and banners shaming America for its treatment of black people. Some read, “Your hands are full of blood,” “Thou Shalt Not Kill,” “Mothers, do lynchers go to heaven?” Others highlighted the wartime context and the hollowness of America’s ideals: “We have fought for the liberty of white Americans in six wars; our reward was East St. Louis,” “Patriotism and loyalty presuppose protection and liberty,” “Make America safe for Democracy.”

Throughout the parade, the marchers remained silent. The New York Times described the protest as “one of the most quiet and orderly demonstrations ever witnessed.” The silence was finally broken with cheers when the parade concluded at Madison Square.

Legacy of the Silent Protest Parade

The “Silent Protest Parade” marked the beginning of a new epoch in the long black freedom struggle. While adhering to a certain politics of respectability, a strategy employed by African-Americans that focused on countering racist stereotypes through dignified appearance and behavior, the protest, within its context, constituted a radical claiming of the public sphere and a powerful affirmation of black humanity. It declared that a “New Negro” had arrived and launched a black public protest tradition that would be seen in the parades of the Universal Negro Improvement Association, the civil rights demonstrations of the 1960s and the Black Lives Matter marches of today.

The “Silent Protest Parade” reminds us that the fight against racist violence and the killing of black people remains just as relevant now as it did 100 years ago. Black death, whether at the hands of a Baton Rouge police officer or white supremacist in Charleston, is a specter that continues to haunt this nation. The expendability of black bodies is American tradition, and history speaks to the long endurance of this violent legacy.

Ida B. Wells, James Weldon Johnson and other freedom fighters of their generation should serve as models for activists today. That the “Silent Protest Parade” attracted black people from all walks of life and backgrounds attests to the need for organizations like the NAACP, following its recent national convention, to remember and embrace its origins. And, in building and sustaining the current movement, we can take lessons from past struggles and work strategically and creatively to apply them to the present.

Because, at their core, the demands of black people in 2017 remain the same as one of the signs raised to the sky on that July afternoon in 1917:

“Give me a chance to live.”