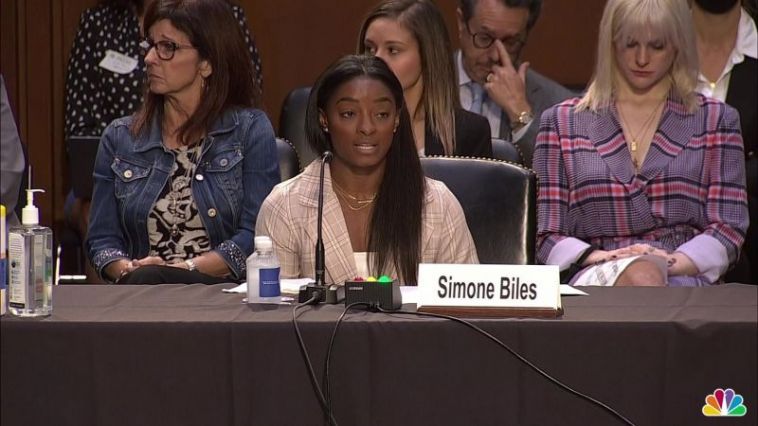 American gymnast and Olympian McKayla Maroney condemned the FBI on Wednesday for failing to act on her reports of sexual abuse against former USA gymnastics national team doctor Larry Nassar in the summer of 2015.

“Not only did the FBI not report my abuse, but when they eventually documented my report 17 months later, they made entirely false claims about what I said,” Maroney told members of the Senate Judiciary Committee.

Maroney appeared before the committee alongside fellow gymnasts and survivors Simone Biles, Maggie Nichols and Aly Raisman during a hearing to examine how the FBI handled its investigation of Nassar, who was convicted of sexually abusing girls and young women athletes.

In an emotional statement, Biles said that in addition to Nassar she blames “an entire system that enabled and perpetrated his abuse.”

“USA Gymnastics and the United States Olympic and Paralympic Committee knew that I was abused by their official team doctor long before I was ever made aware of their knowledge,” Biles told the committee.

The hearing follows a damning Justice Department inspector general report released in July that asserted FBI officials failed to respond “with the utmost seriousness and urgency that they deserved and required,” and made key errors when they did ultimately respond. Days before Wednesday’s hearing, the FBI reportedly fired one of its agents for failing to properly investigate Nassar’s abuse.

Nassar was sentenced in 2017 to 60 years in federal prison on child pornography charges and later sentenced in 2018 to up to 175 years in Michigan state prison after pleading guilty to seven counts of criminal sexual conduct.

In her testimony to senators, Maroney outlined her correspondence with FBI officials in the summer of 2015 during which she provided explicit detail of the abuse. Ultimately, she said, the attacks against her were “minimized and disregarded by the people who were supposed to protect me.” After reports of abuse to the FBI, bureau officials conducted no investigative activity for more than eights months, according to the IG report. During that time, approximately 70 more young athletes were sexually abused by Nassar, the report said.

“What is the point of reporting abuse if our own FBI agents are going to take it upon themselves to bury that report in a drawer?” Maroney said. “They had legal, legitimate evidence of child abuse and did nothing. If they’re not going to protect me, I want to know: Who are they trying to protect?”

“It truly feels like the FBI turned a blind eye to us and went out of its way to help protect USAG and USOPC,” she said. “A message needs to be sent [that] if you allow a predator to harm children, the consequences will be swift and severe. Enough is enough.”

Biles said that when leaders of USA Gymnastics learned that she might be a victim of Nassar, Biles said neither she nor her parents were contacted by USA Gymnastic or by the United States Olympic and Paralympic Committee. At the time she was a member of the 2016 U.S. Women’s Olympics Gymnastics team.

“While others had been informed and investigations were ongoing. I had been left to wonder why I was not told until after the Rio Games,” Biles said.

She referred in her testimony to the long-term effects of the systemic failures that enabled Nassar for so long.

“The scars of this horrific abuse continue to live with all of us,” Biles said. “As the lone competitor in the recent Tokyo games who is a survivor of this horror, I can assure you that the impacts of this man’s abuse are not ever over or forgotten.”

And she left officials with another warning:

“We suffered and continue to suffer because no one at FBI, USAG or the USOPC did what was necessary to protect us,” Biles said. “We have been failed and we deserve answers. Nassar is where he belongs, but those who enabled him deserve to be held accountable. If they are not, I am convinced that this will continue to happen to others across Olympic sports.”

Messages expressing shock and support for the women poured across social media during the Senate hearing. Raisman’s mother tweeted about the difficulty of seeing the testimony.  “Watching your daughter relive the trauma of the abuse + the cover up is horrific,” Lynn Raisman said. “How many more times must they endure this? When is it enough?”

Grace French, a survivor and advocate for survivor protections, said she hopes the attention leads to substantive action.

“I think it’s frustrating a little bit because we are [six] years after the initial report, and we’re still having to call for accountability of institutions, and people who enabled abuse,” said French, who is the founder and president of Army of Survivors, a nonprofit group supporting survivors of sexual violence in sports. She added that she would like to see a criminal investigation into those who did not take appropriate action to respond to Nassar’s abuse. The FBI needs to implement changes so that such delays in sexual abuse investigations do not happen again, she said.

French, Aly Raisman and other survivors are also calling for greater accountability and reporting measures within sports institutions.

In 2012, the United States Olympic and Paralympic Committee launched the SafeSport program, which is meant to improve athlete safety. In 2017, the committee created the nonprofit U.S. Center for SafeSport.

But Raisman in her testimony to senators said she has heard from survivors that reporting abuse to SafeSport is like “playing hot potato, where someone else kicks it over to somebody else and they don’t hear back for a really long time.” Raisman also expressed the need for the center to have greater independence from the U.S. Olympic Committee.

“It’s just a complete mess, and the priority doesn’t seem to be safety and well-being of athletes,” Raisman said. “It seems to be protecting USA Gymnastics and doing everything to keep the PR good.”

French agreed, noting the center’s inefficient reporting and investigatory processes that she says also retraumatize survivors by making them repeat the stories of their abuse multiple times. A survey from the U.S. Center for SafeSport last year found that 93 percent of athletes who experienced sexual harassment or abuse did not submit a formal report or complaint. She wants sports institutions to take broader steps to implement protocols that center the needs of survivors and ensure that survivors have a say in the policies. French hopes the Senate attention will bring about more discussion of ways to prevent abuse beyond the world of sports as well.

Editor’s note: This article was republished from The 19th via a Creative Commons license.