“Within the church, a vacuum on the theology of justice has been created,” said Stuart Greaves, a senior leader at International House of Prayer-Kansas City (IHOP-KC). “The enemy can take advantage of that and sow confusion. As racial conflict in the nation increases, believers need to be equipped to be a voice of wisdom in the days ahead.”

Greaves, who is Black, has spent the last 21 years pursuing a unique calling: helping to sustain 24/7 prayer with worship that has persisted at IHOP-KC since September 19, 1999. The senior church minister helps to lead a congregation that now numbers more than 4,000 alongside founder Mike Bickle. In addition to serving as vice president of the church’s Global Prayer Division, Greaves teaches on the theology of justice.

In a phone interview from his office adjacent to the prayer room, Greaves laments where evangelicals have fallen short and shares how the church can reflect true justice. The transcript has been lightly edited for length.

You’ve preached on biblical justice for decades. How does your approach to justice issues differ from views in the culture and even the church?

Every human heart longs for justice, in one form or another. Justice is more fundamental to the Kingdom of God than we often realize. The Bible says that God’s throne is built on the foundations of justice and righteousness. Those two pillars are the very founding principles of God’s government.

Today, cries for justice are increasing both in and outside the church. I believe biblical justice begins with a certain paradigm. Now, if someone has a cry for justice, this may not be my first response. But in terms of theology, injustice entered into the world when humanity disobeyed God. The greatest injustice is our rebellion against God. If we talk on justice without perceiving that, over time it can get us sidelined in a wrong direction.

Among evangelicals, some are engaged in justice issues and some [are] not. We tend to see a focus more on personal morality, which is vital according to God’s Word. But on social aspects of justice, the White-majority evangelical church tends to shy away from it for reasons that need to be addressed. When I wrote False Justice (Unveiling the Truth about Social Justice), part of what I sought to do was bridge the gap between the pietistic and social concerns of our Christian faith.

This summer, police-involved shootings of Black people and resulting protests have elevated cries for justice. What has been your response?

Today, I have a deep sense of concern for the country and specifically for the Black community. When these incidents have occurred, I see the lack of response within the Body of Christ which results from a lack of equipping.

Christians have a responsibility to be a gospel witness in the midst of racial tension and racial crises. That’s very difficult to do when we only talk about these topics when there’s a flashpoint in the nation. When we understand how integral justice is to the gospel, we will begin to grow in clarity and peace during times of trouble.

The very presence of night and day prayer is a significant action. Many consider prayer to be inaction, but giving yourself to the labor of prayer actually is work. In Colossians 4 verse 12, Apostle Paul speaks about Epaphras. He ties prayer and labor together, saying that Epaphras was always laboring fervently in prayer.

Honestly, I believe intercessors are real heroes and God’s secret weapon—specifically, Black praying grandmothers. Once heaven pulls back the veil of the history of Black women in the U.S., starting from the days of slavery to now, who have contended for God’s kingdom to be manifest, many will be surprised. One story illustrates this.

A few years back, my sister met two Black grandmothers who lived across the street. They got [to] talking about our Bible school. One told her, ‘Oh, we know that place. It used to be a strip mall. Starting in the ‘90s, we’d pray God would use that building for His purposes and touch the nations of the earth.’ That was years before IHOP even started! So, along with others in the Body of Christ, the first thing we do is the labor of prayer.

As to outreach, many at IHOP-KC participate in focused endeavors to take care of and feed the poor. Several are involved with mentoring children in inner city neighborhoods. Various ones are involved in ending human trafficking—not just the awareness of it, but actually running rescue operations and helping in the healing of trafficking victims. We engage in really tangible ways on issues of justice. 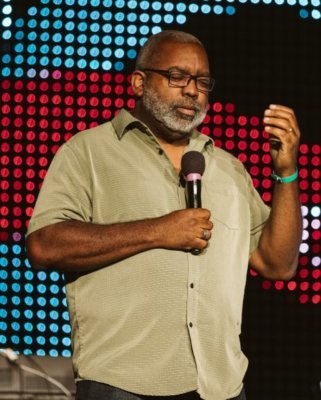 You said you have concerns for communities of color in this hour. Why is that?

The agony that many in the Black community face when it comes to the issue of police shootings is very real. The pain, the silent tears—friends of mine have found themselves awake in the night, only to realize they were weeping silently in their sleep. These flash points trigger emotional trauma. People have their own personal stories of unjust incidents, as do their loved ones. This cycle of trauma can be fatiguing and have all kinds of emotional impacts on our hearts and minds.

My concern starts with: I am a firm believer that things are not going to get better. In Matthew 24, Jesus states clearly that ethnic conflict is a sign of the times which will increase in the nations of the earth. If that is true, then there’s a long road ahead. I think something needs to happen amongst Black believers specifically, where we begin to get a vision of what it means to become wounded healers. We must grab a hold of the gospel in a specific way that actually brings healing to hearts when the trauma comes.

Recently, you’ve been vocal about political idolatry; in a June 14 sermon, you even encouraged the IHOP-KC family to fast from Fox News. During this season, what is your greatest concern about how Christians are mixing faith and politics?

When I address the issue of political idolatry, I’m not urging political inactivity. I use the word idolatry in an intentional way, meaning that which has the confidence, strength, and hope of our hearts.

“Paul warns the church of Galatians, saying: Let’s be careful that we not devour one another, lest we are consumed. And that is what I’m observing right now.”

The wrong comes when we begin to jump on the political bandwagon and get involved in mudslinging: All Democrats are this! All Republicans are that! This ugly slander takes place. In the midst of that, I’m concerned a lot of friendly fire is being released where we’re hitting one another with these political SCUD missiles.

In Matthew 16, Jesus talks about the Pharisees and Sadducees not only as religious and theological groups; they were political groups. The Pharisees were, for lack of a better term, the conservatives of their time and the Sadducees were liberals. Jesus warns his disciples against the yeast—the ideology, teaching, and doctrine—of both, lest that gets into our system. Then, in Galatians 5, Paul talks about how a little leaven will leaven the whole lump. We find that this ‘yeast’ is causing divisions in the church.

Paul warns the church of Galatians, saying: Let’s be careful that we not devour one another, lest we are consumed. And that is what I’m observing right now. The deeper we are digging our heels in, placing our hope and confidence in any political side or ideology, we are inadvertently consuming one another in the church.

Certain Black Christian leaders say they get discouraged seeing the apathy of White evangelicals on race-related justice issues. Do you have reason for hope?

At the risk of sounding trite, I have massive reason for hope simply because Jesus Christ is the head of the church. I am so convinced of that. Now, I’d agree things are difficult today—it can be wearisome to see certain responses. Yet Jesus, in the midst of telling his disciples about the yeast of the Pharisees and Sadducees, he also gave them a prophetic promise. He said: I will build my church.

Today, part of the problem is we’ve heard him say somewhere in that that he’s going to build America. And he didn’t say that. He said: I will build my church. But our eyes are too focused on America. When our nation goes five steps forward, we get encouraged. And when she goes back 40 steps, we sink into a pit of depression. But the Lord says, Hey, I will build my church—in America, and in all nations of the earth.