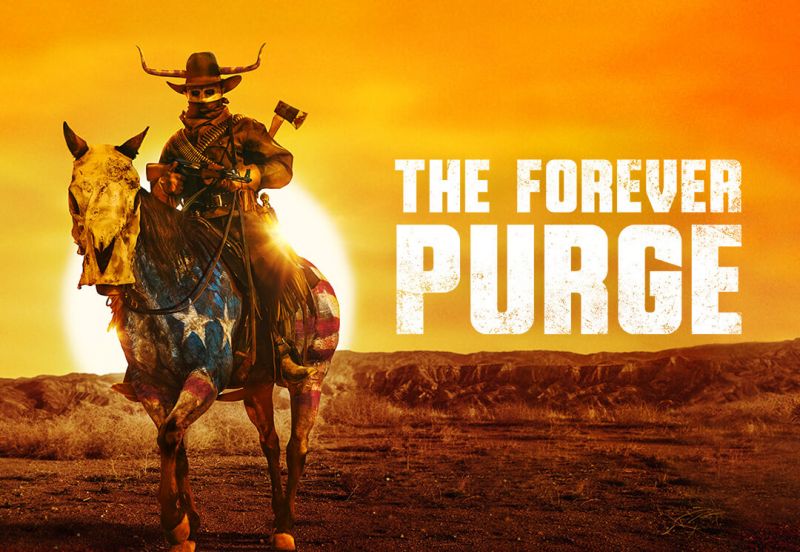 On the surface, the “Purge” movies are pretty ridiculous.

The five-film franchise that began with 2013’s “The Purge” takes place in a near-future America, which allows an annual 12-hour period in which all crimes are legal. According to the conservative New Founding Fathers party, the Purge helped the country recover from near-economic ruin by allowing Americans to release their negative emotions. However, the film quickly reveals this to be a mere rhetorical device, camouflaging the way the Purge lets rich (mostly White) Americans decimate poor (mostly non-White) populations.

For the first three movies, that premise served up more horror-action than any political commentary. But the franchise found its voice with 2018’s “The First Purge.” Released at the height of Trump-inspired racism, “The First Purge” is a blast of righteous anger, in which Black communities fight back against a government that wants to blame them for their own destruction.

“The Forever Purge,” written by franchise creator James DeMonaco and directed by Everardo Valerio Gout, continues in that vein by focusing on the Texas border with Mexico. The film brings together two families: recent Mexican immigrants Juan (Tenoch Huerta) and Adela (Ana de la Reguera), and the White Tuckers, who employ Juan on their ranch. While the family patriarch Caleb (Will Patton) acts like a decent human being, treating his employees with equal respect, his son Dylan (Josh Lucas) openly resents Hispanics.

The movie’s first act follows the familiar “Purge” model, in which everyone locks down during the titular event. We watch as Juan and Adela leave their El Paso home to join with other Hispanics in a bunker, protected by the guards they hired by pooling their resources. As Adela listens to White Purgers drive past the bunker and threaten to “cleanse” America of immigrants, Gout cuts to the Tuckers, who spend the night drinking and dancing behind the steel gates protecting their ranch.