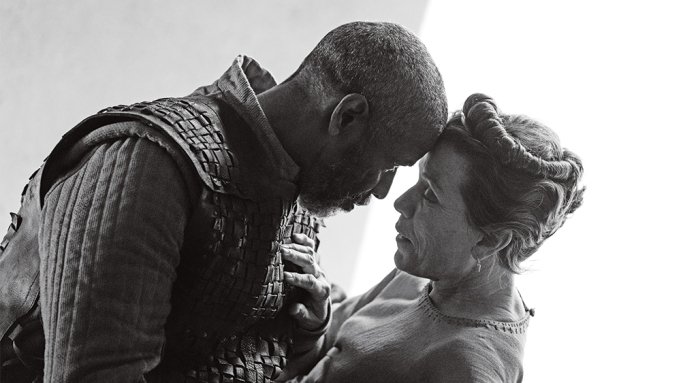 Editor’s note: This commentary may include spoilers.

If one were only listening to The Tragedy of Macbeth, the latest film adaptation of William Shakespeare’s classic play, they wouldn’t find much of it surprising. This version of the story opens with the standard first lines, in which three witches meet to watch the rise and downfall of the titular Scottish lord. Although the actors use their natural accents, resulting in Americans and Irishmen and Englishmen all representing Scotland, director Joel Coen keeps the middle English of the original.

But with one look at one frame of the film, its unique approach to Shakespeare becomes immediately clear. Shot in stark black and white, with the 4:3 Academy ratio (the boxy look used by early films and television shows), The Tragedy of Macbeth feels more like an old Universal horror movie than it does a venerable stage play. Even the characters look different, with Black actors Denzel Washington, Corey Hawkins, and Moses Ingram in key roles.

But as new and fresh as this version of Macbeth may be, it’s fundamentally the same old story. Washington stars as Macbeth, a Scottish lord who, along with his friend Banquo (Bertie Carvel) encounters three witches (each played with chilling ferocity by Kathryn Hunter). The witches foresee that Macbeth will become king of Scotland, a prophecy that confounds Macbeth but invigorates his wife (Frances McDormand). When Duncan, the sitting king of Scotland (Brendan Gleeson) for whom Macbeth has been heretofore loyal, declares his son Malcolm (Harry Melling) as heir to the throne, the Macbeths decide to take matters into their own hands. What follows is a bloody affair, as Macbeth sinks further into depravity and madness, hoping to secure the power promised to him.

Even if you’ve never read a word of Shakespeare, that tale will feel familiar. Maybe you have seen it on stage or in the courts of Scotland, but you’ve certainly seen it in the White House, in corporate boardrooms, and even in churches across America. Time after time after time, people sacrifice other people in pursuit of the power they think they deserve.

Those people would do well to pay closer attention to Macbeth, especially this version. Directing for the first time without his brother Ethan, with whom he created unimpeachable American classics such as Fargo and No Country for Old Men, Joel Coen uses the visual language of German Expressionism. Brutalist walls fill the frame, jagged black lines mark staircases and doors, and characters walk along empty yawning corridors. The castle where most of the play takes place feels like a trap, especially after the Macbeths make their attempt for the throne.

Washington captures that sense of entrapment with rare subtlety. Much older than most actors cast in the role, Washington plays Macbeth as a man unaccustomed to ambition, comfortable with the positions he’s inhabited. His quiet performance may be disarming to some, especially as he tosses off Shakespearean dialogue as if they were thoughtless asides, but his creased brow and downturned mouth betray inner depth.

That depth is on display during the famed “dagger” soliloquy from Act II, Scene I of the play, in which Macbeth finally commits to murdering Duncan. As he begins his long walk down the corridor leading to Duncan’s room, Washington’s Macbeth asks in near whisper, “Is this a dagger which I see before me, the handle toward my hand?” The image of a knife glowing at the end of the corridor does not frighten Macbeth, nor does it embolden him. He holds the indecision as long as possible, refusing to become a coward or a killer. But as he nears the dagger, Washington quickens Macbeth’s pace, letting determination harden in his gaze until at last, he reaches the beckoning knife, which is revealed to be the handle on Duncan’s door. The very next scene finds Macbeth stoic as he sits above Duncan, ready to do his bloody work.

The ambition on display in Macbeth is a selfish work, one that seeks to only shore up systems of oppression. It operates according to what Willie James Jennings calls a 'diseased social imagination,' instead of the Christian imagination of hope and redemption. Click to Tweet

It’s this emphasis on deserving reward and power that makes Coen’s version of Macbeth so powerful. Hunter offers a truly satanic take on the witches, twisting her body in unsettling contortions and describing Macbeth’s destiny in a ragged, chilling voice. Her appearance is so unsettling that Banquo rightly asks, “What, can the devil speak true?” Macbeth disregards the question, to his peril.

For Christian viewers, the demonic nature of the witches and the Macbeths’ horrific downfall is not mere fantasy. To pursue earthly power is to run contrary to the Kingdom of Heaven. Throughout Scripture, we see again and again that God opposes the proud and supports the humble. That point is made most clear when God takes the form of an oppressed Jewish man in Roman-occupied Judea, remaining faithful to even death on a cross to reveal the impotence of Earth’s empires. Jesus put it plainly when he told his disciples to avoid the ways of the “rules of the Gentiles,” who act like tyrants, but to serve one another, “just as the Son of Man came not to be served but to serve, and to give his life a ransom for many.”

None of this suggests that Christians should not strive to change the world. Rather, our work should be done to redeem and reform the systems of the world according to God’s love for all of creation. The ambition on display in Macbeth is a selfish work, one that seeks to only shore up systems of oppression. It operates according to what Willie James Jennings calls a “diseased social imagination,” instead of the Christian imagination of hope and redemption.

With its bleak visuals and committed performances, The Tragedy of Macbeth gives us an unflinching look at the suffering one brings upon themselves and others when engaging in such a selfish pursuit.

Returning to Lady Macbeth after murdering Duncan, a guilt-stricken Macbeth describes the words of two sleeping guards, who said “God bless us” and “Amen” in their dreams. “But wherefore could not pronounce ‘Amen’?” Macbeth asks his wife; “I had most need of blessing, and ‘Amen’ stuck in my throat.”

There, in that cold, confining castle, Macbeth realizes the truth. Even if he gains the throne, he’s already lost his soul, a tragedy played out over and over again.