Trump ‘Chose Not to Act’ as US Capitol Was Attacked, Jan. 6 Panel Says

Trump ‘Chose Not to Act’ as US Capitol Was Attacked, Jan. 6 Panel Says 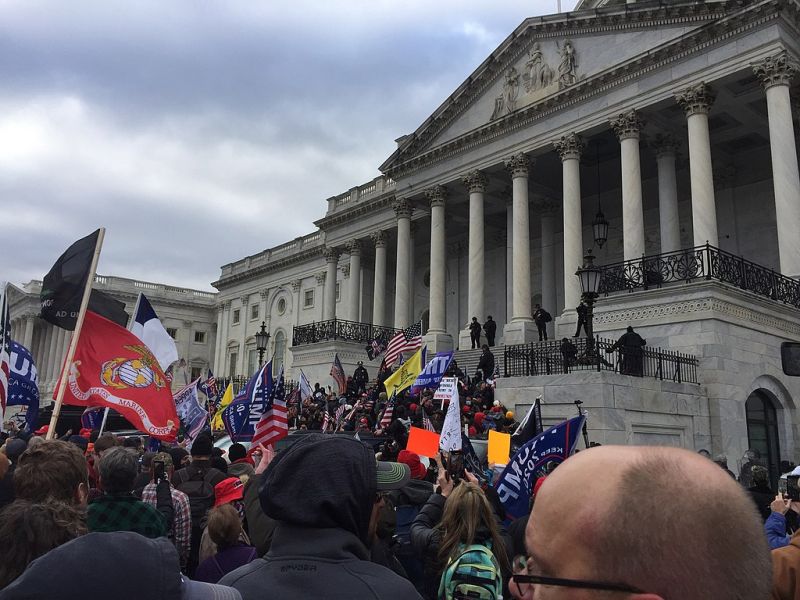 A crowd of Trump supporters march on the U.S. Capitol on January 6, 2021, eventually leading to a violent siege of the building. (Photo: TapTheForwardAssist, CC BY-SA 4.0, via Wikimedia Commons)

Donald Trump ignored White House staff, family members and outside advisers who urged the president to call off the mob attack on the U.S. Capitol on Jan. 6, according to testimony before the U.S. House panel investigating the insurrection at its eighth and final hearing of the summer Thursday night.

Instead, Trump sat in the White House dining room for hours watching the Fox News coverage of the assault, committee leaders said as they laid out new details of the 187 minutes between the end of Trump’s speech on the White House ellipse and his tweet telling rioters to “go home with love and peace.”

Despite the pleas of those closest to him, and despite seeing the violence unfold live on Fox, Trump was unmoved. Trump didn’t fail to act, committee member Adam Kinzinger, an Illinois Republican who co-led Thursday’s hearing, said: “He chose not to act.”

Vice Chair Liz Cheney, a Republican from Wyoming, underscored that Trump’s refusal to condemn the riot was described by dozens of Republican witnesses, “those who served Donald Trump loyally for years,” she said.

“The case against Donald Trump in these hearings is not made by witnesses who were his political enemies. It is instead a series of confessions by Donald Trump’s own appointees, his own friends, his own campaign officials.”

Here are some details that emerged Thursday night:

The committee showed video of U.S. Sen. Josh Hawley of Missouri, hours after pumping his fist in solidarity with Trump supporters, running away from the Senate chamber as the mob approached.

People in the committee hearing room broke out into audible laughter during the footage of Hawley running, which was replayed in slow motion.

Hawley later voted not to certify the election results, and he uses images of his fist pump that day to raise money, putting it on coffee mugs and other items.

Shortly before watching the video of Hawley fleeing, the committee was also told that a member of the U.S. Capitol Police who watched Hawley’s fist pump that day was rattled by it.

“She told us that Sen. Hawley’s gesture riled up the crowd and it bothered her greatly because he was doing it in a safe space protected by the officers and the barriers,” said Democratic U.S. Rep. Elaine Luria of Virginia.

The panel showed outtakes from Trump’s video message to supporters telling them to leave the Capitol, and from an address the next day. Even as he prepared for those statements, he refused to concede he lost the election.

“I don’t want to say the election is over,” he said in a Jan. 7 outtake, reacting to a line speechwriters included. “I just want to say, ‘Now Congress has certified the results,’ without saying.”

The unsubstantiated claim that Trump’s 2020 election loss to Joe Biden was illegitimate — and that somehow the result could be overturned — was the concept that motivated the attack.

Sarah Matthews, a former communications official for Trump’s reelection campaign who was in the White House on Jan. 6, said she had seen at rallies the power Trump had over his supporters.

“He was the only person in the world who could call off the mob he sent to the Capitol,” Thompson said.

A White House official with national security responsibilities relayed a harrowing account of Vice President Mike Pence’s Secret Service detail. Pence was at the Capitol to conduct his ceremonial role to certify the election results, which Trump was strongly pressuring him not to do.

The official, whose identity the committee did not disclose because the official feared retribution, heard chaos at the Capitol over a radio.

“There were a lot of there was a lot of yelling a lot of a lot of very personal calls over the radio,” the official said. “I don’t like talking about it, but they were calling to say goodbye to family members.”

The rioters’ anger was focused on Pence, U.S. Rep. Elaine Luria, a Virginia Democrat who co-led Thursday’s hearing, said, after Trump tweeted at 2:24 p.m. that Pence didn’t have “the courage” to overturn the vote. “He put a target on his own vice president’s back,” Luria said.

The panel showed video of Secret Service agents hustling Pence and his team to a secure location.

The top White House lawyer decided against stepping down because he was worried about who would replace him, he told the panel in taped testimony.

The White House phone log does not include any entries from 11:06 a.m. to 6:54 p.m., though the president was making and taking calls during those hours, the committee said.

Former White House press secretary Kayleigh McEnany said in a taped deposition that she gave Trump a list of senators and that the president called them to urge them not to certify the election results.

Alabama Republican U.S. Sen. Tommy Tuberville said on a local television news station in February that Trump called him as he prepared to evacuate the Capitol.

The committee also has phone records of Trump attorney Rudy Giuliani, which show the two spoke twice in that timeframe.

And the official White House photographer was told not to take photographs as Trump went into the Rose Garden to record a video message to supporters.

See you in September

The panel will not hold another public hearing until September, Chairman Bennie G. Thompson, a Mississippi Democrat, said. Thompson, who has tested positive for COVID-19, appeared virtually.

The panel will continue its work over Congress’ August recess, Cheney said.

Editor’s note: This article was republished from the Missouri Independent under a Creative Commons license.