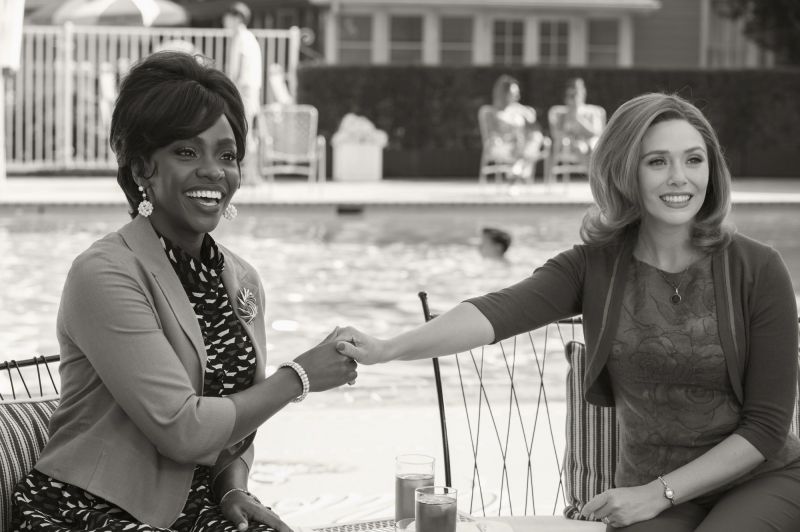 As a TV series that mixes the spectacle of the Marvel Cinematic Universe with homages to classic sitcoms, the Disney+ series “WandaVision” seems like a perfect escapist fantasy. Each of the seven episodes aired thus far has placed Wanda Maximoff (Elizabeth Olsen) and her husband Vision (Paul Bettany) from the “Avengers” films in comedic farces based on sitcoms such as “The Dick Van Dyke Show,” “Bewitched,” and “Malcolm in the Middle.”

But the series’ tone abruptly shifts in episode three. In the middle of a romp inspired by “The Brady Bunch,” involving Wanda’s whirlwind pregnancy and an obtrusive stork, the White main character turns to her Black neighbor and says, “I think you should leave.”

Up until that point, neighbor Geraldine (Teyonah Parris) has been a welcome new addition to the suburban town of Westview. But when lost memories suddenly return to Geraldine and she begins talking about Wanda’s late brother Pietro (who died in the movie “Avengers: Age of Ultron”), our protagonist gets uncomfortable. Clearly confused, Geraldine tries to make herself useful to Wanda, offering to watch her newborn twins while she rests. But Wanda feels threatened and scared. She turns to the apologetic Geraldine, her face hardening to her neighbor’s explanations, red light emanating from her hands.

The next thing we know, Geraldine is gone and Wanda watches lovingly over the babies, safety once again restored. The episode ends with Geraldine being launched through the sky and landing outside the neighborhood.

Suburbia Beyond the Sitcoms

Later episodes explain Wanda’s actions in terms of superhero intrigue. We learn that Geraldine’s real name is Monica Rambeau and that she was sucked into this alternate reality while investigating an invisible field separating Westview from the rest of the world. Once inside, her memories disappeared and she became Geraldine, a kooky neighbor in a world seemingly under Wanda’s control.